July 29, 2021 Ridley's Believe It Or Not Earth Overshoot Day

Standing: On a deaths per million population measure on a steady   but slow climb to 1886 the U.S. ranks behind Peru (5861) the new number 1 which has had a quantum leap in deaths previously unmatched which was a change in the classification to give Peru the a new method of reporting to have a fatality rate of 9.31% of total cases now; Hungary the new number 2 has had a huge continuing surge in deaths with the increase now slowing down and improving slightly to  3.86% of its closed cases have died (3117), aping Hungary in terms of increase in deaths Bulgaria (2641),   Brazil (2583) which has been hit with a rapid rise in deaths and cases and passed us and Italy, Columbia newly added to the list (2328);  Argentina (2297), Belgium (2167), (Italy (2121), Poland (1991), and the UK (1897) which had passed us despite leading world in testing and now has new deaths barely increasing),  and slightly better than Mexico (1838), Chile (1822), Romania (1795),  Spain (1740),  France (1707), Portugal (1705), Bolivia (1499),  Sweden (1438) that never closed its economy down like we did, and Switzerland (1250).
Tests: We have now conducted 527,154,538 (now at 1,582,654/M) compared to number 2 now France at 1,572,867 we are conducting more tests in number and on a per capital basis for all nations (other than those nations that contain small populations like Bahrain, Denmark, Israel, Malta, Singapore and UAE) other than the U.K. which remains as king of the mountain with respect to tests at 3,561,987/M.
CV Open Gate: Lost in the pronouncements by Biden and his lackeys   that there is no crisis of illegals surging across the border is that fact that COVID-19 is alive and well and spreading in the Northern Triangle and Mexico which been passed by Argentina to move down to 11th  on my list of deaths from the pandemic  at 1838/M with a fatality rate of 9.90% of closed cases and the 3 countries in the Northern Triangle in terms of active cases and deaths per million are as follows even though the data may be suspect as underreported (regardless of number we need no more cases):
Guatemala:  Active Cases:  34,135 Deaths/M 560
Honduras:    Active Cases: 186,139 Deaths/M 770
El Salvador:  Active cases:     7,404 Deaths/M 399
US Vaccinations: As of 7/28/21 343.4 million doses at .608 million per day (7 months to go for 75% of population vaccinated) and in California 77,525 per day which means if the rate does not increase it will take us now some 5 months to have 75% of the population of California vaccinated which many believe is necessary to develop herd immunity (other than Flip Flop Fauci who may believe that 90% is required).  In California 44,761,604 total doses have been given (88.5% of doses received to exceed the U.S. average of 86.9%), but even with the pressure of a recall to be scheduled this fall which hopefully end Newsom’s term, California has  moved  down from 18th to 19th  of the 50 states in terms of the percentage of doses administered as a percentage of doses delivered to the states and at 52.5% of its population fully vaccinated compared to the U.S. average of 49.3% is still 17th tied with Delaware among the 50 states.  A long way to go still to get herd immunity in terms of getting vaccines received into arms and the percentage of the population fully vaccinated compared to other states which means a great reason to recall this inept and hypocritical governor.
Non  CV News: Pelosi has directed the Capitol Police to arrest members of Congress, staff and visitors who are not wearing masks regardless of vaccine status (unlike the sheriffs and chiefs of police in many jurisdictions with mandatory mask requirements regardless of vaccine status who will not enforce the mandate expect the chief of the Capitol Police to bow to Pelosi’s wishes); SCOTUS has ruled 5-4 that the rent eviction prohibitions cannot be extended past July 30 without congressional action (many tenants will be in a world of hurt but so will many noncorporate owners of rental property deprived of their rental income by not being able to evict nonpaying tenants and replacing them with those who can pay); Biden’s Consumer Financial Protection Bureau is under fire for terminating top career employees and replacing them with Biden loyalists and then refusing to provide documents to Red members of Congress inquiring into the matter (no surprise that a career politician like Biden would condone such acts); the AFT’s President and School Kids Hostage Taker in Chief appears to be backpedaling on her goal to open schools for in person learning in the fall over the CDC’s flip flopping on mask requirements; sadly like the shootings in our urban centers, violence against flight attendants is on the rise on airlines, prompting the flight attendants’ union to file complaints with the FAA and DOJ (the days of “Coffee, Tea or Me” have long since faded away); the CBP inspecting the container ship Pan Jasmine which had arrived in New Orleans with some of its cargo infested with a type of Asian beetles and ants that have been a threat to American trees and lumber for years and immediate ordered the vessel out of U.S. waters; Merrick Garland has immediately indicated the DOJ will challenge Governor Abbot’s executive order banning the transportation of illegal aliens infected with COVID-19 (only in America have our political idiots forced vaccinated Americans to wear mask while welcoming maskless illegals infected by the virus to enter and stay in the U.S.); as blues seem to be in a mad rush to impose mask requirements under the guise of “follow the science” leave it to the political cartoonist to point out the idiocy of their position: 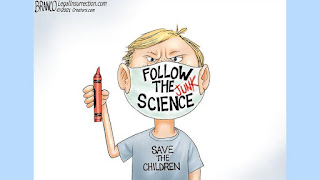 Chicago Gun Violence: Hey Jackass.com is alive and well to collect data to show that through July 27, 2021, gun violence involving mostly persons of color shooting mostly persons of color in Chicago is alive and well with 2511 persons shot of whom 431 have died.
As always, I hope you enjoy today’s holidays and observances, factoids of interest for this day in history, a video recording musical link to “Alone Again (Naturally)” by Gilbert O’Sullivan,  the fact that you could never be accused of being a scaramouch, and a quote by Jack Paar on doing The Tonight Show, secure in the knowledge that if you want to send a gift for any memorable events like Labor Day, college graduations, birthdays, weddings, or anniversaries, you know that the Alaskanpoet can provide you with a unique customized poem at a great price tailored to the event and the recipient. Please contact me for details on pricing.
1.  National Intern Day—created by the Way Up International and celebrated on the last Thursday in July since 2017 to promote the hiring of interns while still in college to bridge the gap between the classroom and the boardroom and to foster the career advancement of interns.
2.  Earth Overshoot Day—created by Andrew Simms to mark the day when the demand for ecological resources exceeds the amount the Earth can regenerate and was observed on this day in 2021 breaking the trend to have the milestone occurring earlier each year due to the slow down of the world economy and the increased number of deaths caused by the pandemic of COVID-19.
3. 1972 Number 1 Song USA—the number 1 song in 1972 on this day was “Alone Again (Naturally)” by Gilbert O’Sullivan on a run of 4 weeks in that position to join 20 other songs that achieved number 1 status and join 17 other acts who achieved their first number 1 song on the Billboard Hot 100. Here is a video recording by Gilbert O’Sullivan of “Alone Again (Naturally)”:  https://www.youtube.com/watch?v=D_P-v1BVQn8 O’Sullivan started performing in 1967 and after 19 albums and numerous top hot hits is still going strong at age 74.
4.  Word of the Day—the word of the day is “scaramouch” which means a scoundrel or rascal which carefully describes almost phonetically fired former Trump adviser Scaramucci.
5.  Marathon Man--celebrating the birth on this day in 1938 of Peter Jennings noted TV newsman and anchor of ABC World News Tonight from 1983 to 2005 and best remembered for his marathon broadcast of the New Year’s Eve Millennium Special and his 17 hours of continuous coverage of the 9/11 attacks but a heavy smoker who after quitting for 20 years picked up the habit again following 9/11 and died from lung cancer on August 7, 2005 after ending his stint as anchor on April 1, 2005.
On this day in:

a. 1948 after a 12 year break due to World War II, the Summer Olympics resumed with the XV Olympiad opening in London.
b. 1957  Jack Paar began hosting The Tonight Show, which he continued to do until March 29, 1962. When he died Time’s obituary included the observation perhaps strongly contested by fans of Johnny Carson that “His fans would remember him as the fellow who split talk show history into two eras: Before Paar and Below Paar.”
c. 1981 an estimated 700 million viewers watched the marriage of Charles, the Prince of Wales, to Lady Dianna Spencer at London’s St. Paul Cathedral.

d. 1987 English Prime Minister Margaret Thatcher and French President Francois Mitterrand signed an agreement to construct a tunnel linking the two nations under the English Channel.
e.  1996 the child protection provisions contained in the Communications Decency Act were struck down by a federal court as being too broad.
Reflections on The Tonight Show: “Doing the show was like painting the George Washington Bridge. As soon as you finished one end, you started right in on the other.” Jack Paar.
Please enjoy the poems on events of interest on my twitter account below (if you like them, retweet, and follow me) and follow my blogs. Always good, incisive and entertaining poems on my blogs—click on the links below. Go to www.alaskanpoet.blogspot.com for Ridley’s Believe It Or Not—This Day in History,  poems to inspire, touch, emote, elate and enjoy and poems on breaking news items of importance or go to  Ridley's Believe It Or Not for just This Day in History.

© July 29, 2021 Michael P. Ridley aka The Alaskanpoet
Alaskanpoet for Hire, Poems to Admire
Poet Extraordinaire, Beyond Compare
A Unique Gift, All Recipients a Lasting Gift

Posted by Michael P. Ridley aka the Alaskanpoet at 9:14 AM