Standing: On a deaths per million population measure on a steady   but slow climb to 1882 the U.S. ranks behind Peru (5855) the new number 1 which has had a quantum leap in deaths previously unmatched which was a change in the classification to give Peru the a new method of reporting to have a fatality rate of 9.32% of total cases now; Hungary the new number 2 has had a huge continuing surge in deaths with the increase now slowing down and improving slightly to  3.87% of its closed cases have died (3116), aping Hungary in terms of increase in deaths Bulgaria (264039),   Brazil (2568) which has been hit with a rapid rise in deaths and cases and passed us and Italy, Argentina (2273), Belgium (2166), (Italy (2120), Poland (1990), and the UK (1892) which had passed us despite leading world in testing and now has new deaths barely increasing),  and slightly better than Mexico (1828), Chile (1816), Romania (1794),  Spain (1736),  France (1706), Portugal (1701, Bolivia (1489),  Sweden (1438) that never closed its economy down like we did, and Switzerland (1250).
Tests: We have now conducted 523,608,953 (now at 1,573,784/M) compared to number 2 now France at 1,550,973 we are conducting more tests in number and on a per capital basis for all nations (other than those nations that contain small populations like Bahrain, Denmark, Israel, Malta, Singapore and UAE) other than the U.K. which remains as king of the mountain with respect to tests at 3,468, 873/M.
CV Open Gate: Lost in the pronouncements by Biden and his lackeys   that there is no crisis of illegals surging across the border is that fact that COVID-19 is alive and well and spreading in the Northern Triangle and Mexico which been passed by Argentina to move down to 11th  on my list of deaths from the pandemic  at 4182/M with a fatality rate of 10.09% of closed cases and the 3 countries in the Northern Triangle in terms of active cases and deaths per million are as follows even though the data may be suspect as underreported (regardless of number we need no more cases):
Guatemala:  Active Cases:  34,845 Deaths/M 553
Honduras:    Active Cases: 181,611 Deaths/M 754
El Salvador:  Active cases:     6,409 Deaths/M 392
US Vaccinations: As of 7/25/21 341.8 million doses at .590 million per day and in California 77,162 per day which means if the rate does not increase it will take us now some 5 months to have 75% of the population of California vaccinated which many believe is necessary to develop herd immunity (other than Flip Flop Fauci who may believe that 90% is required).  In California 44,661,671 total doses have been given (88.4% of doses received to exceed the U.S. average of 86.7%), but even with the pressure of a recall to be scheduled this fall which hopefully end Newsom’s term, California has finally has  not moved from  19th of the 50 states in terms of the percentage of doses administered as a percentage of doses delivered to the states and at 52.3% of its population fully vaccinated compared to the U.S. average of 49.1% has moved down from 17th tied with Delaware to 18th tied with Delaware among the 50 states.  A long way to go still to get herd immunity in terms of getting vaccines received into arms and the percentage of the population fully vaccinated compared to other states which means a great reason to recall this inept and hypocritical governor.
Non  CV News: As the Delta variant continues to spread and infections among the unvaccinated continue to surge, Fauci was revealing that new mask mandates are being considered indoors and outdoors as Los Angeles is requiring masks indoors and outdoors; Blue Texas Rep Philip Cortez has returned to the State of Texas and is supposedly not facing arrest as Governor Abbot had threatened to continue discussions with Reds to lessen the false claims of “voter suppression (Reds have to talk about voter security as illegal voting cancels out legitimate votes); black Jarvis Johnson, Texas Blue who also returned to Texas was on MSNBC saying he is fearful that some “rural” cop is going to harm his son to become a Red hero (typical racist card attack coupled with a racist smear against police that he should be ashamed making); in disturbing news, William Freidman, the architect who designed Champlain Towers South was suspended in 1967 for gross incompetence of a building that had its pylons collapse in a hurricane; a flight preparing to leave SFO for Orlando after several passages received a text message of an Airsoft gun from a teen on board the plane via Airdrop out of an abundance of caution has everyone removed from the plane, rescreened then reboarded save the teen who sent the texts; Momentus discovered that it may be easier to launch satellites into space that get a suspect IPO by the SEC as the company pulled its IPO undercharges the company failed to disclose technology risks, misstated the existence of customers and neglected to inform investors the founder was a deemed security risk (not to let the dream die, the company is going to use a SPAC to take the company public albeit at a closer to Earth valuation); Feces City is considering a congestion tax on high paid drivers who enter the city along with a plan to procure high tech trash cans at $20,000 a pop (the only thing keeping California alive is Silicon Valley and the more cities like SFO seek to slice more and more of the Golden Eggs the more likely the entrepreneurs will leave and take the high paying jobs with them; angered Hamas’ low tech solution to attack Israel with balloon bombs like the Japanese the Pacific Northwest in World War II, Israel has unleashed its high tech planes and bombs to attack Hamas bases in Gaza; spend a little time in Feces City or the homeless tent cities in Venice and you cannot escape the solution that the Golden State is misnamed and should become the Iron Pyrite State as the political cartoonist so aptly portrays the reality of the rot: 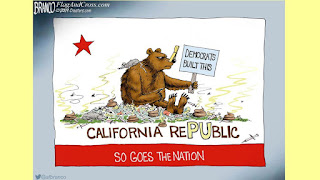 Chicago Gun Violence: Hey Jackass.com is alive and well to collect data to show that through July 24, 2,021, gun violence involving mostly persons of color shooting mostly persons of color in Chicago is alive and well with 2454 persons shot of whom 422 have died.
As always, I hope you enjoy today’s holidays and observances, factoids of interest for this day in history, a video recording musical link to “Grazing in the Grass” by Hugh Masekela,  the fact that you are not exposed to saturnism, and a quote by is  James Watson on in vitro fertilization, secure in the knowledge that if you want to send a gift for any memorable events like Labor Day, college graduations, birthdays, weddings, or anniversaries, you know that the Alaskanpoet can provide you with a unique customized poem at a great price tailored to the event and the recipient. Please contact me for details on pricing.
1.  Reek Sunday—can annual pilgrimage that has been held of the last Sunday in July in Ireland where some 15,000-30,000 in honor of St. Patrick’s fasting on Croagh Patrick in County Mayo for 40 days in 441 climb the mountain.
2.  National Hire a Vet Day—created by Hire Our Heroes on June 5, 2017 and celebrated on this day since 2017 to promote the hiring of our vets who have the skills and training to be a valuable contribution to any employer.
3. 1968 Number 1 Song USA—the number 1 song in 1968 on this day was “Grazing in the Grass” Hugh Masekela on a run of 2 weeks in that position to join 15 other songs that achieved number 1 status and join 9 other acts, including the first ever awarded posthumously to Otis Redding, who achieved their first number 1 song on the Billboard Hot 100. Here is a recording  by Hugh Masekela of “Grazing in the Grass”:  Masekela, born in South Africa, was a noted  South African trumpeter, flugelhornist, cornets, singer and composer called by many as the “father of South African Jazz. He performed at the 1967 Monterey Pop Festival and blew his last note on January 23, 2018 at age 78 due to prostate cancer.
4.  Word of the Day—the word of the day is “saturnism” which means lead poisoning which the residents of Flint, Michigan sadly had to endure given the sad nature of their water system.
5.  From A Trailer Park Too Young a Star--celebrating the birth on this day in 1982 of child star Brad Renfro who came out of a trailer park with no acting experience to star in The Client at age 11 and to go on to appear in 21 feature films before alcohol and drugs got the best of him to die of acute alcohol and drug intoxication on January 15, 2008 at the age of 25.

On this day in:
a. 1965 in a major shift in pop music, iconic singer Bob Dylan used an electric guitar at the Monterey Pop Festival.
b. 1969 in the perhaps the first step in the realization following the Tet Offensive that the Vietnam War was not winnable at home, President Nixon announced the Nixon Doctrine which stated the U.S. expected its Asian allies to provide for their own defense as it would begin the Vietnamization of the war.
c. 1978 to the joy of infertile couples everywhere, Louis May Brown, the first person conceived with in vitro fertilization, was born in London and is still alive today at the age of 43.

d. 2000 Air France Flight 1450 chartered to take passengers to NYC to board a cruise ship ran over debris on the runway while taking off, blowing out a tire which sent debris into the landing bay, causing rupture of fuel tanks which caught fire crashing the plane into a nearby hotel in the Concorde’s first crash in 27 years, killing all aboard and 4 in the hotel along with 6 injuries. 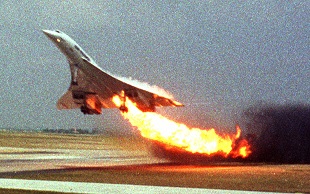 e.  2010 WikiLeaks published 91,000 classified documents about the U.S. War in Afghanistan and despite efforts by the U.S. the leaker has not been identified.
Reflections on a prediction that has come true in spades for countless couples : “One-third of all female infertility is the result of blocked fallopian tubes. If fertilization could be done in the lab and then the fertilized egg implanted in the womb, it would get around that problem. Millions of women who cannot have children would suddenly be able to.” James D. Watson, noted American micro biologist who with Frick revealed the double helix structure of the DNA molecule.
Please enjoy the poems on events of interest on my twitter account below (if you like them, retweet, and follow me) and follow my blogs. Always good, incisive and entertaining poems on my blogs—click on the links below. Go to www.alaskanpoet.blogspot.com for Ridley’s Believe It Or Not—This Day in History,  poems to inspire, touch, emote, elate and enjoy and poems on breaking news items of importance or go to  Ridley's Believe It Or Not for just This Day in History.

Alaskanpoet for Hire, Poems to Admire
Poet Extraordinaire, Beyond Compare
A Unique Gift, All Recipients a Lasting Gift

© July 25, 2021 Michael P. Ridley aka The Alaskanpoet
Alaskanpoet for Hire, Poems to Admire
Poet Extraordinaire, Beyond Compare
A Unique Gift, All Recipients a Lasting Gift

Posted by Michael P. Ridley aka the Alaskanpoet at 12:35 PM