Standing: On a deaths per million population measure on a steady   but slow climb to 1874 the U.S. ranks behind Peru (5823) the new number 1 which has had a quantum leap in deaths previously unmatched which was a change in the classification to give Peru the a new method of reporting to have a fatality rate of 9.36% of total cases now; Hungary the new number 2 has had a huge continuing surge in deaths with the increase now slowing down and improving slightly to  3.89% of its closed cases have died (3115), aping Hungary in terms of increase in deaths Bulgaria 2635),   Brazil (2517) which has been hit with a rapid rise in deaths and cases and passed us and Italy, Argentina (2207), Belgium (2165), (Italy (2118), Poland (1989), and the UK (1884) which had passed us despite leading world in testing and now has new deaths barely increasing),  and slightly better than Mexico (1807), Romania (1793), Chile (1774), Spain (1734),  France (1703), Portugal (1691),  Sweden (1437) that never closed its economy down like we did, Bolivia (1465) and Switzerland (1250).
Tests: We have now conducted 515,212,026 (now at 1,547,119/M) compared to number 2 now France at 1,493,104/M) as we are conducting more tests in number and on a per capital basis for all nations (other than those nations that contain small populations like Bahrain, Denmark, Israel, Malta, Singapore and UAE) other than the U.K. which remains as king of the mountain with respect to tests at 3, 356,593/M.
CV Open Gate: Lost in the pronouncements by Biden and his lackeys   that there is no crisis of illegals surging across the border is that fact that COVID-19 is alive and well and spreading in the Northern Triangle and Mexico which been passed by Argentina to move down to 11th  on my list of deaths from the pandemic  at 1807/M with a fatality rate of 10.32% of closed cases and the 3 countries in the Northern Triangle in terms of active cases and deaths per million are as follows even though the data may be suspect as underreported (regardless of number we need no more cases):
Guatemala:  Active Cases:  31,720 Deaths/M 539
Honduras:    Active Cases: 174,633 Deaths/M 731
El Salvador:  Active cases:     5,042 Deaths/M 379
US Vaccinations: As of 7/15/21 336.0 million doses at .530 million per day down from .533 million per day which means if the rate does not increase it will take us now some 9 months to have 75% of the population vaccinated which many believe is necessary to develop herd immunity (other than Flip Flop Fauci who now believes that 90% is required).  In California 43,692,413 total doses have been given (87.9% of doses received to exceed the U.S. average of 86.6%), but even with the pressure of a recall to be scheduled this fall which hopefully end Newsom’s term, California has finally has not moved from 18th of the 50 states in terms of the percentage of doses administered as a percentage of doses delivered to the states and at 51.2% of its population fully vaccinated compared to the U.S. average of 48.1% has not moved from 18th  among the 50 states.  A long way to go still to get herd immunity in terms of getting vaccines received into arms and the percentage of the population fully vaccinated compared to other states which means a great reason to recall this inept and hypocritical governor.
Non  CV News: Looks more and more like social media giants are working hand in glove with the Biden Administration as Psaki revealed that it is working with Facebook to flag posts believed by it to contain false information concerning COVID-19 (very dangerous slope especially when Fauci has become the flip flop king); after ranting that De Santis would kill millions of Floridians, AFT head Weingarten has backtracked that inane rant; the Red Speaker of the Texas House has chartered a plane and demanded the fugitive Blues board it and come back to Texas; after the BLM seems to once again throw its support behind the Cuban government’s crackdown of its people. AOC pipes in with a tepid condemnation of the government’s acts but blames Trump for the legacy of sanctions that have injured the Cuban economy; Costas who infected sports reporting with the cancer of leftist bias, is back with CNN ranting the about “delusional” Republicans; Richard Sherman former Stanford great and Pro Bowl cornerback has been released from jail after being arrested for domestic violence but will not be facing felony charges; Oliver Daemen will replace the anonymous donor who paid $28 million for a seat of Bezos' Blue Horizon Space Ship that will launch with Bezos aboard later this month; as Miami is in a full court press to examine the structural integrity of all residential structures 5 stories or more in height, an apartment building built in 1972 but only 3 stories tall suffered a partial roof collapse; in a taking the law into your own hands moment in Detroit, Bianca Chambers found her stolen Mercedes and the suspect who stole it and after slashing the tires so he could not drive away, went into the barbershop where he had entered and dragged him out by his dreadlocks as patrons assisted her in making a citizen’s arrest until police arrived; a police responding to 911 calls that a man along the Hollywood Walk of Fame was displaying a gun shot and killed him after he pointed what turned out to be a replica but not a real gun (aping Sean Connery in The Untouchables astute line about fools bringing a knife to a gunfight what was this idiot thinking to point a realistic replica gun at police with drawn weapons?); as Cubans shout for freedom and display American Flags in Havana, leave it to the political cartoonist to display the pathetic response of our notable leftists: 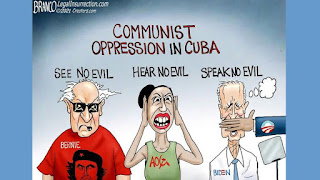 Chicago Gun Violence: Hey Jackass.com is alive and well to collect data to show that through July 14, 2,021, gun violence involving mostly persons of color shooting mostly persons of color in Chicago is alive and well with 2137 persons shot of whom 387 have died.
As always, I hope you enjoy today’s holidays and observances, factoids of interest for this day in history, a video recording musical link to “Roses Are Red (My Love)” by Bobby Vinton,  the fact that you are blessed with sapience and a quote by Maurice Maeterlinck, secure in the knowledge that if you want to send a gift for any memorable events like Fourth of July, college graduations, birthdays, weddings, or anniversaries, you know that the Alaskanpoet can provide you with a unique customized poem at a great price tailored to the event and the recipient. Please contact me for details on pricing.
1.  Rural Transit Day—created by Rural Transit Assistance Program in 2019 to commemorate the creation of the National Rural Transit Assistance Program to provide transportation services for those unable to drive in rural communities (wonder it is used to help rural voters Kamala Harris worries about to be able to find Kinkos and Office Max stores to duplicate their IDs for voting that no longer are in business). employment more to their ideals.
2.  National Fresh Spinach Day—honoring that vitamin, iron and fiber rich plant so delicious in salads and omelets or sautéed by itself and far better for you than the cans Popeye the Sailor Man consumed before dealing with problems faced.
3. 1962 Number 1 Song USA—the number 1 song in 1962 on this day was “Roses Are Red (My Love)”  by Bobby Vinton on a run of 4 weeks in that position to join 20 other songs that achieved number 1 status and 13 other acts with their first number 1 song on the Billboard Hot 100. Here is a recording  by Bobby Vinton of “Roses Are Red (My Love): https://www.youtube.com/watch?v=tbZUTs8FFOA Vinton was known as “The Polish Prince” and from 1962-1972 had more number 1 songs than any male vocalist. Vinton still with us living in Florida at age 86 with his wife Delores of 59 years.
4.  Word of the Day—the word of the day is “sapience” which means discernment or judgment, traits that seem to have fled to the high hills in Washington on both sides of the aisle.
5.  Joyless Division--celebrating the birth on this day in 1956 of noted singer, songwriter and musician Ian Curtis who was the lead vocalist for the punk metal rock band Joy Division but who suffered epilepsy and depression and committed suicide on May 18, 1960, the eve of the band’s first North American tour.

On this day in:
a. 1834 after 356 years of terror and several thousand executions, the Spanish Inquisition was finally officially disbanded.
b. 1916 William Boeing and George Allen Westervelt incorporated Pacific Aero Products Company which changed its name to the Boeing Company when Westervelt left the company after being transferred to the East Coast by the USN.
c. 1959 in a shoot themselves in the foot moment the USW launched a national strike of steel workers which ended after 116 days with nominal wage increases but had the disastrous effect to steelworkers and steel manufacturers of forcing steel user to begin importing foreign made steel in larger numbers at lower cost and lead to the decline of our domestic steel industry and work force.

d. 1979 President Carter addressed the nation on what he termed its lack of confidence which speech although the term was never used became known as “the malaise speech”.
e.  2006 Twitter which sadly would become the bane of censorship to conservatives was launched.

Reflections on the Spanish Inquisition: “The decent moderation of today will be the least of human things tomorrow. At the time of the Spanish Inquisition, the opinion of good sense and of the good medium was certainly that people ought not to burn too large a number of heretics; extreme and unreasonable opinion obviously demanded that they should burn none at all.” Maurice Maeterlinck, 20th Century Belgian poet and playwright who won the 1911 Nobel Prize for literature.

© July 15, 2021 Michael P. Ridley aka The Alaskanpoet
Alaskanpoet for Hire, Poems to Admire
Poet Extraordinaire, Beyond Compare
A Unique Gift, All Recipients a Lasting Gift

Posted by Michael P. Ridley aka the Alaskanpoet at 12:43 PM