Standing: On a deaths per million population measure on a steady   but slow climb to 1873 the U.S. ranks behind Peru (5823) the new number 1 which has had a quantum leap in deaths previously unmatched which was a change in the classification to give Peru the a new method of reporting to have a fatality rate of 9.36% of total cases now; Hungary the new number 2 has had a huge continuing surge in deaths with the increase now slowing down and improving slightly to  3.89% of its closed cases have died (3115), aping Hungary in terms of increase in deaths Bulgaria 2634),   Brazil (2510) which has been hit with a rapid rise in deaths and cases and passed us and Italy, Argentina (2197), Belgium (2165), (Italy (2117), Poland (1989), and the UK (1883) which had passed us despite leading world in testing and now has new deaths barely increasing),  and slightly better than Mexico (1805), Romania (1792), Chile (1766), Spain (1733),  France (1703), Portugal (1690),  Sweden (1437) that never closed its economy down like we did, Bolivia (1460) and Switzerland (1250).
Tests: We have now conducted 515,562,806 tests (now at 1,545,194/M) compared to number 2 now France at 1,487,118/M) as we are conducting more tests in number and on a per capital basis for all nations (other than those nations that contain small populations like Bahrain, Denmark, Israel, Malta, Singapore and UAE) other than the U.K. which remains as king of the mountain with respect to tests at 3, 338,879/M.
CV Open Gate: Lost in the pronouncements by Biden and his lackeys   that there is no crisis of illegals surging across the border is that fact that COVID-19 is alive and well and spreading in the Northern Triangle and Mexico which been passed by Argentina to move down to 11th  on my list of deaths from the pandemic  at 1805/M with a fatality rate of 10.32% of closed cases and the 3 countries in the Northern Triangle in terms of active cases and deaths per million are as follows even though the data may be suspect as underreported (regardless of number we need no more cases):

US Vaccinations: As of 7/14/21 335.5 million doses at .548 million per day finally up from .533 million per day which means if the rate does not increase it will take us now some 8 months to have 75% of the population vaccinated which many believe is necessary to develop herd immunity (other than Flip Flop Fauci who now believes that 90% is required).  In California 43,767,439 total doses have been given (88.0% of doses received to exceed the U.S. average of 86.6%), but even with the pressure of a recall to be scheduled this fall which hopefully end Newsom’s term, California has finally has not moved from 18th of the 50 states in terms of the percentage of doses administered as a percentage of doses delivered to the states and at 51.3% of its population fully vaccinated compared to the U.S. average of 48.2% has  moved up from 18th   to 17th tied with Delaware among the 50 states.  A long way to go still to get herd immunity in terms of getting vaccines received into arms and the percentage of the population fully vaccinated compared to other states which means a great reason to recall this inept and hypocritical governor.
Non  CV News: Searchers at the collapsed Champlain South Tower with 97 deaths now confirmed but now only 8 believed to still be missing are still searching to recover bodies or parts thereof  believed to be in the rubble a they have removed over 18 million pounds of concrete; the left is going ballistic over DeSantis selling anti Fauci beer koozies with the message “Don’t Fauci My Florida” as Randi Weingarten, the hostage in chief taker of school children, rants that DeSantis is going to ”kill millions”; former  all pro bowler and Stanford alum Richard Sherman has been arrested for domestic violence and is now in jail without bail pending a hearing; Brittany Spears who has been subject to a conservatorship for 13 years won the right to appoint her own lawyer which she has and was soon seen online celebrating doing cartwheels; Blue Minnesota Governor Walsh is going to ban Gay Conversion Therapy by executive order to bypass objections by the Republican controlled Senate opposing the ban; Biden is now calling on the UN to investigate racism in this country to the howls of protest of Reds that if the UN is going to investigate anything it should investigate human rights abuses in China and Cuba; here is a chilling thought given the collapse of the Champlain Tower South—two-thirds of the condominium buildings in Miami are over 30 years old; in a glaring example of the failure of public schools strangled by the teachers unions, in Baltimore before the onset of the pandemic 24% of the public high school students had a 1.0 GPA which number increased to 41% during the pandemic (total tragedy despite the millions of dollars spent with no apparent return); with world economies devasted during the pandemic which more and more came from the Wuhan Lab, China’s growth has slowed to a robust 7.9% growth (how the Chinese can achieve benefits by being a “developing” nation should boggle the mind);  Mayorkas who is a refugee from Cuba in 1960 seems to have no problems with the tidal wave of illegals but he has laid his foot down that refugees coming from Cuba or Haiti by boat will be turned back (wonder if the fact Cuban-Americans tend to vote Red influenced his stance?  https://alaskanpoet.blogspot.com/2021/07/mayorkas-refugee-from-cuba-wants-to-bar.html; as the opposition of CRT continues to grow leave it to the political cartoonist to compare the protests in Cuba to the flag burning CRT advocates here in the U.S.: 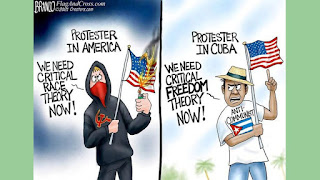 Chicago Gun Violence: Hey Jackass.com is alive and well to collect data to show that through July 12, 2,021, gun violence involving mostly persons of color shooting mostly persons of color in Chicago is alive and well with 2230 persons shot of whom 383 have died.
As always, I hope you enjoy today’s holidays and observances, factoids of interest for this day in history, a recording musical link to “Tossin’ and Turnin’” by Bobby Lewis,  the fact that you are normally a sanguine person and a quote by Lord Acton on the Bastille, secure in the knowledge that if you want to send a gift for any memorable events like Fourth of July, college graduations, birthdays, weddings, or anniversaries, you know that the Alaskanpoet can provide you with a unique customized poem at a great price tailored to the event and the recipient. Please contact me for details on pricing.

1.  Bastille Day—celebrated in France and French speaking nations to commemorate the storming of the Bastille on this day in 1789 which was a major event in the French Revolution that claimed the heads of many aristocrats including the King and Queen of France.
2.  National Mac and Cheese Day—celebrating a dish popularized by Thomas Jefferson after his return from Europe and to top off a mac and cheese meal however enhanced by various meats, seafood or vegetable a dish of mac and cheese ice cream (I kid you not).
3. 1961 Number 1 Song USA—the number 1 song in 1961 on this day was “Tossin’ and Turnin’” by Bobby Lewis on a run of 7 weeks in that position to join 21 other songs that achieved number 1 status and 15 other acts with their first number 1 song on the Billboard Hot 100. Here is a recording  by Bobby Lewis of “Tossin’ and Turnin’”:  https://www.youtube.com/watch?v=3uEPDEJbJu0  Lewis proved that tossin’ and turnin’ was good for longevity as he recently tossed no more on April 28, 2020 after coming down with pneumonia at age 95.
4.  Word of the Day—the word of the day is “sanguine” which means optimistic which is great state of mind to have when facing problems or issues.
5.  Gentle Giant--celebrating the birth on this day in 1932 of Rosey Grier a member of the Rams Fearsome Foursome that brought fear to quarterbacks and running backs and perhaps best remembered as the man who wrested the gun away from Sirhan Sirhan after he had shot Bobby Kennedy at the Ambassador Hotel in Los Angeles celebrating his California Presidential Primary Victory and also although not as well-known as an excellent participant in the art of needlepoint and macramé. Still going strong today at 89.

On this day in:
a. 1874 a massive fire burnt 47 acres in Chicago, destroyed 812 buildings and killed 20 people prompting the insurance companies to demand and obtain reforms in the city council’s procedures for the building code and the permitting process.
b. 1957 Rawya Ateya was seated in the National Assembly of Egypt to become the first female parliamentarian in the Arab World.
c. 1960 Jane Goodall arrived at the Gombe Wildlife Preserve in Tanzania to begin her study of chimpanzees in the wild.

d. 2003 a statue of noted environmentalist and author of Silent Spring was dedicated at Woods Hole, Massachusetts
e.  2016 a radicalized Tunisian, Mohamed Salmene Lahouaiej-Bouhlel, drove his 19 ton truck into crowds of people celebrating Bastille Day along the Promenade des Anglais in Nice, France, killing 86 and injuring 458 before being shot and killed by police.

Reflections on the Bastille: “The Bastille not only overshadowed the capital, but it darkened the hearts of men, for it had been notorious for centuries as the instrument and the emblem of tyranny. The captives behind its bars were few and uninteresting; but the wide world knew the horror of its history, the blighted lives, the ruined families, the three thousand dishonoured graves within the precincts, and the common voice called for its destruction as the sign of deliverance. At the elections both nobles and commons demanded that it should be levelled with the ground.” Lord Acton

© July 14, 2021 Michael P. Ridley aka The Alaskanpoet
Alaskanpoet for Hire, Poems to Admire
Poet Extraordinaire, Beyond Compare
A Unique Gift, All Recipients a Lasting Gift

Posted by Michael P. Ridley aka the Alaskanpoet at 12:33 AM