July 20, 2021 Ridley's Believe It Or Not Space Exploration Day

Tests: We have now conducted 517,831,773 (now at 1,554,887/M) compared to number 2 now France at 1,520,824 we are conducting more tests in number and on a per capital basis for all nations (other than those nations that contain small populations like Bahrain, Denmark, Israel, Malta, Singapore and UAE) other than the U.K. which remains as king of the mountain with respect to tests at 3,437,487/M.
CV Open Gate: Lost in the pronouncements by Biden and his lackeys   that there is no crisis of illegals surging across the border is that fact that COVID-19 is alive and well and spreading in the Northern Triangle and Mexico which been passed by Argentina to move down to 11th  on my list of deaths from the pandemic  at 1814/M with a fatality rate of 10.32% of closed cases and the 3 countries in the Northern Triangle in terms of active cases and deaths per million are as follows even though the data may be suspect as underreported (regardless of number we need no more cases):

US Vaccinations: As of 7/19/21 338.2 million doses at .521 million per day and in California 76,224 per day which means if the rate does not increase it will take us now some 6 months to have 75% of the population vaccinated which many believe is necessary to develop herd immunity (other than Flip Flop Fauci who may believe that 90% is required).  In California 44,195,184 total doses have been given (88.5% of doses received to exceed the U.S. average of 86.8%), but even with the pressure of a recall to be scheduled this fall which hopefully end Newsom’s term, California has finally has not moved from 18th of the 50 states in terms of the percentage of doses administered as a percentage of doses delivered to the states and at 51.8% of its population fully vaccinated compared to the U.S. average of 48.6% has  moved from 18th  to 17th tied with Delaware among the 50 states.  A long way to go still to get herd immunity in terms of getting vaccines received into arms and the percentage of the population fully vaccinated compared to other states which means a great reason to recall this inept and hypocritical governor.
Non  CV News: Bezos’ New Shephard’s fully computer controlled space ship New Shepard successfully followed  Branson’s footsteps into and back from space without hiccup for him and his 3 other passengers; the number of infected Texas scofflaws who fled Austin to a quorum prevent has risen to 6 and an aide to Pelosi and an aide to Biden have tested positive after their interaction with them; fireworks at a Senate Hearing today between Senator Paul and Flip Flop Fauci over our involvement in “gain of function” research on the CV with Paul implying Fauci was lying to Congress; Swalwell  after the exposé of Chinese spy Fang’s involvement in his office has until now been keeping a low profiled but campaign records show he is spending campaign dollars like a drunken sailor on a spree for booze often delivered to him, fine dining restaurants, 5 star hotels and limos (totally devoid of trustworthiness but a real star in bamboozling his constituents); pity the Polish swimmers, 6 of them, that arrived in Tokyo for the Olympics only to find Poland was allowed to send 17 and had to send 6 back; the Southern Border is wide open as record numbers of illegals continue to pore in along with human traffic, crime, drugs and CV infections; Sefronia Thompson is ranting that arresting her for fleeing Texas is like treating her as a slave and returning her to the plantation; Mayor Bowser of the Swamp how ordered “Black Lives Matter” to be painted on a Washington, D.C. street evidently is concerned over BLM’s support of the communist regime in Cuba as she ordered the painting of ”Cuba Libre” in front of the Cuban Embassy to be removed which it was; in what seems like an overkill, Harvey Weinstein, already serving 23 years in New York, has been extradited to California to face trial in 11 counts of sexual abuse; Bill Gates had his low tech solution to solve malaria—a mosquito net to sleep under and leave it to the political cartoonist to pan AOC to suggest to her a solution for the carbon emissions from methane spewing into our atmosphere: 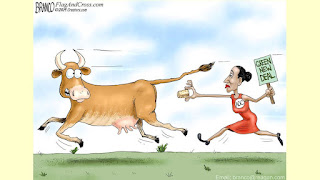 Chicago Gun Violence: Hey Jackass.com is alive and well to collect data to show that through July 19, 2,021, gun violence involving mostly persons of color shooting mostly persons of color in Chicago is alive and well with 2322 persons shot of whom 400 have died.
As always, I hope you enjoy today’s holidays and observances, factoids of interest for this day in history, a video recording musical link to “Rag Doll” by The Four Seasons,  the fact that you have avoided significant saprodontia and a quote by Michael Collins on flights to the Moon, secure in the knowledge that if you want to send a gift for any memorable events like Labor Day, college graduations, birthdays, weddings, or anniversaries, you know that the Alaskanpoet can provide you with a unique customized poem at a great price tailored to the event and the recipient. Please contact me for details on pricing.
1.  International Chess Day—created the International Chess Federation in 1966 at the urging of UNESCO to promote the game of chess among the some 650 million who have played it from time to time worldwide and celebrated on this day as it is the anniversary of the founding of the International Chess Federation in 1924.
2.  Space Exploration Day—created by proclamation by President Ronald Reagan on this day in 1984 to commemorate the progress made in space exploration, manned and unmanned and to promote the further exploration of space (ironic but one wonders if Bezos chose this day for this suborbital ride into space because of the symbolism on the holiday).
3. 1964 Number 1 Song USA—the number 1 song in 1964 on this day was “Rag Doll” by The Four Seasons on a run of 2 weeks in that position to join 22 other songs that achieved number 1 status as 11 acts achieved their first number 1 song on the Billboard Hot 100. Here is a recording  by The Four Seasons of  “Rag Doll: https://www.youtube.com/watch?v=vOCn2F0ZtMY The Four Seasons with Franky Valley with the Beach Boys are the only American bands to enjoy commercial success before, during and after the British Invasion and memorialize in the musical and the movie The Jersey Boys and with Frankie Valli still a member are still performing.
4.  Word of the Day—the word of the day is “saprodontia” which means tooth decay which is a great incentive to practice good dental hygiene and visit your dentist for checkups.
5.  Break a Leg Lose a Life--celebrating the birth on this day in 1933 of noted rock and roll singer Buddy Knox who plied his craft for 35 years and cost him 3 marriages due to travelling on road some 250 days a year earning him the dubious distinction of Billboard Magazine naming him the “most travelling entertainer” in the world. He moved to Port Orchard, Washington be closer to his fiancée in 1997 but later fell and broke his hip only to have a doctor inform him that after being a lifetime smoker, he had developed lung cancer and died from it on February 14, 1999 a few weeks before the start of a farewell tour.

On this day in:
a. 1938 the Department of Justice filed an antitrust action under the Sherman Antitrust Act against the Hollywood movie studio system which ultimately resulted in the industry being broken up.
b. 1969 fulfilling President Kennedy’s earlier goal to land a man on the Moon and return him safely to the Earth before the end of the decade, Buss Aldrin and Neil Armstrong on Apollo 11 landed on the Sea of Tranquility and walked on the Moon.
c. 1977 the fully restored USS Constitution celebrated its 200th birthday by setting sail in Boston Harbor after 116 years of being berthed.

d. 2015 in hope not realized that Cuba would allow some freedoms to exist on the island, the U.S. restored diplomatic relations with Cuba.
e.  2017 O.J. Simpson was released from prison on parole after serving 9 years of a 33 year sentence for armed robbery in Las Vegas (wonder if he will concentrate in his free time on finding the killer of Nicole Brown Simpson and Ronald Goldman?).

Reflections on Apollo 11 from the astronaut who stayed aboard orbiting 30 times while Aldrin and Armstrong explored the Moon: “I think a future flight should include a poet, a priest and a philosopher… we might get a much better idea of what we saw.” Michael Collins who left us on April 28, 2021 due to cancer. This poet certainly agrees with his suggestions.
Please enjoy the poems on events of interest on my twitter account below (if you like them, retweet, and follow me) and follow my blogs. Always good, incisive and entertaining poems on my blogs—click on the links below. Go to www.alaskanpoet.blogspot.com for Ridley’s Believe It Or Not—This Day in History,  poems to inspire, touch, emote, elate and enjoy and poems on breaking news items of importance or go to  Ridley's Believe It Or Not for just This Day in History.

© July 20, 2021 Michael P. Ridley aka The Alaskanpoet
Alaskanpoet for Hire, Poems to Admire
Poet Extraordinaire, Beyond Compare
A Unique Gift, All Recipients a Lasting Gift