Joy Is To You Boston For Against Terror You Have Won

If we lose the War on Terror it will not be on the field of battle but in the fields of our minds, retreating into the bunkers of isolation and withdrawal, too fearful of terror that we are afraid to leave our houses. The bombings last year at the Boston Marathon were a horrific, cowardly act for which the surviving accused will soon stand trial. This year, more spectators watched and more competitors raced as Boston Strong prevailed  against the forces of the night.
In addition to not isolating we should be proud of the fact that the men's winner was an American who fled to this country at the early age of 12 to escape civil war in his native Eritrea and became a naturalized citizen. What is even more like a script out of "It's a Good Life" is that the fact that the names of the 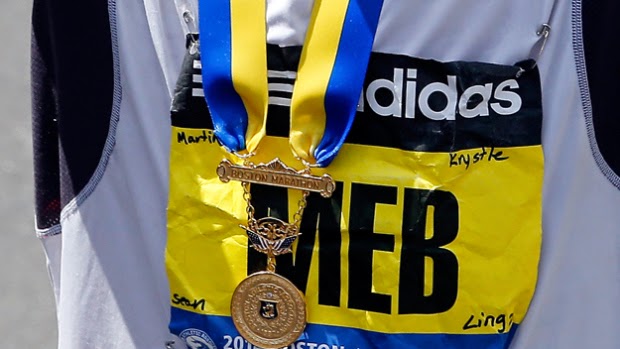 four killed by such cowardly attack were on the Meb Keflezighi's bib. One triumphal, symbolic victory of a city's and nation's resolve does not a final victory make, but it is a great start. Boston Strong is worth at least a one million drones eager to send the latest jihadist to his own personal paradise.
Joy Is To You For You Have Won

After 26 miles a runner staggered into Athens’ streets
Bringing news of a great Persian defeat
“Joy is to you for you have won”
His last words from his heart and body done
Marathons are not for the faint of heart, a very special race
A toil upon the body, no matter the training, no matter how slow the pace
Hyperthermia, dehydration, blisters, chaffing, muscles reduced to stagger and crawl
Suddenly without warning a runner slams into the Wall
But danger and death normally due only to runner versus a Marathon’s deadly effects
Never until last year would a runner need Kevlar for shrapnel to deflect
Two pressure cooker bombs planted near the Boston Marathon finish line
Exploding to kill and maim as part of sick jihadist minds.
One brother caught and killed the other to stand trial
In this nation even the most cowardly and depraved, spouting the most vicious bile
Must be convicted by a jury with the people bearing the burden to prove
Before we can from society or the living a jihadist remove
But the jury of Boston Strong has already weighed in
Stark messages that terror against us will never win
Boston did not lock its doors, pull down its drapes and hide quaking in terror’s icy, uncaring grip
No not the way Boston Strong and this nation works, in a struggle against terror, we will never quit
Pheidippes had no spectators 2500 years ago to watch him race
Over a million lined the streets to cheer the runners in their paces
Runners from all over the world and this nation without hesitation appeared
Including 5,000 who could not finish before the bombs went off and who should have fear
Including one male, an American who fled turmoil in his land to migrate to this nation
Proving despite all our “faults” we are the magnet for a never ending stream of immigration
Who almost witnessed the blasts and due to injury last year could not compete
And who this year of all the men, had lasting stamina and the fastest feet
You may run the Marathon alone, but as a Christian, God may run along your side
Even more so when Martin, Lingzi, Krystle, and Sean were on your bib for the ride
A terrorist attack on this soil is really an attack on all members of the human race
The new pirates, they have no standing to remain on the blackboard of life, they must be erased
Pheidippes had it right “Joy is to you Boston for you have won”
Boston Strong will prevail against the jihadists who our retribution cannot ever outrun
© April 26, 2014 Michael P. Ridley aka the Alaskanpoet

Posted by Michael P. Ridley aka the Alaskanpoet at 5:38 PM No comments: