Posted by Michael P. Ridley aka the Alaskanpoet at 5:12 PM No comments:

Posted by Michael P. Ridley aka the Alaskanpoet at 10:23 PM No comments:

January 28, 2020 Ridley's Believe It Or Not National Data Protection Daydve 120

Posted by Michael P. Ridley aka the Alaskanpoet at 2:39 PM No comments:

January 27, 2020 Ridley's Believe It Or Not Vietnam Peace Day te

Posted by Michael P. Ridley aka the Alaskanpoet at 1:10 PM No comments:

January 26, 2020 Ridley's Believe It Or Not International Customs Day

Posted by Michael P. Ridley aka the Alaskanpoet at 12:46 PM No comments:

January 25, 2020 Ridley's Believe It Or Not Chinese New Yeareive

Ridley’s Believe It Or Not For January 25, 2020 The president’s legal time consigned to the graveyard shift of Saturday morning TV began its defense of the president arguing the facts and the law which they believe is on their side and not like Schiff and Nadler hurling inflammatory accusations against Red Senators who most likely support the president to incur the admonition of Justice Roberts (speculation is rampant that given the weakness of the Blues’ case and the charge that impeachment has been brought to influence the 2020 election, the defense unlike the Blues presentation will be brief and to the point); after yet another year of being trounced in the ratings battle with Fox, there may be a slimmer of recognition that fair and balanced and lack of bias drives ratings as MSNBC Host Ari Melber slammed the House Impeachment Managers for not presenting an overwhelming case for removing the president for obstruction of Congress; Wuhan and the surrounding cities have been shut down while Americans are trying to flee the corona virus infected site in droves as the number of cases continue to climb along with fatalities and markets fearful of the consequences of a pandemic fall (sadly the photos showing more and more Chinese wearing surgical masks may give false comfort to those wearing them but such masks do little if anything to halt the spread of viral diseases); in a new twist on the warning that smoking is hazardous to your health, in a Chicago cigar bar, a woman patron pulled a handgun out of her purse and shot a killed a retired state trooper, wounded another and an off duty trooper and then fatally shot herself; Delta Airlines has been fined $50,000 for discriminating against Muslims for removing three Muslims from two flights to the U.S. because their presence made either passengers or flight attendants nervous and uncomfortable; beleaguered  Boeing had the good news that the weather in Seattle improved enough to allow its new 777X to complete its maiden flight; we all hate traffic delays but a driver in Arizona went to great illegal lengths to avoid them by putting a skeleton in the passenger seat and driving in the HOV lane: 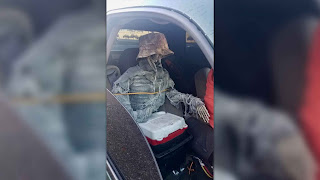 in Chicago, as of January 23, 2020, 123 people have been shot of whom 21 have died; Baltimore with a fraction of Chicago’s population and hoping against all hopes that 2020 will not be a record in terms of deaths has regained the death lead from Chicago and suffered 22 murders by shootings to remain in the dubious distinction of being in the lead (when will Chicago and Baltimore get serious about this carnage or is this the case of true racism as a Blue run city turns a deaf ear and a blind eye to the slaughter of people of color by people of color and when will the left focus on the problem of color on color shootings in Blue run cities which have been more deadly and more numerous than random mass shootings?).
As always, I hope you enjoy today’s holidays and observances, factoids of interest for this day in history, a musical link to Sammy Kaye and His Orchestra,  the fact you do not normally obganiate,  a relevant quote for Chinese New Year in Chinese and translated,  secure in the knowledge that if you want to find a gift for any memorable events like Father’s Day, college graduations, birthdays, weddings, or anniversaries, you know that the Alaskanpoet can provide you with a unique customized poem at a great price tailored to the event and the recipient. You need only contact me for details.
1. Chinese New Year—celebrating the beginning of the Year of the Rat of the Lunar New Year but in this year in Wuhan and surrounding areas not much to celebrate given the outbreak of the coronavirus.
2. Burns Supper—celebrated on this day since 1803 in Scotland and Scottish communities to commemorate the poetic works of Robert Burns born on this day in 1759 complete with readings, bagpipes and those inedible haggis.
3. 1938 Number 1 Number One Song— the number one song in 1938 on this day on a run of 2 weeks in the position was “Rosalie” by Sammy Kaye and His Orchestra. Here is a recording of the song: https://www.youtube.com/watch?v=sCwI66QUass The Harbor Lights for this King of Sway went out due to cancer on June 2, 1987.
4. Word of the Day—today’s word of the day as we move to words starting with “o” is “obganiate” which means to irritate someone by constantly repeating oneself which probably describes the effect of the presentations of Schiff and Nadler to the Senate.
5. Irony Rules—celebrating the birthday on this day in 1971 of Filip Coppens a noted Belgian borne author, host, commentator and student of anomalies who had the misfortune of contracting a rare form of cancer that affects some 200 people a year and died way too early on December 30, 2012 at 41.
On this day in:
a. 1971 Charles Manson and 3 “family” members, Atkins, Kernwinkle and Van Houten were found guilty in the Tate-LaBianca Murders. Manson and Atkins have since died and Kernwinkle and Van Houten are still in prison after numerous parole hearings.
b. 1980 Mother Teresa was honored with India’s highest award a civilian can receive the Bahrat Ratna.
c. 1996 Billy Bailey had the dubious distinction of being the last person in the United States hanged some 16 years after being convicted and sentenced to death which begs the question of the effectiveness of the death penalty in deterring murder.
d. 1998 Pope John Paul II visited Castro’s Cuba, demanding political reform, the release of political prisoners and the end of U.S. attempts to isolate the island nation.
e. 2011 the first wave of protests began against Mubarak in Egypt marked by strikes, marches and violent demonstrations and riots which lasted for 17 days and resulted in the deaths of almost 1000 Egyptians.
Reflections on Chinese New Year: “zhù nǐ lóng mǎ jīng shén祝你龙马精神May you be as energetic as a dragon and horse.”
Please enjoy the poems on events of interest on my twitter account below (if you like them, retweet and follow me) and follow my blogs. Always good, incisive and entertaining poems on my blogs—click on the links below. Go to www.alaskanpoet.blogspot.com for Ridley’s Believe It Or Not—This Day in History, poems to inspire, touch, emote, elate and enjoy and poems on breaking news items of importance or go to  Ridley's Believe It Or Not for just This Day in History.
© January 25, 2020 Michael P. Ridley aka the Alaskanpoet
Alaskanpoet for Hire, Poems to Admire
Poet Extraordinaire Beyond Compare
The Perfect Gift,
All Recipients to Receive a Lasting Lift

Posted by Michael P. Ridley aka the Alaskanpoet at 2:11 PM No comments: