January 8, 2020 Ridley's Believe It Or Not World Poverty Day

Ridley’s Believe It Or Not For January 8, 2020 Early report out on the Iran missile attack at Iraqi bases with U.S. personnel is that no U.S. personnel were killed which is probably why Trump announced that Iran had stood down as he pointed out that the missiles launched were paid with money Obama released to Iran in the nuclear weapons deal (good news to markets which rose and bad news for oil which dropped); Blues rushing to without proper basis invoke the War Powers Act may have to take a breath after Iran’s missile strike and may be looking to voter backlash over their outrage of our killing Soleimani; last night Pelosi tweeted  she’s monitoring situation after slamming Trump’s “provocation” of killing Soleimani and then fled to restaurant opening party in the Swamp); the Supreme Leader must not be on the same page for de-escalation of tensions as the bearded relic intoned that the missile strike was not sufficient; Boeing is nowhere near being out of the woodworks for its 737 Max disasters and was hit again with news of a crash of a Ukrainian Air 737 800 which crashed shortly after takeoff, killing all aboard (continuing to play the rogue nation Iran announced it would not turn over the plane’s black box); the new section of the wall near San Diego appears to be working as crossings are down and the Border Patrol forced to act as rescuers of 3 illegals stranded on top of the wall after smugglers abandoned them (coyotes are not friends in anyway of the illegals they are extorting huge dollars from to enter the U.S.); WAPO is caught with its biased pants down implying that only Republicans consider Soleimani a war criminal while Blues warned of dangerous escalation to war and had the temerity to state that he was Iran’s most revered leader; in Chicago, as of January 6, 2020, 41 people have been shot of whom 7 have died; Baltimore with a fraction of Chicago’s population and hoping against all hopes that 2020 will not be a record in terms of deaths has suffered 5 murders by shootings (when will Chicago and Baltimore get serious about this carnage or is this the case of true racism as a Blue run city turns a deaf ear and a blind eye to the slaughter of people of color by people of color and when will the left focus on the problem of color on color shootings in Blue run cities which have been more deadly and more numerous than random mass shootings?).
As always, I hope you enjoy today’s holidays and observances, factoids of interest for this day in history, a musical link to Ariana Grande,  the fact you have outgrown any pyogenic symptoms of acne, a relevant quote on war of poverty by Walter Bloick,  secure in the knowledge that if you want to find a gift for any memorable events like Father’s Day, college graduations, birthdays, weddings, or anniversaries, you know that the Alaskanpoet can provide you with a unique customized poem at a great price tailored to the event and the recipient. You need only contact me for details.
1. War on Poverty Day—celebrating the declaration by President Johnson on this day in 1964 before Congress to declare a War on Poverty, a war which resulted in the expenditure of trillions of dollars and a war which most observers would agree we lost.
2. Joy Germ Day—commemorating the day Joan White read an article in a San Diego newspaper on this day in 1981 about a couple that would worry of behalf of others for a fee which caused Joan to found Joy Germ Unlimited where people could cause others to worry for them for free if they would send a SASE to the organization (if only someone would come up with the second half of worry—solutions even if only advice, the world would be a better place.
3. 2019 Number 1 Number One Song— the number one song in 2019 on this day on a run of 4 weeks in the position was “Thank U Next” by Ariana Grande Here is a recording of the song: https://www.youtube.com/watch?v=gl1aHhXnN1k
4. Word of the Day—today’s word of the day is “pyogenic” which means pus forming which for acne sufferers is the kiss of death.
5. Mother Love Bone Not Heroin--celebrating the birth on this day in 1966 of noted singer and songwriter Andrew Wood who sadly died before the release of the release of Mother Love Bone’s debut album Apple of a heroin overdose on March 24, 1990.
On this day in:
a. 1963 to the joy of art lovers Leonardo da Vinci’s Mona Lisa was displayed for the first time in the National Gallery for the Arts in Washington, D.C.
b. 2002 President Bush signed into law the No Child Is Left Behind Act which had noble goals but in looking at performance of schools in urban centers may have come up short.
c. 2005 in an oops moment the USS San Francisco, a nuclear submarine, at flank speed ran into an undersea mountain near Guam, killing one seaman but was able to surface and be repaired and return to service until May 11, 2017 but its captain Cmdr. Kevin Mooney was relieved of command and received a reprimand. Awesome photo of damage and testimony to US ship building expertise: 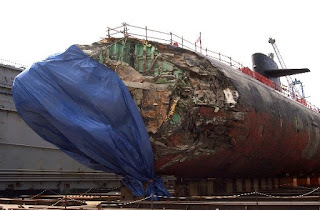 d. 2011 Jared Lee Loughner at Casa Adobes in Tucson shot 13 people including Representative Gabrielle Giffords of whom 6 died; he was subdued by bystanders until police arrived and ultimately entered a plea bargain to escape the death penalty and is mow serving multiple life sentences and will die in prison.
e. 2016 Joaquin Guzman “El Chapo”, a notorious drug cartel leader was recaptured after an escape from a Mexican prison and ultimately extradited to the U.S. to stand trial for various drug charges for which he was found guilty and sentenced to life plus 30 years and is serving his time in a federal Super Max prison where he will ultimately die.
Reflections on the efforts of government to end poverty or otherwise improve the life of disadvantaged minorities: “We must conclude, in the light of this evidence, that governments now enjoy an unmerited reputation for solving the problems of human rights and discrimination. On the contrary, affirmative action, EPFEW, and various anti‑discrimination initiatives have backfired, harming the very minorities they were supposed to protect. Government programs such as minimum wage laws, anti‑usury codes, rent controls, and zoning legislation have had unforeseen and negative consequences for the minority peoples, who have been among the greatest victims of discrimination.”― Walter Block, The Case for Discrimination
Please enjoy the poems on events of interest on my twitter account below (if you like them, retweet and follow me) and follow my blogs. Always good, incisive and entertaining poems on my blogs—click on the links below. Go to www.alaskanpoet.blogspot.com for Ridley’s Believe It Or Not—This Day in History, poems to inspire, touch, emote, elate and enjoy and poems on breaking news items of importance or go to  Ridley's Believe It Or Not for just This Day in History.
© January 8, 2020 Michael P. Ridley aka the Alaskanpoet
Alaskanpoet for Hire, Poems to Admire
Poet Extraordinaire Beyond Compare
The Perfect Gift,
All Recipients to Receive a Lasting Lift

Posted by Michael P. Ridley aka the Alaskanpoet at 11:53 AM