Ridley’s Believe It Or Not For January 13, 2020 LSU beat Clemson for the NCAA National Championship as Trump and the First Lady attended the game to the raucous cheers of those present; first Brexit and now Megxit with the Royal Family meeting to discuss Harry and Meghan’s desire to be self sufficient and reside outside the UK and the Queen issuing a statement that while work remains, a part-time move to Canada while issues are resolved; Blues and Blue Presidential candidates jumped on Trump for killing Soleimani like piranha attacking a steer in a lake ignoring the support of many Iranians for his death but only the sounds of silence when Iranians went to the streets to condemn the mullahs shooting down the Ukrainian jet just departed from Tehran, loaded with Iranians and Canadians (Pelosi breached the sounds of silence on TV by denying that the protesters were protesting the shooting by the government and in so doing looks like the number one PR agent for the mullahs); Trump tweeted this meme which sums up the Blues response to Soleimani, the downing of the Ukrainian jet and the responses of Iranian in the streets of joy as to his death and outrage over the downing: 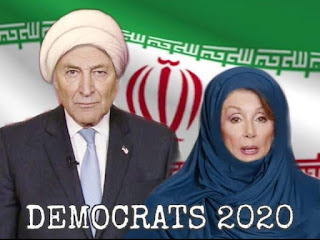 AG Barr has indicated that the shooting at the Pensacola Naval Station by Alshamrani, a Saudi Air Force Officer in training, was an act of terror as 21 Saudi cadets were being sent back to Saudi Arabia (why officers on base are not permitted to carry side arms is a great mystery along with the failure of proper vetting); the DOJ is trying to enlist Apple’s help in accessing Alshamrani’s iPhone to see what additional radicalized jihadists he may have been in contact with before the shooting; Seattle went down to defeat against Green Bay as Pete Carroll was castigated for in the waning minutes of the 4th quarter for not going for a first down on 4th and short; the View is losing one of its saner members as Abby Huntsman is leaving the show to work on her father’s campaign for governor; a Wisconsin judge has ordered the State Election Commission to purge over 200,000 stale voters from registration and found the members of the Commission in contempt for failing to do so (watch for fireworks on this one as Wisconsin is a key battleground state that the Blues are going all out to flip including holding their national convention which may have more than its share of drama as it may be brokered; Spartacus finally was crucified on the cross of no policies, not plans and no solutions, only playing the race card and to the joy of many Booker has dropped out of the Blue race for president; in Chicago, as of January 12, 2020, 60 people have been shot of whom 10 have died; Baltimore with a fraction of Chicago’s population and hoping against all hopes that 2020 will not be a record in terms of deaths has pulled ahead of Chicago and suffered 11 murders by shootings (when will Chicago and Baltimore get serious about this carnage or is this the case of true racism as a Blue run city turns a deaf ear and a blind eye to the slaughter of people of color by people of color and when will the left focus on the problem of color on color shootings in Blue run cities which have been more deadly and more numerous than random mass shootings?).
As always, I hope you enjoy today’s holidays and observances, factoids of interest for this day in history, a musical link to the Mills Brothers,  the fact if traveling you have a pxyus, a relevant quote on public radio by Nellie McCay,  secure in the knowledge that if you want to find a gift for any memorable events like Father’s Day, college graduations, birthdays, weddings, or anniversaries, you know that the Alaskanpoet can provide you with a unique customized poem at a great price tailored to the event and the recipient. You need only contact me for details.
1. Stephen Foster Memorial Day—created by Congress on November 2, 1966 to commemorate the life of Stephen Foster, a 19th Century American songwriter known as “The Father of American Music” with over 200 songs and first celebrated on this day in 1967.
2. National Public Radio Broadcasting Day—celebrating and honoring the contributions made to our culture and society by Public Radio made possible by the Public Broadcasting Act in 1967.
3. 1932 Number 1 Number One Song— the number one song in 1931 on this day on a run of 4 weeks in the position was “Tiger Rag” by the Mills Brothers. Here is a recording of the song: https://www.youtube.com/watch?v=h-d4PlcAGb4. The Mills Brothers were the first African-American music group to have their own national radio show on CBS.
4. Word of the Day—today’s word of the day is “pyxus” which means a small box for jewels or toiletries, a perfect place to keep them when traveling.
5. Pirates and the Blow Plank--celebrating the birth on this day in 1970 of Mario Panati, considered one of the best climber professional cyclists whose career was beset by doping allegations though he never tested positive; sadly in his later racing years he became addicted to cocaine and died on November 4, 2004 from acute cocaine poisoning.
On this day in:
a. 1910 the first public broadcast of the operas Cavalleria rustican and Pagliacci occurred from the Metropolitan Opera House in New York City.
b. 1968 Johnny Cash performed a live concert for inmates at Folsom Prison in California.
c. 1978 alarmed over the possible contamination of blood by the HIV Virus, the FDA required that all blood donations be marked “paid” or “volunteer.”                                       d. 1990 Douglas Wilder became the first elected African-American governor of any state and the first African American governor of the Commonwealth of Virginia.
e. 2018 a false alarm of a pending nuclear strike on Hawaii caused a major panic in the Hawaiian Islands.
Reflections on public radio: ” Public radio is the last oasis of free and independent music. For satellite radio channels, you have to subscribe; commercial stations are as corporate as basic cable.” Nellie McKay, a very progressive British-American singer and songwriter.
Please enjoy the poems on events of interest on my twitter account below (if you like them, retweet and follow me) and follow my blogs. Always good, incisive and entertaining poems on my blogs—click on the links below. Go to www.alaskanpoet.blogspot.com for Ridley’s Believe It Or Not—This Day in History, poems to inspire, touch, emote, elate and enjoy and poems on breaking news items of importance or go to  Ridley's Believe It Or Not for just This Day in History.
© January 13, 2020 Michael P. Ridley aka the Alaskanpoet
Alaskanpoet for Hire, Poems to Admire
Poet Extraordinaire Beyond Compare
The Perfect Gift,
All Recipients to Receive a Lasting Lift

Posted by Michael P. Ridley aka the Alaskanpoet at 11:50 PM