July 9, 2021 Ridley's Believe It Or Not Martyrdom of the Bab

Standing: On a deaths per million population measure on a steady   but slow climb to 1871 the U.S. ranks behind Peru (57994) the new number 1 which has had a quantum leap in deaths previously unmatched which was a change in the classification to give Peru the a new method of reporting to have a fatality rate of 9.36% of total cases now; Hungary the new number 2 has had a huge continuing surge in deaths with the increase now slowing down and improving slightly to  3.89% of its closed cases have died (3114), aping Hungary in terms of increase in deaths Bulgaria 2631),   Brazil (2484) which has been hit with a rapid rise in deaths and cases and passed us and Italy, Belgium (2164), Argentina (2152), (Italy (2116), Poland (1988), and the UK (1881) which had passed us despite leading world in testing and now has new deaths barely increasing),  and slightly better than Mexico (1801), Romania (1790), Chile (1744), Spain (1732),  France (1701), Portugal (1686),  Sweden (1437) that never closed its economy down like we did, Bolivia (1447) and Switzerland (1250).                   Tests: We have now conducted 511,428,044 tests (now at 1,535,903/M) compared to number 2 now France at 1,463,168/M) as we are conducting more tests in number and on a per capital basis for all nations (other than those nations that contain small populations like Bahrain, Denmark, Israel, Malta, Singapore and UAE) other than the U.K. which remains as king of the mountain with respect to tests at 3, 262,032/M.
CV Open Gate: Lost in the pronouncements by Biden and his lackeys   that there is no crisis of illegals surging across the border is that fact that COVID-19 is alive and well and spreading in the Northern Triangle and Mexico which been passed by Argentina to move down to 11th  on my list of deaths from the pandemic  at 1801/M with a fatality rate of 10.33% of closed cases and the 3 countries in the Northern Triangle in terms of active cases and deaths per million are as follows even though the data may be suspect as underreported (regardless of number we need no more cases):
Guatemala:  Active Cases:  28,387 Deaths/M 528
Honduras:    Active Cases: 171,455 Deaths/M 717
El Salvador:  Active cases:     4,538 Deaths/M 373
US Vaccinations: As of 7/9/21 333.0 million doses at .594 million per day down from .599 million per day which means if the rate does not increase it will take us now an increase to some 8 months to have 75% of the population vaccinated which many believe is necessary to develop herd immunity (other than Flip Flop Fauci who now believes that 90% is required).  In California 43,333,368 total doses have been given (87.6% of doses received to exceed the U.S. average of 86.2%), but even with the pressure of a recall to be scheduled this fall which hopefully end Newsom’s term, California has finally  moved up from 20th  to 18th tied with Iowa of the 50 states in terms of the percentage of doses administered as a percentage of doses delivered to the states and at 50.8% of its population fully vaccinated compared to the U.S. average of 47.8% has  not moved from 18th among the 50 states.  A long way to go still to get herd immunity in terms of getting vaccines received into arms and the percentage of the population fully vaccinated compared to other states which means a great reason to recall this inept and hypocritical governor.
Non  CV News: Searchers at the collapsed Champlain South Tower with 79 deaths confirmed and 61 believed to still be missing have ended their search for survivors and are now searching to recover bodies believed to be in the rubble; Lauren Wolfe, another biased leftist journalist at the New York Times who was open and proud of her bias has been fired for her pro-Biden tweets (kudos to her for at least being honest and belated kudos to the NYT to trying to bring some objectivity to its reporting); it may be a hopeful sign that the stench of bias is making the newsroom at CNN unlivable but Scott Jennings of CNN has slammed the NYT’s editorial that the flag on 4th of July has become a divisive symbol; California schools will be open for in person teaching this fall but probably due to 600 pound gorilla in the room, the teachers’ unions, masks will be required, ignoring the CDC guidelines; from the “Cack News Network” to the “Conned News Network” and now to the “Cratering News Network” CNN is shedding viewers like a scalp with a terminal case of dandruff now down to a average of 719,000 viewers during prime time (when will the sponsors bail from this network of over the top biased leftist network?);  5 Palo Alto police officers are suing the city of Palo Alto for a mural portraying the new Black Panther Party and convicted cop killer Assata Shakur; Biden whose plan to increase the capital gains tax will be a disaster for those investing in start-ups that Biden praised signed an executive order targeting 76 business segments which supposedly will increase competition and lower consumer prices; at the 37th annual Bill Gates symposium on climate change, hypocrisy ruled supreme as many of the billionaires arrived in their large carbon footprint private jets to hear speakers rail on the need to reduce carbon emissions; the Biden White House continues to be clueless over the corruption of Hunter who has no artistic talent selling his art to unknown buyers lured by the prospects of access to President Biden lamely telling the American people that Hunter has the right like any American to pursue a career; with Fauci’s credibility and standing in a continuing nose dive, leave it to the political cartoonist to deliver the coup de grace to him: 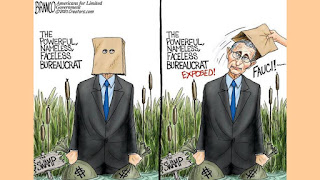 Chicago Gun Violence: Hey Jackass.com is alive and well to collect data to show that through July 8, 2,021, gun violence involving mostly persons of color shooting mostly persons of color in Chicago is alive and well with 2141 persons shot of whom 367 have died.
As always, I hope you enjoy today’s holidays and observances, factoids of interest for this day in history, recording musical links to “Loving You” and “(I Want top Be) Your Teddy Bear.” By Elvis Presley,  the fact that you never competed in track and field as you did not excel in saltativeness and  quotes by Benjamin Franklin and General Edward Braddock on Braddock’s Expedition, secure in the knowledge that if you want to send a gift for any memorable events like Fourth of July, college graduations, birthdays, weddings, or anniversaries, you know that the Alaskanpoet can provide you with a unique customized poem at a great price tailored to the event and the recipient. Please contact me for details on pricing.
1.  World Kebab Day—celebrate that great seasoned Middle Eastern dish on a skewer and easy to celebrate at your favorite restaurant serving kebabs.
2.  Martyrdom of the Bab—celebrating the martyrdom of Báb (Siyyid 'Ali-Muhammad), the herald of the Baha'i Faith, who was executed on this day in 1844 with his body thrown into a moat to be recovered and hidden until 1909 when it was disentombed and placed into a shrine at Mt Carmel in Haifa, Israel.
3. 1957 Number 1 Song USA—the number 1 song in 1957 on this day was “(Let Me Be) Teddy Bear”/ “Lovin’ You” by Elvis Presley on a run of 7 weeks in that position to share with 13 other songs that achieved number 1 status. Here is a recording  by Elvis Presley of “(Let Me Be) Your Teddy Bear” https://www.youtube.com/watch?v=89MihWd6zKk and “Loving’ You” https://www.youtube.com/watch?v=oE8tedRoVlE
4.  Word of the Day—the word of the day is “saltativeness” which means the ability to jump, a skill which humans pale by comparison to many jumpers in the animal kingdom.
5.  Not a Bon Moment--celebrating the birth on this day in 1946 of noted singer and songwriter Ronald Belford Scott better known to his fans and fans of the rock band AC/DC as Bon Scott who after a night of drinking in London passed out and died of acute alcohol poisoning but the band lived on an 5 months after his death released an album Back in Black as a tribute to him that went on to become the 2nd most successful album in history.

On this day in:
a. 1755 the Braddock Expedition of some 1400 soldiers trying to capture Fort Duquesne was attacked by a smaller number of French and their American Indian allies and thoroughly defeated with General Braddock being killed at the Battle on Monongahela which in his taking command and restoring order to enable the surviving British troops to retreat, George Washington gained useful battle experience and solidified his credentials as the soldier needed to command the Continental Army in the Revolutionary War 21 years later.
b. 1893 Dr. Hale Williams became the first African American physician to repair the pericardium that had be injured in a knife fight without the benefit of anesthesia in a successful operation that resulted in the patient living another 20 years.
c. 1896 at the Democratic Party National Convention William Jennings Bryant delivered one of his more famous speeches the” Cross of Gold” speech advocating bimetallism leading to his securing his party’s nomination for presidency which he lost.

Alaskanpoet for Hire, Poems to AdmirePoet Extraordinaire, Beyond Compare
A Unique Gift, All Recipients a Lasting Gift