Standing: On a deaths per million population measure on a steady   but slow climb to 1877 the U.S. ranks behind Peru (5837) the new number 1 which has had a quantum leap in deaths previously unmatched which was a change in the classification to give Peru the a new method of reporting to have a fatality rate of 9.36% of total cases now; Hungary the new number 2 has had a huge continuing surge in deaths with the increase now slowing down and improving slightly to  3.89% of its closed cases have died (3116), aping Hungary in terms of increase in deaths Bulgaria (2637),   Brazil (2535) which has been hit with a rapid rise in deaths and cases and passed us and Italy, Argentina (2234), Belgium (2165), (Italy (2118), Poland (1990), and the UK (1886) which had passed us despite leading world in testing and now has new deaths barely increasing),  and slightly better than Mexico (1814), Romania (1793), Chile (1791), Spain (1734),  France (1704), Portugal (1693),Bolivia (1468),  Sweden (1437) that never closed its economy down like we did, and Switzerland (1250).
Tests: We have now conducted 517,892,496 (now at 1,554,859/M) compared to number 2 now France at 1,515,257 we are conducting more tests in number and on a per capital basis for all nations (other than those nations that contain small populations like Bahrain, Denmark, Israel, Malta, Singapore and UAE) other than the U.K. which remains as king of the mountain with respect to tests at 3,419,282/M.
CV Open Gate: Lost in the pronouncements by Biden and his lackeys   that there is no crisis of illegals surging across the border is that fact that COVID-19 is alive and well and spreading in the Northern Triangle and Mexico which been passed by Argentina to move down to 11th  on my list of deaths from the pandemic  at 1814/M with a fatality rate of 10.32% of closed cases and the 3 countries in the Northern Triangle in terms of active cases and deaths per million are as follows even though the data may be suspect as underreported (regardless of number we need no more cases):

US Vaccinations: As of 7/19/21 338.2 million doses at .521 million per day and in California 76,224 per day which means if the rate does not increase it will take us now some 6 months to have 75% of the population vaccinated which many believe is necessary to develop herd immunity (other than Flip Flop Fauci who may believe that 90% is required).  In California 44,195,184 total doses have been given (88.5% of doses received to exceed the U.S. average of 86.8%), but even with the pressure of a recall to be scheduled this fall which hopefully end Newsom’s term, California has finally has not moved from 18th of the 50 states in terms of the percentage of doses administered as a percentage of doses delivered to the states and at 51.8% of its population fully vaccinated compared to the U.S. average of 48.6% has  moved from 18th  to 17th tied with Delaware among the 50 states.  A long way to go still to get herd immunity in terms of getting vaccines received into arms and the percentage of the population fully vaccinated compared to other states which means a great reason to recall this inept and hypocritical governor.
Non  CV News: Bezos’ New Shephard’s fully computer controlled space ship New Shepard will follow in Branson’s footsteps but will be launched tomorrow  from the ground instead of being dropped from a plane; the search for bodies from  the Champlain South Tower collapse is nearing an end with 97 confirmed deaths, 95 of whom have been identified and 22 million pounds of concrete having been removed; the 50 Texas Blue Don Quixote’s are still in the Swamp organizing a flurry of publicity events which given the fact that 5 of them have tested positive for COVID-19 and are in quarantine are being held virally (empty jail cells await their return to Texas); good news for Harris is that after being exposed to the 5 infected Texas quorum scofflaws she has tested negative; Governor De Santis is warning Floridians that being 1000 miles away from an open border in Texas offers no security from the mass of illegal aliens that are heading to his state; Black Lives Matter which supports Cuba’s communist government is going to have a permanent Black Lives Matter Plaza in Washington, D.C.; David Johnson, a black packaging engineer on contract with Hasbro blown the whistle on CRT trying teach that by 3-6 months babies are on the path toward being racist and parents should not be surprised to find those beliefs in the packaging of Hasbro toys they buy for their kids; after the Hunter Biden corruption cow has already left the barn, WAPO is slamming Hunter Biden’s art quid pro scam with a hysterical scathing OpEd but since the election is over a day late and a dollar short although it might surprise us by being a step in the right direction for the biased rag calling itself a newspaper;  VW is terminating Passat in the U.S. to focus on SUV’s and electric vehicles; while Cubans are protesting in the streets over the tyrannical policies of the communist party there and an increasing number of Blue leftists seem to be supporting them, leave it to the political cartoonist to link the danger from the pandemic to the dangers of socialism: 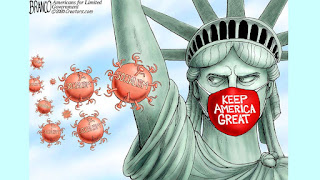 Chicago Gun Violence: Hey Jackass.com is alive and well to collect data to show that through July 14, 2,021, gun violence involving mostly persons of color shooting mostly persons of color in Chicago is alive and well with 2320 persons shot of whom 400 have died.
As always, I hope you enjoy today’s holidays and observances, factoids of interest for this day in history, a video recording musical link to “Easier Said Than Done” by The Essex,  the fact that you have access to sapid cuisine and a quote by Senator Ted Kennedy on Chappaquiddick, secure in the knowledge that if you want to send a gift for any memorable events like Labor Day, college graduations, birthdays, weddings, or anniversaries, you know that the Alaskanpoet can provide you with a unique customized poem at a great price tailored to the event and the recipient. Please contact me for details on pricing.
1.  National Flight Attendant Safety Professionals Day—created a Senate Joint Resolution on July 13, 1990, and first celebrated on July 19, 1990 to honor the professionalism of flight attendants whose professionalism given the mask mandate has been sorely tried by far too many violent passengers.
2.  Global Hug Your Kid Day—created by Michelle Nichols in 2008 a decade after her 8 ½ year old son Mark died of brain cancer and celebrated on the 3rd Monday in July to advance the cause of parents hugging their children not just on this day but on each and every day of the year.
3. 1963 Number 1 Song USA—the number 1 song in 1963 on this day was “Easier Said Than Done” by The Essex on a run of 2 weeks in that position to join 20 other songs that achieved number 1 status and 18 other acts with their first number 1 song on the Billboard Hot 100. Here is a recording  by The Essex of “Easier Said Than Done”): https://www.youtube.com/watch?v=466Y-5dPtBQ The Essex was an African-American R&B band who were all active Marines who had a short career that was impacted by having members deployed on Okinawa and one member being killing in a mugging attempt.
4.  Word of the Day—the word of the day is “sapid” which means having a pleasant agreeable taste which always warms the cockles of a gourmet’s heart.
5.  Two Crash Survivor--celebrating the birth on this day in 1952 of noted guitarist and performer Larkin Allen Collins, Jr. better known to his fans as Allen Collins and a founding member of the band Lynyrd Skynyrd who survived a plane crash that killed 3 Lynyrd Skynyrd band members and severally injured him. Sadly, he was driving his new Ford Thunderbird on January 29, 1986 intoxicated with his girlfriend and was involved in an accident that killed her and paralyzed him from the waist done with damage done to his hands and arms such he would never play the guitar again. He died from pneumonia aggravated by his paralysis on January 23, 1990.

On this day in:
a. 1969 Senator Ted Kennedy crashed his car into a bridge and into a tidal pool at Chappaquiddick, Massachusetts causing the drowning death of his passenger and campaign volunteer Mary Jo Kopechne.
,         b. 1977 the world became an easier place to navigate with the first Global Positioning Signal was transmitted from Navigation Technology Satellite to be received at Rockwell Collins in Cedar Rapids, Iowa.
c. 1980 the Summer Olympics opened in Moscow, boycotted by 66 nations led by the United States due to the invasion by the Soviets of Afghanistan which the Soviets would return the favor by boycotting the 1984 Olympics held in Los Angeles.

d. 1982 David S. Dodge, the President of the American University of Beirut, was kidnapped by Hezbollah extremists and flown back to Tehran where he spent a year in captivity and then released in part due to the efforts of Syria.
e.  1983 the first 3-dimensional representation of the human head was constructed in CT scan was published.

Reflections on the Chappaquiddick from the man driving the car that caused Mary Jo Kopechne’s death: That will remain with me for my whole life. And I've indicated before, you know, that I've accepted responsibility for it. That doesn't change now. [That] won't change in the future. And it's something that I have to just live with." Senator Ted Kennedy
Please enjoy the poems on events of interest on my twitter account below (if you like them, retweet, and follow me) and follow my blogs. Always good, incisive and entertaining poems on my blogs—click on the links below. Go to www.alaskanpoet.blogspot.com for Ridley’s Believe It Or Not—This Day in History,  poems to inspire, touch, emote, elate and enjoy and poems on breaking news items of importance or go to  Ridley's Believe It Or Not for just This Day in History.

© July 19, 2021 Michael P. Ridley aka The Alaskanpoet
Alaskanpoet for Hire, Poems to Admire
Poet Extraordinaire, Beyond Compare
A Unique Gift, All Recipients a Lasting Gift

Posted by Michael P. Ridley aka the Alaskanpoet at 12:11 AM