Standing: On a deaths per million population measure on a steady   but slow climb to 1880 the U.S. ranks behind Peru (5842) the new number 1 which has had a quantum leap in deaths previously unmatched which was a change in the classification to give Peru the a new method of reporting to have a fatality rate of 9.32% of total cases now; Hungary the new number 2 has had a huge continuing surge in deaths with the increase now slowing down and improving slightly to  3.87% of its closed cases have died (3116), aping Hungary in terms of increase in deaths Bulgaria (2639),   Brazil (2554) which has been hit with a rapid rise in deaths and cases and passed us and Italy, Argentina (2259), Belgium (2166), (Italy (2119), Poland (1990), and the UK (1890) which had passed us despite leading world in testing and now has new deaths barely increasing),  and slightly better than Mexico (1820), Chile (1804), Romania (1794),  Spain (1736),  France (1705), Portugal (1697), Bolivia (1482),  Sweden (1438) that never closed its economy down like we did, and Switzerland (1250).
Tests: We have now conducted 520,299,808 (now at 1,562,248/M) compared to number 2 now France at 1,522,417 we are conducting more tests in number and on a per capital basis for all nations (other than those nations that contain small populations like Bahrain, Denmark, Israel, Malta, Singapore and UAE) other than the U.K. which remains as king of the mountain with respect to tests at 3,467,228/M.
CV Open Gate: Lost in the pronouncements by Biden and his lackeys   that there is no crisis of illegals surging across the border is that fact that COVID-19 is alive and well and spreading in the Northern Triangle and Mexico which been passed by Argentina to move down to 11th  on my list of deaths from the pandemic  at 1820/M with a fatality rate of 10.09% of closed cases and the 3 countries in the Northern Triangle in terms of active cases and deaths per million are as follows even though the data may be suspect as underreported (regardless of number we need no more cases):
Guatemala:  Active Cases:  31,240 Deaths/M 544
Honduras:    Active Cases: 179,813 Deaths/M 748
El Salvador:  Active cases:     6,007 Deaths/M 388
US Vaccinations: As of 7/22/21 339.8 million doses at .533 million per day and in California 72,365 per day which means if the rate does not increase it will take us now some 6 months to have 75% of the population of California vaccinated which many believe is necessary to develop herd immunity (other than Flip Flop Fauci who may believe that 90% is required).  In California 44,375,374 total doses have been given (88.4% of doses received to exceed the U.S. average of 86.8%), but even with the pressure of a recall to be scheduled this fall which hopefully end Newsom’s term, California has finally has  moved from 18th to 19th of the 50 states in terms of the percentage of doses administered as a percentage of doses delivered to the states and at 52.0% of its population fully vaccinated compared to the U.S. average of 48.8% has not  moved from 17th tied with Delaware among the 50 states.  A long way to go still to get herd immunity in terms of getting vaccines received into arms and the percentage of the population fully vaccinated compared to other states which means a great reason to recall this inept and hypocritical governor.
Non  CV News: The  Hostage Taker in Chief of the AFT that fought tooth and nail to keep schools closed to in person teaching and is a rabid supporter of CRT is raking in over $560,000 a year some 10 times the average teacher salary whose dues are paying for her salary and contributions to the Blues; Blue Terry McAuliffe in a rough election fight has just taken in $2.2 million in contributions and now wants to repeal Virginia’s right to work laws; as new COVID-19 cases continue to rise due to the Delta variant, the NFL looks like it is in the vanguard of mandating vaccines as the league will not add an additional game to the schedule to make up for lost games due to the virus and players will not be compensated for forfeited games; do not be surprised to see more and more jurisdictions like Los Angeles and St. Louis requiring mask wearing even those who are fully vaccinated; Psaki must be using a different dictionary than the rest of us as she touts the Biden Administration is the most transparent then refuses to answer questions on how many staffers have come down with breakout infections of COCID-19; the Cleveland Indians buckling to the cancel culture warriors have dropped the name Indians and will now be known as the Guardians; Biden must be a great fan of Fear the Walking Dead or his dementia is expanding faster than we thought as he accuses Reds of claiming Blues are “sucking blood out of kids”; the Blue Texas State Representatives are retaining their scofflaw status by refusing to return to Texas (most Texans should be demanding specific sections of the Texas Election Law changes that result in voter suppression: the mission of the search and recover workers at the Champlain South Tower collapse has come to an end with 97 bodies recovered and 1 person still missing; Trump supporter Tom Barrack charged with illegally lobbying on behalf of the U.A.E. has been released from jail on posting $250 million bail; no one listened to Trump when he said in essence once the left starting tearing down Confederate statutes their would be no limit to whom they would want to remove from our history but the political cartoonist gives us a graphic idea where the trend is going: 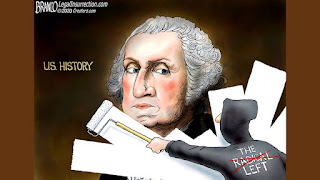 Chicago Gun Violence: Hey Jackass.com is alive and well to collect data to show that through July 22, 2,021, gun violence involving mostly persons of color shooting mostly persons of color in Chicago is alive and well with 2386 persons shot of whom 409 have died.
As always, I hope you enjoy today’s holidays and observances, factoids of interest for this day in history, a video recording musical link to “Windy” by The  Association,  the fact that you do not have a saturnine disposition, and a quote by is  Darryl Buchannan on the Detroit Riot of 1967, secure in the knowledge that if you want to send a gift for any memorable events like Labor Day, college graduations, birthdays, weddings, or anniversaries, you know that the Alaskanpoet can provide you with a unique customized poem at a great price tailored to the event and the recipient. Please contact me for details on pricing.
1.  Sprinkle Day—created on this day in 2017 by Rosie Alyea, a baker, blogger, cookbook author and desert photographer to promote the use of these small multi-colored confectionery decorations for use on cookies, cakes and other desert items.
2.  World Sjögren's Day—created by 16 Sjögren’s foundations to promote awareness of an autoimmune syndrome that that attacks gland producing moisture leading to dry eyes and dry mouth and celebrated on this day as it marks the birthday of Henrik  Sjogren on 1899 who identified the syndrome and has it named after him.
3. 1967 Number 1 Song USA—the number 1 song in 1967 on this day was “Windy” by The Association on a run of 4 weeks in that position to join 18 other songs that achieved number 1 status as 8 acts achieved their first number 1 song on the Billboard Hot 100. Here is a recording  by The Association of   “Windy”:  https://www.youtube.com/watch?v=bPYT9Vyu62A This California band had numerous hits in the 60’s and 70’s as was the lead act at the 1967 Monterey Festival.
4.  Word of the Day—the word of the day is “saturnine” which means of a gloomy or surly disposition.
5.  The Big A May Be Only Waiting--celebrating the birth on this day in 1967 of noted actor, director and producer Philip Hoffman who was nominated for 4 Academy Awards and after using extensively drugs while in college at age 22 upon graduation from college went into rehab and was able to remain sober for 23 years but relapsed in 2013 and tried another rehab program in May of that year that enabled him to conceal his drug use which killed him with a needle in his arm on February 2, 2014 from an accidental mixed drug overdose of heroin, cocaine, benzodiazepines and amphetamine at the age of 45.

On this day in:
a. 1962 the world became a smaller linked planet when Telstar relayed the first live transatlantic television program featuring Walter Cronkite, Chet Huntley and BBC’s leading news commentator Richard Dimbleby.
b. 1967 after Detroit police arrested 81 blacks in a raid of an illegal bar in the African American 12 Street section of Detroit where a party was being held to welcome back 2 black soldiers who had returned from Vietnam, a riot broke out resulting in troops from the 101st and 82nd Airborne Divisions and the Michigan National Guard being sent in to quell the riot and when the riots ended 5 days later, 43 were dead, 1,189 injured, over 7,000 arrested and more than  400 buildings destroyed.
c. 1992 the Vatican ruled that limiting certain rights of homosexuals and unmarried couples was not the equivalent of discrimination based on race or gender.

d. 1999 the Space Shuttle Columbia, carrying the Chandra X-Ray Observatory was successfully launched with Eileen Collins as the first female Shuttle Commander.
e.  2012 in a dodge the solar bullet moment, a massive coronal mass ejection from the Sun occurred which fortunately missed hitting the Earth by 9 days which had it hit would have caused an estimated $2.6 trillion in damages to electrical equipment across the globe.

Reflections on the Detroit Riot of 1967 : “A lot of people say, ‘Why do people burn down their own communities?’ I ask why did patriots throw tea into the Boston Harbor?. In Detroit, we didn’t have bales of tea to throw. All we had was right before us. The rage of the oppression taking place would be manifest in some fashion. The rebellion was how it manifest.” Darryl Buchanan, a resident of Detroit who was 11 years old on July 23, 1967 living near the epicenter of the riot
Please enjoy the poems on events of interest on my twitter account below (if you like them, retweet, and follow me) and follow my blogs. Always good, incisive and entertaining poems on my blogs—click on the links below. Go to www.alaskanpoet.blogspot.com for Ridley’s Believe It Or Not—This Day in History,  poems to inspire, touch, emote, elate and enjoy and poems on breaking news items of importance or go to  Ridley's Believe It Or Not for just This Day in History.
© July 23, 2021 Michael P. Ridley aka The AlaskanpoetAlaskanpoet for Hire, Poems to AdmirePoet Extraordinaire, Beyond CompareA Unique Gift, All Recipients a Lasting Gift

Posted by Michael P. Ridley aka the Alaskanpoet at 12:06 PM