Standing: On a deaths per million population measure on a steady   but slow climb to 1882 the U.S. ranks behind Peru (5855) the new number 1 which has had a quantum leap in deaths previously unmatched which was a change in the classification to give Peru the a new method of reporting to have a fatality rate of 9.32% of total cases now; Hungary the new number 2 has had a huge continuing surge in deaths with the increase now slowing down and improving slightly to  3.87% of its closed cases have died (3116), aping Hungary in terms of increase in deaths Bulgaria (2640),   Brazil (2570) which has been hit with a rapid rise in deaths and cases and passed us and Italy, Columbia newly added to the list (2316);  Argentina (2281), Belgium (2166), (Italy (2120), Poland (1990), and the UK (1892) which had passed us despite leading world in testing and now has new deaths barely increasing),  and slightly better than Mexico (1829), Chile (1821), Romania (1794),  Spain (1737),  France (1706), Portugal (1702, Bolivia (14919),  Sweden (1438) that never closed its economy down like we did, and Switzerland (1250).
Tests: We have now conducted 525,059,020 (now at 1,576,438/M) compared to number 2 now France at 1,550,953 we are conducting more tests in number and on a per capital basis for all nations (other than those nations that contain small populations like Bahrain, Denmark, Israel, Malta, Singapore and UAE) other than the U.K. which remains as king of the mountain with respect to tests at 3,522,153/M.
CV Open Gate: Lost in the pronouncements by Biden and his lackeys   that there is no crisis of illegals surging across the border is that fact that COVID-19 is alive and well and spreading in the Northern Triangle and Mexico which been passed by Argentina to move down to 11th  on my list of deaths from the pandemic  at 4182/M with a fatality rate of 10.09% of closed cases and the 3 countries in the Northern Triangle in terms of active cases and deaths per million are as follows even though the data may be suspect as underreported (regardless of number we need no more cases):

US Vaccinations: As of 7/26/21 342.2 million doses at .591 million per day (8 months to go for 75% of population vaccinated)  and in California 75,621 per day which means if the rate does not increase it will take us now some 5 months to have 75% of the population of California vaccinated which many believe is necessary to develop herd immunity (other than Flip Flop Fauci who may believe that 90% is required).  In California 44,724,529 total doses have been given (88.5% of doses received to exceed the U.S. average of 86.8%), but even with the pressure of a recall to be scheduled this fall which hopefully end Newsom’s term, California has finally has  moved  down from 19th to 20th of the 50 states in terms of the percentage of doses administered as a percentage of doses delivered to the states and at 52.4% of its population fully vaccinated compared to the U.S. average of 49.1% has moved down from 20th to 17th among the 50 states.  A long way to go still to get herd immunity in terms of getting vaccines received into arms and the percentage of the population fully vaccinated compared to other states which means a great reason to recall this inept and hypocritical governor.
Non  CV News: As Blue run cities are jumping on the bandwagon of “Defund the police” their spending millions to their elected mayors and elected officials to their safety with cops increase in what should be a total outrage among black and brown residents that are dying from gunshots like flies; once again we see a testy senile president lashing out a reported who asked a question about VA required vaccinations for personnel that was not in his Iraq subject script (hand it to him he and his staff are doing their best hide his mental failings but they are failing; former Senator Barbara Boxer joined the real world in Oakland as she was assaulted and had her cell phone robbed (if the elite become crime become victims as opposed to black and brown mere mortals the crime was would stop overnight); looks like Ben and Jerry’s anti-Israel boycott may be melting as the authority that grants kosher status for products is reviewing their classification while Cuomo is having state agencies review the question of whether Ben and Jerry’s boycott violates New York’s law banning boycotts of Israel; at a time when shootings and killings are going off the charts AOC is ranting that we must do away with prisons and jails for blacks and browns (wonder how much of her massive campaign war chest she spends on private security guards?); Newsom (who can’t be bothered as he is so busy misgoverning California), Jenner (because she has a prior commitment in Hawaii) and Elder (because he has a fund raising commitment in Bakersfield and does not want Reds attacking each other when they should have Newsom present to attack); some of our social injustice athlete warriors at the Olympics might consider aping aping Hidilyn Diaz as she stood on the platform as the Philippines was awarded its  first ever Gold Medal for her weight lifting performance: 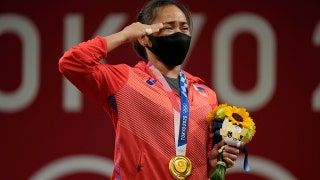 Chicago Gun Violence: Hey Jackass.com is alive and well to collect data to show that through July 25, 2021, gun violence involving mostly persons of color shooting mostly persons of color in Chicago is alive and well with 2461 persons shot of whom 423 have died.
As always, I hope you enjoy today’s holidays and observances, factoids of interest for this day in history, a video recording musical link to “In the Year 2525” by Zager and Evans,  the fact that you find it not necessary to falsely sawder someone, and a quote by Collin Powell on Truman’s desegregation of the U.S. military, secure in the knowledge that if you want to send a gift for any memorable events like Labor Day, college graduations, birthdays, weddings, or anniversaries, you know that the Alaskanpoet can provide you with a unique customized poem at a great price tailored to the event and the recipient. Please contact me for details on pricing.
1.  Holistic Therapy Day—clueless to who created this or when only to imagine by a group displeased the methods and protocols of typical Western Medicine which is so quick to medicate with drugs and has little to listen to or confer with the patient.
2.  One Voice Day—created by the International Students of Metaphysics to celebrate the creation of the 577 word Universal Peace Covenant in 1996 and 97 and signed on October 8, 1997 as a document to “serve as an instrument defining how to think peacefully and live peacefully in a world that is constantly changing” which is read on this day at 6:00 p.m. UT around the world.
3. 1969 Number 1 Song USA—the number 1 song in 1969 on this day was “In the Year 2525” Zager and Evans on a run of 6 weeks in that position to join 16 other songs that achieved number 1 status and join 7 other acts, who achieved their first number 1 song on the Billboard Hot 100. Here is a video recording by Zager and Evans of “In the Year 2525”: https://www.youtube.com/watch?v=izQB2-Kmiic  Zager and Evans  was the prodigal one hit wonder and as of 2019 was the only group to have a number one song in the U.S. and Britain and never have another single that charted.
4.  Word of the Day—the word of the day is “sawder” which means to flatter when used sparingly is a useful trait.
5.  Eyes Shut Not Wide--celebrating the birth on this day in 1928 of noted director Stanley Kubrick who gave us such classics as Paths of Glory, Spartacus, Dr. Strangelove, Clockwork Orange, The Shining;  2001: a Space Odyssey and Eyes Wide Shut completed and subjected to a final screening nine days before he died in his sleep from a heart attack on March 7, 1999.

On this day in:
a. 1948 in a what took us way too long moment President Truman signed Executive Order 9981 desegregating the U.S. military with some urging from A. Phillip Randolph who told him in no uncertain terms that blacks would refuse the draft if the U.S. military was not segregated.
b. 1956 Egypt’s President Nassar angered over the refusal of the World Bank to finance the Aswan Dam, nationalized the Suez Canal which lead to the Tripartite War in October of that year.
c. 1990 the Americans With Disabilities Act was signed into law by President George H.W. Bush.

d. 2005 the Space Shuttle Discovery was successfully launched with fingers probably crossed in first mission after the Columbia in a, to the great relief of NASA, flawless mission.
e.  2016 Solar Impulse 2 carrying only the pilot became the first solar powered aircraft to circumnavigate the Earth after a trip that started on March 9, 2015 but was subject to a lengthy delay in Japan and a grounding in Hawaii to repair the batteries to finally take off from Hawaii in April of 2016 and after added stops to the itinerary landed on this day in 2016 in Abu Dubai to complete the circumnavigation.
Reflections on Harry Truman’s desegregation of the U.S. military: “The military was the only institution in all of America—because of Harry Truman—where a young Black kid, now 21 years old, could dream the dream he dared not think about at age 11. It was the one place where the only thing that counted was courage, where the color of your guts and the color of your blood was more important than the color of your skin.” General Colin Powell former Secretary of State and Chairman of the Joint Chiefs of Staff
Please enjoy the poems on events of interest on my twitter account below (if you like them, retweet, and follow me) and follow my blogs. Always good, incisive and entertaining poems on my blogs—click on the links below. Go to www.alaskanpoet.blogspot.com for Ridley’s Believe It Or Not—This Day in History,  poems to inspire, touch, emote, elate and enjoy and poems on breaking news items of importance or go to  Ridley's Believe It Or Not for just This Day in History.

© July 26, 2021 Michael P. Ridley aka The Alaskanpoet
Alaskanpoet for Hire, Poems to Admire
Poet Extraordinaire, Beyond Compare
A Unique Gift, All Recipients a Lasting Gift