Standing: On a deaths per million population measure on a steady   but slow climb to 1879 the U.S. ranks behind Peru (5839) the new number 1 which has had a quantum leap in deaths previously unmatched which was a change in the classification to give Peru the a new method of reporting to have a fatality rate of 9.36% of total cases now; Hungary the new number 2 has had a huge continuing surge in deaths with the increase now slowing down and improving slightly to  3.89% of its closed cases have died (3116), aping Hungary in terms of increase in deaths Bulgaria (2638),   Brazil (2548) which has been hit with a rapid rise in deaths and cases and passed us and Italy, Argentina (2244), Belgium (2166), (Italy (2119), Poland (1990), and the UK (1888) which had passed us despite leading world in testing and now has new deaths barely increasing),  and slightly better than Mexico (1817), Chile (1794), Romania (1793),  Spain (1735),  France (1705), Portugal (1695), Bolivia (1478),  Sweden (1438) that never closed its economy down like we did, and Switzerland (1250).
Tests: We have now conducted 519,288,507 (now at 1,559,237/M) compared to number 2 now France at 1,522,417 we are conducting more tests in number and on a per capital basis for all nations (other than those nations that contain small populations like Bahrain, Denmark, Israel, Malta, Singapore and UAE) other than the U.K. which remains as king of the mountain with respect to tests at 3,451,273/M.
CV Open Gate: Lost in the pronouncements by Biden and his lackeys   that there is no crisis of illegals surging across the border is that fact that COVID-19 is alive and well and spreading in the Northern Triangle and Mexico which been passed by Argentina to move down to 11th  on my list of deaths from the pandemic  at 1814/M with a fatality rate of 10.32% of closed cases and the 3 countries in the Northern Triangle in terms of active cases and deaths per million are as follows even though the data may be suspect as underreported (regardless of number we need no more cases):

US Vaccinations: As of 7/21/21 339.1 million doses at .519 million per day and in California 74,790 per day which means if the rate does not increase it will take us now some 6 months to have 75% of the population vaccinated which many believe is necessary to develop herd immunity (other than Flip Flop Fauci who may believe that 90% is required).  In California 44,290,270 total doses have been given (88.4% of doses received to exceed the U.S. average of 86.8%), but even with the pressure of a recall to be scheduled this fall which hopefully end Newsom’s term, California has finally has not moved from 18th of the 50 states in terms of the percentage of doses administered as a percentage of doses delivered to the states and at 51.9% of its population fully vaccinated compared to the U.S. average of 48.8% has not  moved from 17th tied with Delaware among the 50 states.  A long way to go still to get herd immunity in terms of getting vaccines received into arms and the percentage of the population fully vaccinated compared to other states which means a great reason to recall this inept and hypocritical governor.
Non  CV News: The pushback by parents and state AG’s against the teaching of CRT in our schools is gaining momentum and securing victories as the Biden DOE has walked back its support of the Abolitionist Network’s roadmap on how to reopen schools which includes guidance on how to remove “whiteness”; Rand Paul is requesting a criminal referral for Fauci’s potential perjury and breaking our laws concerning the banning of gain of function research that he claims was done at the Wuhan Lab and paid for with funds controlled by Fauci but admits given the politization of the DOJ it will be doubtful they will pursue it; the “bipartisan” House committee to investigate ad nauseum just got a lot less nonpartisan after Pelosi in an unprecedented move, refused to allow the Red Minority Leader’s picks Jordan and Banks to be on the committee which prompted McCarthy to indicate the Reds will not participate (Pelosi may be many things but when it comes to dictatorial rule she is consistent); James Craig, the black ex police chief of Detroit, has announced that he is joining 7 other Reds in running to replace Witless Whitmer as the state’s governor; in a typical rush to judgment, the Blues put up for vote a $1 trillion infrastructure bill that is nowhere complete in its drafting which garnered only 49 votes in favor; Newsom’s cronies tried to block Larry Elder’s name from being placed on the recall ballot which prompted a legal challenge by Elder which a court has just ruled in his favor (wonder if Newsom is quaking in his boots as if not he should be); one of the scofflaws from Texas, Donna Harwood, who was one of the 6 who tested positive for CV, is now on the warpath now demanding that all Texans be vaccinated;  in France some demonstrations against have to show a health pass showing vaccination or negative COVID test; as more and more Americans are now attacking Fauci’s performance leave it to the political cartoonist to portray was many believe is fear mongering: 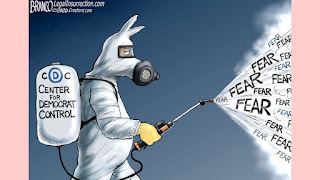 Chicago Gun Violence: Hey Jackass.com is alive and well to collect data to show that through July 20, 2,021, gun violence involving mostly persons of color shooting mostly persons of color in Chicago is alive and well with 2342 persons shot of whom 405 have died.
As always, I hope you enjoy today’s holidays and observances, factoids of interest for this day in history, a video recording musical link to “(I Can’t Get No) Satisfaction” by The  Rolling Stones,  the fact that you have avoided significant saprostomous and a quote by Atlantis Astronaut Doug Harley on the end of the Space Shuttle Program, secure in the knowledge that if you want to send a gift for any memorable events like Labor Day, college graduations, birthdays, weddings, or anniversaries, you know that the Alaskanpoet can provide you with a unique customized poem at a great price tailored to the event and the recipient. Please contact me for details on pricing.
1.  Take Your Poet to Work Day—created by Tweetspeak Poetry and celebrated on the third Wednesday in July to enable someone to take a cut out of a head and torso of a favorite poet and place it in a book of poems or in one’s pockets.
2.  National Hot Dog Day—created by the North American Meat Institute to promote the consumption of hot dogs and celebrated in Washington, D.C. of and annual Hot Dog Day Lunch with government, industry and elected officials which may be truncated due to the pandemic.
3. 1965 Number 1 Song USA—the number 1 song in 1965 on this day was “(I Can’t Get No) Satisfaction” by The Rolling Stones on a run of 4 weeks in that position to join 26 other songs that achieved number 1 status and 13 other acts achieved their first number 1 song on the Billboard Hot 100. Here is a recording  by The Rolling Stones of  “(I Can’t Get No) Satisfaction”: https://www.youtube.com/watch?v=nrIPxlFzDi0 The Rolling Stones who started in 1962 are still performing today and going strong.
4.  Word of the Day—the word of the day is “saprostomous” which means having bad breath which is not conducive to winning friends and influencing people.
5.  Alien Among Us to Make Us Laugh--celebrating the birth on this day in 1951 of noted comedian Robin Williams, best known for his TV role as Mork and a stream successful films like Dead Poets’ Society, Mrs. Doubtfire, Hook and Good Morning Vietnam. Sadly, he suffered from depression and the onset of a form of dementia Lewy body disease and took his own life by hanging on August 11, 2014 at age 63.

On this day in:
a. 1949 the U.S. Senate ratified the North Atlantic Treaty.
b. 1961 Mercury Astronaut Gus Grissom became the 2nd American into space in a suborbital flight aboard the Liberty 7 which had the misfortune of its escape hatch being blown on landing and sinking to the bottom of the ocean.
c. 1970 after 11 years of construction, the Aswan High Dam was completed.

d. 1979 Jay Silverheels, a Mohawk actor best known for his portrayal of Tonto on the Lone Ranger TV series became the first Native American to have a star inserted on the Hollywood Walk of Fame.
e.  2011 the U.S. Shuttle Space Program and its ability to place astronauts into space ended with the final mission of Atlantis.

Reflections on the end of the Space Shuttle Program: “Congratulations, Space X, you got the flag.” Doug Harley Space Shuttle Astronaut aboard the Space Shuttle Atlantis after mounting it in the International Space Station to be recovered by the Space  X Astronauts after they docked on November 16, 2020.
Please enjoy the poems on events of interest on my twitter account below (if you like them, retweet, and follow me) and follow my blogs. Always good, incisive and entertaining poems on my blogs—click on the links below. Go to www.alaskanpoet.blogspot.com for Ridley’s Believe It Or Not—This Day in History,  poems to inspire, touch, emote, elate and enjoy and poems on breaking news items of importance or go to  Ridley's Believe It Or Not for just This Day in History.

© July 21, 2021 Michael P. Ridley aka The Alaskanpoet
Alaskanpoet for Hire, Poems to Admire
Poet Extraordinaire, Beyond Compare
A Unique Gift, All Recipients a Lasting Gift

Posted by Michael P. Ridley aka the Alaskanpoet at 10:36 PM