July 6, 2021 Ridley's Believe It Or Not National Fried Chicken Day

CV Open Gate: Lost in the pronouncements by Biden and his lackeys   that there is no crisis of illegals surging across the border is that fact that COVID-19 is alive and well and spreading in the Northern Triangle and Mexico which been passed by Argentina to move down to 11th  on my list of deaths from the pandemic  at 1796/M with a fatality rate of 10.36% of closed cases and the 3 countries in the Northern Triangle in terms of active cases and deaths per million are as follows even though the data may be suspect as underreported (regardless of number we need no more cases):                                                                 Guatemala:  Active Cases:  24,209 Deaths/M 523                                                                 Honduras:    Active Cases: 169,217 Deaths/M 7108
El Salvador:  Active cases:     4,231 Deaths/M 370
US Vaccinations: As of 7/6/21 331.2 million doses at .866 million per day which means if the rate does not increase it will take us now some 6 months to have 75% of the population vaccinated which many believe is necessary to develop herd immunity (other than Flip Flop Fauci who now believes that 90% is required).  In California 43, 182, 509 total doses have been given (87.7% of doses received to exceed the U.S. average of 86.5%), but even with the pressure of a recall to be scheduled this fall which hopefully end Newsom’s term, California has finally  moved to 19th of the 50 states in terms of the percentage of doses administered as a percentage of doses delivered to the states and at 50.5% of its population fully vaccinated compared to the U.S. average of 47.5% has  moved to 18th among the 50 states.  A long way to go still to get herd immunity in terms of getting vaccines received into arms and the percentage of the population fully vaccinated compared to other states which means a great reason to recall this inept and hypocritical governor.
Non  CV News: With searchers striving to beat Hurricane Elsa bearing down on them, the confirmed death count has risen to 36 from the Champlain South Tower collapse with 109 still missing but only 70 of these confirmed to have been in the building; as the number of vaccine doses continue to drop and some vaccination sites closing to due lack of customers, the Biden Administration is talking about a door-to-door push to get people to get vaccinated (could be a good test run for plans that must be on the shelf to go door to door to try to get people to surrender their firearms; despite the outrage of the left and MSM implying the 4th is for whites only as blacks are not yet free, the 4th was celebrated non virally but it was not a weekend to celebrate freedom from fear of being shot as estimates of over 400 shootings nationwide with some 250 deaths (safe bet will be that close to or more than 95% of the victims and (95% of the shooters will be those of color); Sha’Carri Richardson’s name was not on the roster released by the U.S. Olympic Committee but her 30 day suspension ends before one of the relay races which means she might be able to compete in that event (rules are rules even if the death of her mother prompted the usage but how can marijuana be viewed as performance enhancing in a race?); to be a woke in Loudin County one has to be a fanatic as the Loudin School Board which was hit with an injunction ordering it to reinstate the teacher who refused to address transgenders by anything other than their biological sex due to his religious beliefs is appealing the ruling to the Virginia Supreme Court; Max Lewis 20 year old white University of Chicago student while on a train coming home was hit by a stray bullet which passed through his neck and spinal cord to become 1 of  the 100 people shot in Chicago over the 4th was able to signal his parent by blinking that after learning he would be paralyzed for life from the neck down and require a ventilator that he wanted them to pull the plug which they managed to find the courage and compassion to have it done (sadly the shooter is still on Chicago streets waiting for the next opportunity to shoot and opposing gang member or rival drug dealer); no institution including our military is safe from the woke cancer of CRT as associate PolySci  Professor at Air Force Academy Lynne Garcia is advocating on a WAPO Op-ed platform that CRT be taught to cadets;  as the Blues shielded by the sycophants of the MSM fuel the flames of more division in this country, leave it to the political cartoonist to point out in stark terms their hypocrisy: 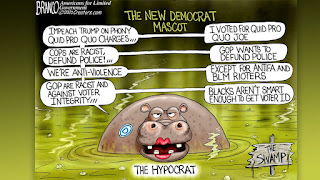 Chicago Gun Violence: Hey Jackass.com is alive and well to collect data to show that through July 6,, 2,021, gun violence involving mostly persons of color shooting mostly persons of color in Chicago is alive and well with 2100 persons shot of whom 357 have died.
As always, I hope you enjoy today’s holidays and observances, factoids of interest for this day in history, a recording musical link to “Little Things Mean a Lot ” by Kitty Kallen,  the fact that you are normally a sadologue  and a quote by L.B.O. Ceallaigh on rabies, secure in the knowledge that if you want to send a gift for any memorable events like Fourth of July, college graduations, birthdays, weddings, or anniversaries, you know that the Alaskanpoet can provide you with a unique customized poem at a great price tailored to the event and the recipient. Please contact me for details on pricing.
1.  National Air Traffic Control System Day—created by the Senate on July 3, 1986 to promote awareness and appreciation for the air traffic control systems that started to be established on this day in 1936 that is essential to keep planes safely in the air while taking off, in flight, or landing and then moving on the taxiways.
2.  National Fried Chicken Day—celebrating that great American way to cook chicken, coated with batter and spices then fried or broasted to seal in the taste and juices and so easy to celebrate either at home or going to the many establishments or chains like Popeyes, Chick-fil-A, Raisin’ Cane or Church’s and enjoying some fried chicken.
3. 1954 Number 1 Song USA—the number 1 song in 1954 on this day was “Little Things Mean a Lot” by Kitty Kallen on a run of 9 weeks in that position to share with 9 other songs that achieved number 1 status. Here is a recording of “Little Things Mean a Lot” by Kitty Kallen: “https://www.youtube.com/watch?v=2C7SzKv2uLU
4.  Word of the Day—the word of the day is “sadologue” which means not a person who is sad but rather one who is easy going or jolly.
5.  Like Father Like Son--celebrating the birth on this day in 1946 of George W. Bush, son of George H.W. Bush and the first father-son presidential team since John Adams and John Quincy Adams who will be best known for leading the country after the disaster of 9/11, the war for nuclear weapons that that did not exist in Iraq and being hit with the financial disaster of 2008. He is now enjoying life as an ex-president probably unlike his father is not jumping out of airplanes and unlike Hunter Biden is painting but is not selling them to anonymous buyers for outrageous price who are buying in expectation of quid pro quo from the White House.
On this day in:
a. 1885 Louis Pasteur successfully tested his rabies vaccine on 9 year old Joseph Meister who had been bitten by a rabid dog. He did not develop rabies and went on as an adult to become the caretaker of the Louis Pasteur Institute but 10 days after the Wehrmacht entered Paris in 1940, he committed suicide at the age of 64 on June 24, 1940.
b. 1944 The Ringling Brothers and Barnum and Bailey Circus was performing its circus in Hartford, Connecticut under a tent which could accommodate 9,000 spectators when the tent coated with fire to waterproof it but made it very flammable caught fire and quickly spread causing pandemonium and panic and when the fire ended some 168 spectators had died and some 500 more had been injured.
c. 1986 Davis Phinney became the first America to win a road stage in the Tour de France.
d. 2006 the Nathu La pass sealed during the Indo-China War was reopened to trade after 44 years.
e.  2013 in a glaring example of why pipelines are safer to transport petroleum, a 73 tanker car train derailed at Lac-Mégantic, Quebec which the resulting fires and explosions destroyed most of the town’s downtown center and killed 47 people.
Reflections on rabies: “The earliest documented appearance of rabies on our planet has been in Mesopotamia around 2000 B.C. ... The symptoms of rabies were diagnosed throughout history, following its inception, as being a   form of undead or cursed type of creature, revenants if you will.”  L.B.Ó Ceallaigh,  Revenants, Retroviruses, and Religion: How Viruses and Disease Created Cultural Mythology and Shaped Religious Perspectives
Please enjoy the poems on events of interest on my twitter account below (if you like them, retweet, and follow me) and follow my blogs. Always good, incisive and entertaining poems on my blogs—click on the links below. Go to  www.alaskanpoet.blogspot.com for Ridley’s Believe It Or Not—This Day in History,   poems to inspire, touch, emote, elate and enjoy and poems on breaking news items of importance or go to  Ridley's Believe It Or Not for just This Day in History.

© July 6, 2021 Michael P. Ridley aka The Alaskanpoet
Alaskanpoet for Hire, Poems to Admire
Poet Extraordinaire, Beyond Compare
A Unique Gift, All Recipients a Lasting Gift

Posted by Michael P. Ridley aka the Alaskanpoet at 1:37 PM