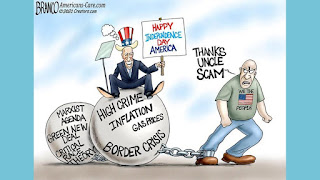 Chicago Gun Violence: Hey Jackass.com is alive and well to collect data to show that through July 2, 2021, gun violence involving mostly persons of color shooting mostly persons of color in Chicago is alive and well with 1996 persons shot of whom 342 have died.
As always, I hope you enjoy today’s holidays and observances, factoids of interest for this day in history, a recording musical link to “Here in My Heart” by Al Marino, the fact that you enjoy a great sack, and a quote by Col. Doug Douds, U.S. Marine Corps (retired), U.S. Army War College  on the Gettysburg Battle site, secure in the knowledge that if you want to send a gift for any memorable events like Fourth of July, college graduations, birthdays, weddings, or anniversaries, you know that the Alaskanpoet can provide you with a unique customized poem at a great price tailored to the event and the recipient. Please contact me for details on pricing.
1.  National Independent Beer Run Day—created by the Brewers Association on June 26, 2019 and first celebrated on this day in 2019 to promote the brewing of craft beers and their consumption and celebrated on the last day before the 4th to stock up on craft beers before one’s barbecue or 4th celebrations.
2. International Day of Cooperatives—celebrated on the first Saturday in July since 1995 to commemorate and honor the efforts of some 1 billion members in cooperatives in a broad spectrum of our economic and cultural activity around the globe.
3. 1952 Number 1 Song USA—the number 1 song in 1952 on this day on a run of 3 weeks non continuous in the position was “Here in My Heart” by Al Martino to join 10 other songs in the number 1 position. Here is a recording of “Here in My Heart” by Al Martino: https://www.youtube.com/watch?v=cMD-k0C1AM8. Martino was known as one of the great Italian American pop singers and also remembered for his role as Johnny Fontaine in The Godfather.
4.  Word of the Day—the word of the day as we leave words starting with “r” and move to those starting with “s” is “sack” which also means a dry white wine or sherry from Spain.
5.  One Two Punch Is Too Deadly--celebrating the birth on this day in 1930 of noted guitarist and studio musician who was probably the most recorded musician of the 20th Century Tommy Tedesco who was a heavy smoker throughout his life and had his career ended by a stroke in 1992 that left him partially paralyzed; years of smoking caught up with him and he died of lung cancer at age 67 on November 10, 1967.
On this day in:
a. 1775 General George Washington took command of the Continental Army such as it was.
b. 1886 the New York Tribune became the first newspaper to start using linotype ending the time consuming practice of setting type by hand.
c. 1938 President Franklin Roosevelt dedicated the Eternal Light Peace Memorial and lit the Eternal Flame at the Gettysburg Battlefield.
d. 1979 President Carter authorized Operation Cyclone, a program of secret military aid to the opponents of the Pro Soviet regime in Afghanistan, which grew significantly under Reagan including Stingers which made it very costly for Soviet helicopters and airplanes to fly missions.
e.  1988 the USS Vincennes in a real oops moment thinking it was being attacked shot down Iranian Flight 655, an Airbus 300, over the Persian Gulf, killing all 290 persons aboard which ultimately resulted in a construed U.S. apology and a payment of $61.8 million to the victims.