July 22, 2021 Ridley's Believe It Or Not National Spoonerism Day

Standing: On a deaths per million population measure on a steady   but slow climb to 1880 the U.S. ranks behind Peru (5842) the new number 1 which has had a quantum leap in deaths previously unmatched which was a change in the classification to give Peru the a new method of reporting to have a fatality rate of 9.32% of total cases now; Hungary the new number 2 has had a huge continuing surge in deaths with the increase now slowing down and improving slightly to  3.87% of its closed cases have died (3116), aping Hungary in terms of increase in deaths Bulgaria (2639),   Brazil (2554) which has been hit with a rapid rise in deaths and cases and passed us and Italy, Argentina (2259), Belgium (2166), (Italy (2119), Poland (1990), and the UK (1890) which had passed us despite leading world in testing and now has new deaths barely increasing),  and slightly better than Mexico (1820), Chile (1804), Romania (1794),  Spain (1736),  France (1705), Portugal (1697), Bolivia (1482),  Sweden (1438) that never closed its economy down like we did, and Switzerland (1250).
Tests: We have now conducted 520,299,808 (now at 1,562,248/M) compared to number 2 now France at 1,522,417 we are conducting more tests in number and on a per capital basis for all nations (other than those nations that contain small populations like Bahrain, Denmark, Israel, Malta, Singapore and UAE) other than the U.K. which remains as king of the mountain with respect to tests at 3,467,228/M.
CV Open Gate: Lost in the pronouncements by Biden ad his lackeys   that there is no crisis of illegals surging across the border is that fact that COVID-19 is alive and well and spreading in the Northern Triangle and Mexico which been passed by Argentina to move down to 11th  on my list of deaths from the pandemic  at 1820/M with a fatality rate of 10.09% of closed cases and the 3 countries in the Northern Triangle in terms of active cases and deaths per million are as follows even though the data may be suspect as underreported (regardless of number we need no more cases):
Guatemala:  Active Cases:  31,240 Deaths/M 544
Honduras:    Active Cases: 179,813 Deaths/M 748
El Salvador:  Active cases:     6,007 Deaths/M 388
US Vaccinations: As of 7/22/21 339.8 million doses at .533 million per day and in California 72,365 per day which means if the rate does not increase it will take us now some 6 months to have 75% of the population of California vaccinated which many believe is necessary to develop herd immunity (other than Flip Flop Fauci who may believe that 90% is required).  In California 44,375,374 total doses have been given (88.4% of doses received to exceed the U.S. average of 86.8%), but even with the pressure of a recall to be scheduled this fall which hopefully end Newsom’s term, California has finally has  moved from 18th to 19th of the 50 states in terms of the percentage of doses administered as a percentage of doses delivered to the states and at 52.0% of its population fully vaccinated compared to the U.S. average of 48.8% has not  moved from 17th tied with Delaware among the 50 states.  A long way to go still to get herd immunity in terms of getting vaccines received into arms and the percentage of the population fully vaccinated compared to other states which means a great reason to recall this inept and hypocritical governor.
Non  CV News: The  Biden line that its promotion of the Abolitionist Teaching Network was a mistake is being challenged by the Reds including former DOE Secretary De Vos who called out the DOE for being riddled with leftists promoting agendas such as Critical Race Theory; Bozo O’Rourke who must have grandiose dreams of returning to the political spotlight has raised $600,000 to allay their discomfort of being away from friends and family holed up in the Swamp; as COVID-19 cases continue to spike, the White House identifies that 3 states, Florida, Missouri and Texas are accounting for 40% of the new cases; outraged over Ben and Jerry’s inane banning the sales of its ice cream in Israel to protest the nation’s “oppressive” oppressive policies against the Palestinians which has prompted Texas to consider banning the sale of the company’s product in Israel; Larry Sanger the co-founder of Wikipedia with Jimmy Wales is outraged over the politization of the site; another misguided Blue from the House has been arrested for blocking access to the Senate to protest the fact that the filibuster has not been repealed; another example of why Newsom is a total joke—while needy unemployed could not receive their unemployment compensation checks. California inmates were collecting on a $1.4 million unemployment benefits scam while behind bars; as the Blues seem to continue to drift to the left, leave it to the political cartoonist to graphically portray what happens to the goose that previously had been laying golden eggs under capitalism when socialism takes over: 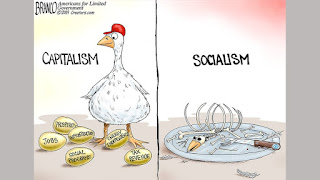 Chicago Gun Violence: Hey Jackass.com is alive and well to collect data to show that through July 21, 2,021, gun violence involving mostly persons of color shooting mostly persons of color in Chicago is alive and well with 2377 persons shot of whom 409 have died.
As always, I hope you enjoy today’s holidays and observances, factoids of interest for this day in history, a video recording musical link to “Hanky Panky” by Tommy James and The Shondells,  the fact that you can borrow without having to provide satisdaction and a quote from Jesse H. Jones with Edward Angly Fifty Billion Dollars: My Thirteen Years with RFC on FDR's failed SCOTUS packing scheme, secure in the knowledge that if you want to send a gift for any memorable events like Labor Day, college graduations, birthdays, weddings, or anniversaries, you know that the Alaskanpoet can provide you with a unique customized poem at a great price tailored to the event and the recipient. Please contact me for details on pricing.
1.  National Refreshment Day—created by Traveler Beer Company in Burlington, Vermont which has since been acquired by the Boston Beer Company, the maker of Sam Adams, and celebrated on the fourth Thursday in July to celebrate the warm days of summer with a cooling liquid refreshment beer or otherwise.
2.  National Spoonerism Day—celebrating the birthday on this day in 1844 of William Archibald Spooner, an Anglican priest and lecturer at Oxford University for 60 years whose intellect often out ran his speech creating memorable slip of the tongues where consonants are often misplaced which became known as “spoonerisms”  like “the Lord is a shoving leopard” or “is the bean bizzy?”.
3. 1966 Number 1 Song USA—the number 1 song in 1966 on this day was “Hanky Panky” by Tommy James and the Shondells on a run of 2 weeks in that position to join 26 other songs that achieved number 1 status and 15 other acts achieved their first number 1 song on the Billboard Hot 100. Here is a video recording  by Tommy James and the Shondells of  “Hanky Panky”: https://www.youtube.com/watch?v=Zb5kgWaGbDQhttps://www.youtube.com/watch?v=Zb5kgWaGbDQ  James started performing as a lead singer when he was twelve and is still active today.
4.  Word of the Day—the word of the day is “satisdation” which means the act of giving security for the obligation of a debtor which is often required for first time borrowers.
5.  Third Is Not Too Shabby--celebrating the birth on this day in 2013 of Kate Middleton’s and Prince William’s first born son Prince George who is now third in line to the English Throne.

On this day in:
a. 1937 the U.S. Senate refused to pass FDR’s bill to expand the number of justices on SCOTUS.
b. 1942 the U.S. began compulsory gasoline rationing for civilians due to demand for gasoline by the military.
c. 1976 Japan made its last payment of $525 million in reparations to the Philippines for its occupation of the country during WWII.

d. 1992 fearing extradition to the United States, Pablo Escobar, the founder of the  Medellín Cartel which in the 80’s was shipping 80-90 tons of cocaine a month into the U.S., escaped from his luxurious prison near Medellin, Columbia and enjoyed being on the run until he was cornered by Columbian security forces and killed in a shootout with them and lost his life on December 2, 1993 on day after his 43rd birthday.
e.  2005 British police hunting for suspects in the July 7 and 21, 2005 London Bombing, mistaking an unarmed Jean Charles de Menezes as one of the bombing suspects, shot and killed him.

Reflections on increasing the size of SCOTUS that the left proposes : “"When it began to appear that he would not get his way, the President sent Thomas G. Corcoran (Tommy the Cork) to ask me if I would sound out some of my friends in the Senate as to whether it would be possible to increase the Court by two members. I had no sympathy with the plan to pack the Court but went up to the Hill and saw some of my friends. They made it clear to me that, had the President in the beginning asked for only two additional members for the Supreme Court, he probably could have got them, but as the score then stood, with everyone embittered, the Senate would not authorize any increase." Jesse H. Jones with Edward Angly Fifty Billion Dollars: My Thirteen Years with RFC. Hopefully, Biden will hear the voices of RBG from the grave opposing the idea of expanding SCOTUS.
Please enjoy the poems on events of interest on my twitter account below (if you like them, retweet, and follow me) and follow my blogs. Always good, incisive and entertaining poems on my blogs—click on the links below. Go to www.alaskanpoet.blogspot.com for Ridley’s Believe It Or Not—This Day in History,  poems to inspire, touch, emote, elate and enjoy and poems on breaking news items of importance or go to  Ridley's Believe It Or Not for just This Day in History.

© July 22, 2021 Michael P. Ridley aka The Alaskanpoet
Alaskanpoet for Hire, Poems to Admire
Poet Extraordinaire, Beyond Compare
A Unique Gift, All Recipients a Lasting Gift

Posted by Michael P. Ridley aka the Alaskanpoet at 12:53 PM