July 11, 2021 Ridley's Believe It Or Not National Free Slurpee Day

CV Open Gate: Lost in the pronouncements by Biden and his lackeys   that there is no crisis of illegals surging across the border is that fact that COVID-19 is alive and well and spreading in the Northern Triangle and Mexico which been passed by Argentina to move down to 11th  on my list of deaths from the pandemic  at 1803/M with a fatality rate of 10.32% of closed cases and the 3 countries in the Northern Triangle in terms of active cases and deaths per million are as follows even though the data may be suspect as underreported (regardless of number we need no more cases):

US Vaccinations: As of 7/11/21 334.1 million doses at .507 million per day down from .514 million per day which means if the rate does not increase it will take us now an increase to some 9 months to have 75% of the population vaccinated which many believe is necessary to develop herd immunity (other than Flip Flop Fauci who now believes that 90% is required).  In California 43,609,176 total doses have been given (87.8% of doses received to exceed the U.S. average of 86.3%), but even with the pressure of a recall to be scheduled this fall which hopefully end Newsom’s term, California has finally instead of moving up has dropped  from  18th  to 19th of the 50 states in terms of the percentage of doses administered as a percentage of doses delivered to the states and at 51.1% of its population fully vaccinated compared to the U.S. average of 48.0% has  moved down  from 18th  to tied with Delaware at 17th among the 50 states.  A long way to go still to get herd immunity in terms of getting vaccines received into arms and the percentage of the population fully vaccinated compared to other states which means a great reason to recall this inept and hypocritical governor.

Non  CV News: Searchers at the collapsed Champlain South Tower with 90 deaths confirmed and 43 believed to still be missing have ended their search for survivors and are now searching to recover bodies believed to be in the rubble; Virgin Galactic’s Unity with Richard Branson one of the 6 aboard after being dropped from its carrier plane rocketed into a brief suborbital flight into space to safely return to its Spaceport in Las Cruces, New Mexico: https://alaskanpoet.blogspot.com/2021/07/a-historic-first-privately-financed.htmlprt the 4th of July weekend in Chicago was record breaking with over 100 shootings and 18 dead but after promising all hands would be on deck prior to the 4th, Mayor Lightweight’s chief of staff and deputy mayor for public safety were out of the office on the 1st and 2nd  (Lightfoot must be absolutely oblivious to the message that sends to Chicagoans fearful of being shot to go with her being totally clueless on how to try to solve the problem); Colin McGregor may be the trash talk king as he went after Duncan Poirier and his wife Jolie but learned trash talk does not win fights as he lost to Poirier suffering a leg injury and enduring the “one finger” salute from Jolie while be treated for the injury; cancel culture is alive and well sadly in Charlottesville, Virginia as the city council infected by woke, voted to remove a statue of Lewis and Clark and Sacagawea which the city quickly did; police in Denver arrested 4 individuals who had booked 2 rooms at the Maven Hotel near Coors Field and who had 16 long guns, 1000 rounds of ammunition and body armor; England meets Italy in the Euro 2020 finals at Wembley Stadium and already the fans seem to be in pre-riot celebration mode; in a dramatic display of a man who is full of energy with synapses all functioning compare to a man without energy hanging on by a slender mental thread, Trump regaled the CPAC conference for an hour and a half to many interrupted cheers; finally BLM seems to be on the receiving end of criticism over its Marxist philosophy and the hypocrisy of only complaining when the black victims have been shot by police as black on black shootings rise off the chart as the political cartoonist graphically points out the hypocrisy: 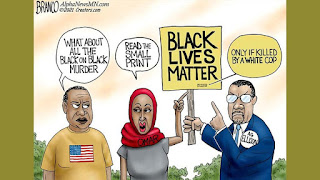 Chicago Gun Violence: Hey Jackass.com is alive and well to collect data to show that through July 10, 2,021, gun violence involving mostly persons of color shooting mostly persons of color in Chicago is alive and well with 2174 persons shot of whom 375 have died.
As always, I hope you enjoy today’s holidays and observances, factoids of interest for this day in history, a recording musical link to “Purple People Eater” by Sheb Wooley,  the fact that you normally live a salutiferous life style and a quote by Gerald Carr on the orbit of SkyLab, secure in the knowledge that if you want to send a gift for any memorable events like Fourth of July, college graduations, birthdays, weddings, or anniversaries, you know that the Alaskanpoet can provide you with a unique customized poem at a great price tailored to the event and the recipient. Please contact me for details on pricing.
1.  Free Slurpee Day—celebrating that great drink offered by 7-11 on this day since 2002.
2.  National Rainier Cherry Day-- celebrating the creation not of a cherry grown on the slopes of Mt. Rainier but the act of Harry Fogle of WSU breeding a Bing cherry with a Van cherry in 1952 to create a cherry that many believe merits premium pricing.
3. 1958 Number 1 Song USA—the number 1 song in 1958 on this day was “Purple People Eater” by Sheb Wooley on a run of 6 weeks in that position. Here is a video recording  by Sheb Wooley of “Purple People Eater”:  https://www.youtube.com/watch?v=X9H_cI_WCnE
4.  Word of the Day—the word of the day is “salutiferous” which means conducive to good health and wellbeing, a life style which too often too many do not adhere.                          5.  Beware of the Gap--celebrating the birth on this day in 1953 of noted boxer and the only one since Primero Canerna to hold a wrestling championship and a boxing championship, Leon Spinks who after only 8 fights defeated Ali to take his title, being only the only boxer to defeat Ali in a championship fight but after retiring from the ring was slurring his words constantly and died from prostate cancer and other cancers on February 5, 2021.

On this day in:
a. 1922 to the joy of fine music lovers everywhere, the Hollywood Bowl opened.
b. 1924 in the Paris Olympics,  Eric Liddell refusing to run in his favored race, the 100 meters, because it was being held on Sunday, won the 400 meter race which was in captured in a great movie Chariots of Fire.
c. 1962 in a test broad cast using Telstar, the first transatlantic transmission was successfully sent.

d. 1976 Martin Luther King, Jr. who was assassinated in 1968, was awarded the Presidential Medal of Freedom by President Carter.
e.  1979 America’s first space station Sky Lab was destroyed as its orbit denigrated into the Earth’s atmosphere.

o               Reflections on the stress of working in Skylab:  “We swallowed a lot of problems for a lot of days because we were reluctant to admit publicly that we were not getting things done right. That's ridiculous, [but] that's human behavior.” Geral Carr on Space.com

© July 11, 2021 Michael P. Ridley aka The Alaskanpoet
Alaskanpoet for Hire, Poems to Admire
Poet Extraordinaire, Beyond Compare
A Unique Gift, All Recipients a Lasting Gift