It seems everywhere you look in education, business, the military and government
WOKE is alive and well and growing to have our symbols and traditions to the trash can sent
At a time when across the nation violent crime is surging unchecked
Especially in cities where the voters are so dumb Blue mayors and city councils they elect
With the only thing between residents and their safety is a concealed carry permit
Or the Thin Blue Line getting thinner each day as more officers quit
Tired of being demeaned and disrespected by the Blue ruleing elite
Crippled by restrictions curbing their ability to arrest felons on the streets
And not as likely to accept putting their lives at the wrong end of gun
When Soros funded D.A.’s are too quick to release on cashless bail or prosecution shun
It was a refreshing show of support that the Saugus Football team flew a Thin Blue Line flag
At least in Blue California in Santa Clarita support for law enforcement does not lag
But persons unknown in name and number complained the flag was divisive
Making them feel “uncomfortable and unwelcome” and on its display were derisive
To the complaints of the very thinned skins
WOKE once again walked off with a win
School board caved as did the coach because the football team had not voted on the flag
Wonder if team and coach had voted to display would they have told the complainers to pound sand after their nags
How many of these thin skinned WOKERs would feel it was a flag divisive enough
If after calling 911 the police responded to attempting assaulters, robbers or murders and quickly arrested and cuffed? 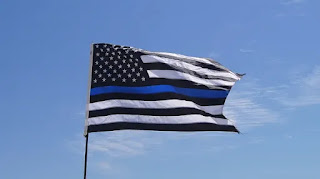 Posted by Michael P. Ridley aka the Alaskanpoet at 3:42 PM