The Annual Congressional Baseball Game is a tradition that dates back to 1909
When members of Congress not their staff set aside partisan views and put their athletic skills on the line
After an exciting slugfest eked out by the Reds in a pandemic delayed game in 2021 13-12 the Reds looked to repeat
Going into the game aping the division in the nation Reds led with 43 wins to Blues 42 defeats
Maybe in an omen of the upcoming midterm Red incoming tide
The Blues were crushed after Red first inning 3-0 start and thoughts of comeback swept aside
!0-0 to end the game in a rout
But the score was not what social media was tweeting about
Not that the game raised $1.7 million for charities in D.C.
Or that heavily armed police were there to easily see
To prevent climate change zealots’ threats to shut the game down
The link to a charity baseball game and climate change known only to these clowns
No the social media focus was on Linda Sanchez drew a walk and waddled to first base
To be replaced by a runner who not burdened by obesity could to the other bases race
Huffing and puffing her obese body back to the dugout
Maybe peeved by being pulled or the rout
Performed the classless act lousy taste so absurd
She observed by the millions watching flipped the Reds the bird
So typical of the death of compromise
And from the Blues civility’s  demise
© 7/29/2022 The Alaskanpoet 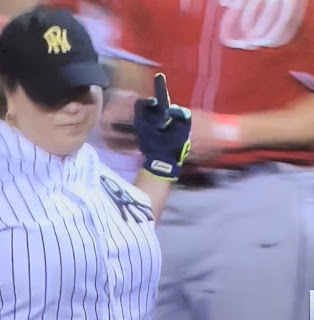 Posted by Michael P. Ridley aka the Alaskanpoet at 7:59 AM