New Jersey City Council Women Amy DeGise is caught on camera hitting cyclist Andrew Black
Sending him flying from his bike to the pavement but driving on and not coming back
Black at first thought he had a green light and right of way
Then admitted he was mistaken but happy to be still alive today
Not sure what the DeGise’s defense will be to a charge of hit and run
But she has dug in her heels and refused to resign which should us stun
At a time when government is pedal to metal to force us to be more green
Clearly the policy not enhanced when a politician hits a cyclist and leaves the accident scene
Since by the grace of God and inches he was not hit full on
And got up to away to the sidewalk limp
Probably with a growing bruise but not becoming a permanent gimp
If the facts merit criminal charges, they should be filed
If not she should still resign as her office she has defiled
© July 31, 2022 The Alaskanpoet 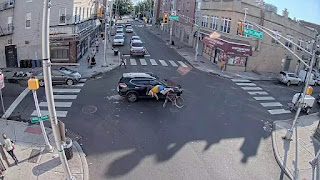 Posted by Michael P. Ridley aka the Alaskanpoet at 1:27 PM