Stalin once said “It’s not who votes that counts, it’s who counts the votes”
Wise saying and applicable when statistics in a debate one must devote
In the debate over the best way to stop an evil man with a gun
Is a good man who is armed with one
Hochul with her gun free zones has proclaimed an end
To the idea of a good man with a gun a thwarted shooting by a felon sends
Must be beside herself being proved to be an idiot to reality deny
As a new study on armed citizens’ stopping crime blasts the reporting of the FBI
The Crime Prevention Research Center identified 360 shootings between 2014-2021
34.4% of those shootings fortunately for the intended victims were thwarted by a citizen with a gun
The FBI statistics for the same period listed only 252 shootings
With only 11 thwarted by an armed citizen by the FBI imputing
Could it be the FBI does not want to armed citizens doing the police’s job promote
Or is it because the FBI with thousands of local jurisdictions the chance of completeness is remote?
The FBI is being maligned due to the politicization by Biden of the DOJ
But in releasing crime data for 1st quarter of 2021, it is missing 9700 jurisdictions including large ones like L.A.
Give the once trusted FBI the benefit of the doubt
Improve data collection and claims of bias not reflexively lash out
As it becomes easier for law abiding citizens to conceal and carry
We should expect a lot more attempted felons being wounded or buried
Hochul in addition to her idiocy of gun free zones that felons attract
Has her head in the sand when she rants that safety in NYC does not lack
Require her to spend time on the NYC subways
She then on safety will have something very different to say 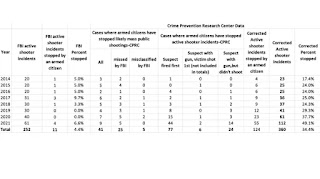 Posted by Michael P. Ridley aka the Alaskanpoet at 1:00 PM