June 9, 2021 Ridley's Believe It Or Not Writers Rights Day

Standing: On a deaths per million population measure on a steady but slowing climb to 1842 the U.S. ranks behind Peru (5603 the new number 1 which has had a quantum leap in deaths previously unmatched which may be a change in the method of reporting; Hungary the new number 2 has had a huge continuing surge in deaths with the increase now slowing down and improving slightly to  3.99% of its closed cases have died (3101), aping Hungary in terms of increase in deaths Bulgaria 2589),   Brazil (2231) which has been hit with a rapid rise in deaths and cases and passed us and Italy, Belgium (2153), (Italy (2100), Poland (1967) and the UK (1874) which had passed us despite leading world in testing and now has new deaths barely increasing),  and slightly better than Argentina (1814), Mexico (1760), Spain (1717),  France (1684), Portugal (1675), Romania (1642),  Chile (1564), Sweden (1428) that never closed its economy down like we did but has recently been experiencing a steady rise in deaths, Bolivia (1276) and Switzerland (1245).
Tests: We have now conducted 490,343,647 tests (now at 1,473,309/M) compared to number 2 now France at 1,338,871/M) as we are conducting more tests in number and on a per capital basis for all nations (other than those nations that contain small populations like Bahrain, Denmark, Israel, Malta, Singapore and UAE) other than the U.K. which remains as king of the mountain with respect to tests at 2,788,480/M.
CV Open Gate: Lost in the pronouncements by Biden and his lackeys   that  there is no crisis of illegals surging across the border is that fact that COVID-19 is alive and well and spreading in the Northern Triangle and Mexico which has moved down to 11th  on my list of deaths from the pandemic having been passed by Argentina at 1758/M and the 3 countries in the Northern Triangle in terms of active cases and deaths per million are as follows even though the data may be suspect as underreported (regardless of number we need no more cases):

US Vaccinations: As of 6/8/21 303.9 million doses finally after decreasing for several days falling to below 1 million to increase to 1.07 million per day which means if the rate does not increase it will take us now down to some 5 months to have 75% of the population vaccinated which many believe is necessary to develop herd immunity. In California 39,633,257 total doses have been given (82.5% of doses received to exceed the U.S. average of 81.7%), but even with the pressure of a recall to be scheduled this fall which hopefully end Newsom’s term, California has not moved   down from  25th   to 26th out of the 50 states in terms of the percentage of doses administered as a percentage of doses delivered to the states and at 45.1% of its population fully vaccinated compared to the U.S. average of 42.3% has moved down  from  18th to 20th among the 50 states.  A long way to go still to get herd immunity in terms of getting vaccines received into arms and the percentage of the population fully vaccinated compared to other states which means a great reason to recall this inept and hypocritical governor.
Non  CV News: Our MIA immigration czar Harris has admitted that she did not raise the issue of a major root cause for surge with Mexico’s President—the country’s refusal to allow families with young children back into the country from the U.S. (was she not briefed on this obvious root cause or forgot?); with all the Fauci flip flops and revealed emails on Wuhan Lab, his attack on the Reds as an attack on science looks like his expiration date as an objective CV scientist has expired; Chuck Todd instead acting like a journalist and probing for the truth apes an ostrich and jumps to Fauci’s defense despite facts coming clearer every day that COVID-19 may have been leaked from the Wuhan Lab; ProPublica the recipient of criminally leaked IRS documents has published an article on how the wealthiest taxpayers pay little or no taxes which supports the left’s idea for a wealth tax (Twitter after Dorsey hypocritically proclaimed that access to social media is a human right while banning conservatives published tweets by ProPublica while banning New York Post articles damning Hunter Biden’s nefarious dealings with Chinese and Ukraine); Biden must know what he is talking about concerning systematic racism as newly discover emails from him show a proclivity of using the N word to describe blacks; in the midst of a massive coverup by WHO and China on the origin of COVID-19, not surprising that the Acting Director of the Budget will not disclosed whether it includes funding for the Wuhan Institute of Virology; the closed border in the minds of the Blues is revealed to be wide open as 180,000 illegals crossed in May (probably much more given the number given the overworked CBP was not able to catch and the handcuffed ICE are not able to deport; latest victim in the war on climate change is GM which because of the chip shortage has had to discontinue the stop/start feature on some of its trucks to save fuel when the truck is stopped to shut off engine and to restart when the driver’s foot on the brake pedal; as CRT moves us further and further of Martin Luther King, Jr.’s goal of having us judge people by the content of our character rather that the color of their skin, leave it to the political cartoonist to portray the damage to his legacy by the embracing of  CRT: 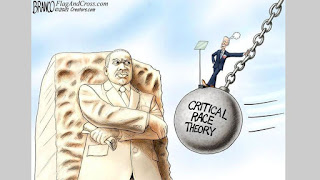 Chicago Gun Violence: Hey Jackass.com is back to show  that   through June  8, 2,021, gun violence involving mostly persons of color shooting mostly persons of color in Chicago is alive and well with 1575 persons shot of whom 271 have died.
As always, I hope you enjoy today’s holidays and observances, factoids of interest for this day in history, a video musical link to “Bad Blood” by Taylor Swift  feat. Kendrick, the fact that you have barely started to rivel in height, and a quote from Madsen Pirie on the impact of the USS George Washington, secure in the knowledge that if you want to send a gift for any memorable events like Father’s Day, college graduations, birthdays, weddings, or anniversaries, you know that the Alaskanpoet can provide you with a unique customized poem at a great price tailored to the event and the recipient. Please contact me for details on pricing.
1.  Writers Rights Day—created some 30 organizations including the Authors Guild  and the National Writers Union to add more copyright protection and higher pay for writers and was first celebrated on this day in 1992.
2. World Antiphospholipid Antibody Syndrome Day—created by the APS Foundation in 2005 to promote this condition that affects 1 in 2,000 Americans as is the leading cause of recurrent miscarriages, thrombosis and strokes and heart attacks affecting the young.
3. 2015 Number 1 Song USA—the number 1 song in 2015 on this day was “Bad Blood” by Taylor Swift feat. Kendrick Lamar on a run of 1 week in that position to join 8 other songs reaching number 1 and 5 other acts that achieved their first number 1 song either as the lead artist or featured guest.  Here is a video recording by Tylor Swift feat. Kendrick Lamar of “Bad Blood”: https://www.youtube.com/watch?v=QcIy9NiNbmo Kendrick Lamar is an American rapper born on June 17, 1987, and has been performing since 2004.
4.  Word of the Day—-the word for today is “rivel” which means to shrink, which is a fate that old age with the never ending help of gravity brings us all.
5.  Golden Rule--celebrating the  birth on this day in 1929 of John Marshal Alexander noted rhythm and blues singer better known to his fans as Johnny Ace who had 8 hit singles between 1952 and 1954 several hit singles in the 50’s but ran afoul of the Golden Rule of Firearms—Never point a gun at yourself assuming it is unloaded as while during sets at his performance at the City Auditorium on December 25, 1954 he after a few drinks was playing with a .32 waving it around. His last words after being warned to be careful were “It’s Okay—It’s unloaded. See” as it went off shooting him In the head and killing him at the age of 25.
On this day in:

a. 1959 the USS George Washington, the world’s first nuclear powered nuclear submarine capable of launching ICBM’s with nuclear warheads from a submerged position was launched.
b. 1967 in the Six Day War, Israel captured the Golan Heights from Syria.
c. 1968 President Johnson following the assassination of Robert Kennedy declared a national day of mourning.
d. 1973 Secretariat won the Triple Crown.
e. 1978 in a what took you so long moment, The Church of the Latter-Day Saints opened up its priesthood to “all worthy men” ending its 148 year old policy of excluding African Americans from becoming priests.
Reflectioons on the launching of the USS Polaris armed with Polaris Nuclear Warhead ICBM’s: “Rather than wait until new submarines designed to carry it could be built, the US Navy basically inserted a new 130ft missile section into the hull of an attack submarine under construction. Admiral Hyman Rickover played a key part in this move, which saw the Polaris system combat ready at least two years before it would otherwise have been. The submarine was renamed the George Washington, and seven months later lest-fired two Polaris missiles while submerged. Despite all their effort and financial sacrifice, the Soviet advantage was nullified because no first strike by them could now eliminate the West’s retaliatory response.” Madsen Pirie, cofounder of the Adam Smith Institute.
Please enjoy the poems on events of interest on my twitter   account below (if you like them, retweet, and follow me) and follow my blogs. Always good, incisive and entertaining poems on my blogs—click on the links below. Go to www.alaskanpoet.blogspot.com for Ridley’s Believe It Or Not—This Day in History,  poems to inspire, touch, emote, elate and enjoy and poems on breaking news items of importance or go to  Ridley's Believe It Or Not for just This Day in History.

© June 9, 2021 Michael P. Ridley aka The Alaskanpoet
Alaskanpoet for Hire, Poems to Admire
Poet Extraordinaire, Beyond Compare
A Unique Gift, All Recipients a Lasting Gift

Posted by Michael P. Ridley aka the Alaskanpoet at 1:10 AM