June 5, 2021Ridley's Believe It Or Not World Environment Day

Guatemala:  Active Cases:  14,768 Deaths/M 454
Honduras:    Active Cases: 148,608 Deaths/M 641
El Salvador:  Active cases:    2,666  Deaths/M 347
US Vaccinations: As of 6/5/21 300.3 million doses falling to below 1 million at 937,669 day in the last week down from 999,434 million even though decreasing still sounds impressive but if the rate does not increase it will take us now back to some 6 months to have 75% of the population vaccinated which many believe is necessary to develop herd immunity. In California 39,130,665 total doses have been given (81.6% of doses received to exceed the U.S. average of 80.8%), but even with the pressure of a recall to be scheduled this fall which hopefully end Newsom’s term, California has  moved from  26th  to 25th out of the 50 states in terms of the percentage of doses administered as a percentage of doses delivered to the states and at 44.2% of its population fully vaccinated compared to the U.S. average of 41.6% has moved up from  20th  to 19th among the 50 states.  A long way to go still to get herd immunity in terms of getting vaccines received into arms and the percentage of the population fully vaccinated compared to other states which means a great reason to recall this Inept and hypocritical governor.
Non  CV News: Twitter has been banned from Nigeria and the social media giant is declaring that access to Twitter is a basic human right while it routinely bans conservative thought and conservative tweeters like Trump (such blatant hypocrisy!); AOC always trying to promote herself has come out and endorsed Progressive candidate Maya Wiley in the primary for mayor; chilling video of a Jacksonville, Florida police heading toward the sounds of gunfire being attacked by a crowd and thrown to the ground but managed to escape without pulling out his gun and shooting; at the North Carolina Republican Convention, Lara Trump announced that due to her young children, she would not be running for a Senate seat and Donald Trump threw his support behind Rep. Ted Budd; Trump is demanding $10 trillion in reparations from China in compensation for the damages caused by COVID-19, 100 % tariffs, and cancellation of debt owed to China; Iran which has been too busy sending arms and funds to terrorists has become a deadbeat on its UN dues of $16 million and has lost its voting rights; the left is obsessed with finding “systematic racism” in every nook and cranny of our lives and even birds are not immune as the Audubon Society accord to WAPO has named 150 birds after slave owners and supporters who fought for the Confederacy; as more and more Americans are troubled by a weak President Biden who seems to be aping Obama and leading from behind on our foreign policy, leave in to the political cartoonist to graphically portray what leading from behind means: 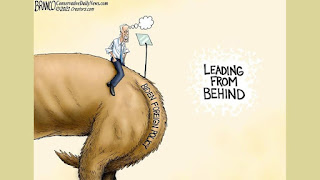 Chicago Gun Violence: Hey Jackass.com is back to show  that   through June 4, 2021, gun violence involving mostly persons of color shooting mostly persons of color in Chicago is alive and well with 1508 persons shot of whom 265 have died.
As always, I hope you enjoy today’s holidays and observances, factoids of interest for this day in history, a video musical link to “Rolling in the Deep” by Adele, the fact that you have dodged the a rigescent bullet, and a quote from Indira Gandhi on the eve of her assassination, secure in the knowledge that if you want to send a gift for any memorable events like Father’s Day, college graduations, birthdays, weddings, or anniversaries, you know that the Alaskanpoet can provide you with a unique customized poem at a great price tailored to the event and the recipient. Please contact me for details on pricing.
1. World Environment Day—created by the UN in 1972 and first celebrated on this day in 1974 at Spokane. Washington, the site of Expo ’74 and created to be a platform for creating awareness of various environmental issues facing the planet and the living creatures that inhabit it that change each and every year.
2. Apple II Day—celebrating the release by Apple Corporation of the Apple  II  Computer.
3. 2011 Number 1 Song USA—the number 1 song in 2011 on this day was “Rolling in the Deep” by Adele on a run of 7 weeks in that position to join 13 other songs reaching number 1 and 8 other acts that achieved their first number 1 song either as the lead artist or featured guest.  Here is a video recording by Adele of “Rolling in the Deep”: https://www.youtube.com/watch?v=rYEDA3JcQqw  Adele was born in England on May 5, 1988 and has been performing as a singer/songwriter since 2006 and has managed to shed some 45 kilos of weight.
4.  Word of the Day—the word for today is “rigescent” which means becoming numb or stiff which sadly is a condition that sometimes comes with age.
5.  Hopping Into Fame--celebrating the birth on this day in 1895 of noted actor William Boyd better known to his fans as Hopalong  Cassidy, the antithesis of the hard drinking, smoking cowboys portrayed in the literature and movies of the Old West; true to this stage name, Boyd hopped from one marriage to another 5 times and left his saddle for the last time on September 12, 1972 at the age of 79 from complications from Parkinson’s disease and congestive heart failure.
On this day in
a. 1947 at a speech at Harvard University Secretary of State George     Marshall unveiled a plan to bring economic aid to war devastated Europe.
b. 1981 the Weekly Morbitity and Mortality Report of the CDC announced     the deaths of  5 people in Los Angeles from a rare form of pneumonia that affected people with weakened immune systems and was the first notice of the presence of AIDS.
c. 1984 kicking off Operation Blue Star, India’s Prime Minister Indira Gandhi  gave orders to Indian Army surrounding the  Harmandir Sahib (the “Golden Temple” to attack it to find and arrest a Sikh rebel and when the dust had cleared on the 10th after heavy fighting , over a 1,000 troops and civilians had been killed and the anger created in Sikhs led to Indira Gandhi’s assassination by her Sikh bodyguards on October 31, 1984.
d. 1989 ank Man, an unidentified Chinese man, stood in front of a  Chinese tank advancing on Chinese protestors in Tiananmen Square holding up its advance for some 30 minutes before it was able to move around him and advance to clear the Square. The identity of the Tank Man whose stand was caught on video has never been revealed but it is a sure bet that he was arrested and executed.
e. 2001 Tropical Storm Allison made landfall in Texas and lingered until June 20, 2001, in Texas and the Southeast as it moved slowly North until dissipating in Pennsylvania but not until it had caused 41 deaths and $9 billion in damages.
Reflections on the premonition of assassination by Indira Gandhi following her ordering Indian Army forces to enter the Golden Temple: “I am here today, I may not be here tomorrow. But the responsibility to look after national interest is on the shoulder of every citizen of India. I have often mentioned this earlier. Nobody knows how many attempts have been made to shoot me, lathis have been used to beat me. In Bhubaneswar itself, a brickbat hit me. They have attacked me in every possible manner. I do not care whether I live or die. I have lived a long life and I am proud that I spend the whole of my life in the service of my people. I am only proud of this and nothing else. I shall continue to serve until my last breath and when I die, I can say, that every drop of my blood will invigorate India and strengthen it.” Indira Gandhi in her last speech before her assassination on the next day.
Please enjoy the poems on events of interest on my twitter   account below (if you like them, retweet, and follow me) and follow my blogs. Always good, incisive and entertaining poems on my blogs—click on the links below. Go to www.alaskanpoet.blogspot.com for Ridley’s Believe It Or Not—This Day in History,  poems to inspire, touch, emote, elate and enjoy and poems on breaking news items of importance or go to  Ridley's Believe It Or Not for just This Day in History.

© June 5, 2021 Michael P. Ridley aka The Alaskanpoet
Alaskanpoet for Hire, Poems to Admire
Poet Extraordinaire, Beyond Compare
A Unique Gift, All Recipients a Lasting Gift