jJune 29, 2021 Ridley's Believe It Or Not World Scleroderma Day

Standing: On a deaths per million population measure on a steady   but slow climb to 1861 the U.S. ranks behind Peru (5749) the new number 1 which has had a quantum leap in deaths previously unmatched which was a change in the classification to give Peru the a new method of reporting to have a fatality rate of 9.38% of total cases now; Hungary the new number 2 has had a huge continuing surge in deaths with the increase now slowing down and improving slightly to  3.90% of its closed cases have died (3112), aping Hungary in terms of increase in deaths Bulgaria (2616),   Brazil (2402) which has been hit with a rapid rise in deaths and cases and passed us and Italy, Belgium (2162), Italy (2113), Argentina (2042), Poland (1984), and the UK (1878) which had passed us despite leading world in testing and now has new deaths barely increasing),  and slightly better than Mexico (1786), Romania (1758), Spain (1728),  France (1698), Chile (1685) Portugal (1681),  Sweden (1436) that never closed its economy down like we did, Bolivia (1406) and Switzerland (1249).
Tests: As more and more of us are being vaccinated we are testing fewer each day and we have now conducted 504,883,782 tests (now at 1,516,515/M) compared to number 2 now France at 1,423,021/M) as we are conducting more tests in number and on a per capital basis for all nations (other than those nations that contain small populations like Bahrain, Denmark, Israel, Malta, Singapore and UAE) other than the U.K. which remains as king of the mountain with respect to tests at 3,095,413/M.
CV Open Gate: Lost in the pronouncements by Biden and his lackeys   that there is no crisis of illegals surging across the border is that fact that COVID-19 is alive and well and spreading in the Northern Triangle and Mexico which been passed by Argentina to move down to 11th  on my list of deaths from the pandemic  at 1786/M with a fatality rate of 10.45% of closed cases and the 3 countries in the Northern Triangle in terms of active cases and deaths per million are as follows even though the data may be suspect as underreported (regardless of number we need no more cases):
Guatemala:  Active Cases:  19,863 Deaths/M  498
Honduras:    Active Cases: 161,100  Deaths/M  688
El Salvador:  Active Cases:    3,818  Deaths/M  364
US Vaccinations: As of 6/29/21 325.2 million doses with after 4 days of decreasing doses finally increasing for 3 days from .875 million per day yesterday to .896 million per day which means if the rate does not increase it will take now take us some 6 months to miss Biden’s goal of having 75% of the population vaccinated which many believe is necessary to develop herd immunity (other than Flip Flop Fauci who is suggesting 90%). In California 42,513,548 total doses have been given (86.5% of doses received to exceed the U.S. average of 85.2%), but even with the pressure of a recall to be scheduled this fall which hopefully end Newsom’s term, California moved from  19th  to 21st   of the 50 states in terms of the percentage of doses administered as a percentage of doses delivered to the states and at 49.7% of its population fully vaccinated compared to the U.S. average of 46.4% has  moved up from 20th to 18th among the 50 states (maybe Newsom’s vaccine lottery deserves more credit).  A long way to go still to get herd immunity in terms of getting vaccines received into arms and the percentage of the population fully vaccinated compared to other states which means a great reason to recall this inept and hypocritical governor.
Non  CV News: In Miami as frantic searchers are still trying to comb the rubble  for survivors, the confirmed death count still stands at 11 and confirmed missing at 150 as photos have been released by a pool contractor 36 hours prior to the collapse which may show signs of structural damage and a collapse waiting to happen: 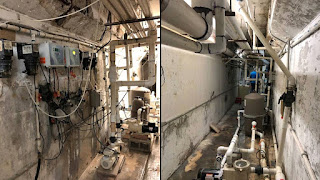 (when the search for survivors ends as it soon will as over 5 days have elapsed the search for what caused the collapsed and who might be culpable of negligence will begin); in a typical show of presidential sympathy Biden and the First Lady will be visiting the collapse site; Blues in a typical modus operandi had their Energy Secretary on TV implying that the cause of the collapse of the South Tower was climate change; South Dakota is about as far from our Southern border you can get other than Hawaii and Alaska, but Governor Kristi Noem has answered the call for help and is sending 50 National Guard personnel to the border and to the delight of her state’s residents will hold 4th of July celebrations as the Biden Administration nixed fireworks at Mt. Rushmore; Kate Middleton, the Duchess of Cambridge who is the epitome of deportment and grace for a spouse of a member of the Royal Family in contrast to what Meghan Markle is not, has been given a new task, that of being a sponsor of a new warship HMS Glasgow; in a follow the money moment Gwen Berry concentrating on supporting those who have died due to “systematic racism” and whose antics at the hammer throw medals ceremony at the U.S. Olympics is being sponsored with cash help for Color of Change, a leftist group front and center in the Defund the Police movement; the most over used word and most inappropriately used word from “master bedroom” to “black holes” is racist (like the boy who falsely cried “wolf!” too many times soon the word will cease to have any meaning a real racist acts we all should condemn will go unnoticed); CNN and MSNBC who personify one trick ponies in journalism are being clobbered in the ratings as viewers are clicking them off by the thousands as in media credibility rankings it appears the U.S. has fallen to 46th in the world; former police captain Eric Adams’ lead in the Blue New York primary has shrunk to 2.8% over Kathryn Garcia, both of whom have campaigned on more police (good news on the sanity thermometer is that AOC endorsed de Blasio former staffer Maya Wiley has be eliminated); Jamie Spear, Brittany Spear’s father who is her conservator and who she wants removed as such is living in a RV near a warehouse housing some of Spear’s memorabilia; as China continues to get a free MSM pass on its human rights abuses leave it the political cartoonist to call a spade a spade and slamming NBC who will be televising the Tokyo Games: 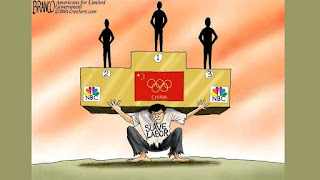 Chicago Gun Violence: Hey Jackass.com is alive and well to collect data to show that through June 28, 2,021, gun violence involving mostly persons of color shooting mostly persons of color in Chicago is alive and well with 1918 persons shot of whom 326 have died.
As always, I hope you enjoy today’s holidays and observances, factoids of interest for this day in history, a recording musical link to “Nature Boy” by Nat King Cole, the fact that you can hire someone to perform runcation and a quote by Dan McNichols on the Interstate Highway System  secure in the knowledge that if you want to send a gift for any memorable events like Fourth of July, college graduations, birthdays, weddings, or anniversaries, you know that the Alaskanpoet can provide you with a unique customized poem at a great price tailored to the event and the recipient. Please contact me for details on pricing.
1.  World Scleroderma Day—created by the World Scleroderma Congress       in February 2010 to promote awareness of scleroderma which is an autoimmune disease which involves the hardening of the skin and connective tissues and to promote research into treatment and finding its cause.
2. National Camera Day—celebrating a visually recording device that     has been with us since 1836 and has evolved to the digital camera and the ubiquitous smart phone camera able to record video and photos.
3. 1948 Number 1 Song USA—the number 1 song in 1948 on this day on a run of 7 weeks in the position was “Nature Boy” by Nat King Cole to join 80 other songs in the number 1 position. Here is a recording of “Nature Boy” by Nat King Cole: https://www.youtube.com/watch?v=Iq0XJCJ1Srw This incredibly talented and popular singer but heavy smoker was diagnosed with lung cancer in in December of 1964, had his left lung removed on January 25, 1965 and after leaving the hospital with his wife to take a short drive along the coast on Valentine’s Day, in the morning of February 15, 1965 at the way too early age with so many songs left to sing he died at age 45.                              4.  Word of the Day—the word of the day is “runcation” which means the act of weeding which explains why gardening is for many people not satisfying.
5.  Failure to Assassinate Failure to Commit Suicide--celebrating the birth on this day     in 1880 of Ludwig Beck who became Chief of Staff of the Wehrmacht from 1935-1938 but soon departed from his support of Adolph Hitler and was replaced and placed on the inactive list where he started planning  assassination attempts of Hitler which failed with the July 20 coming the closest and only thwarted by an attendee at the Fuhrer’s Bunker during a conference moving von Stauffenberg’s  bomb laden briefcase being moved that resulted in Hitler being injured not killed and Beck arrested. Fearing what interrogation by the Gestapo would entail, Beck shot himself in the head but failed, causing one of his guards to administer the coup de grace.

On this day in:
a. 1927 to the joy of future air travelers to the Hawaiian Islands, the U.S. Army’s Fokker Trimotor named The Bird of Paradise made the first transpacific flight from the United States to the Hawaiian Islands.
b. 1956 President Eisenhower sign our first large infrastructure bill the Interstate Highway Act of 1956 with $24.8 billion to be allocated ($244.4 in today’s dollars).
c. 1975 Steve Wozniak tested his prototype of the Apple 1 computer.
d. 2007 Apple released the first smart phone the iPhone.
e.  2014 ISIS declared its caliphate in Syria and Iraq which Trump would soon destroy after he took office in 2017.

© June 29, 2021 Michael P. Ridley aka The Alaskanpoet
Alaskanpoet for Hire, Poems to Admire
Poet Extraordinaire, Beyond Compare
A Unique Gift, All Recipients a Lasting Gift

Posted by Michael P. Ridley aka the Alaskanpoet at 9:28 PM