June 25, 2021 Ridley's Believe It Or Not National Catfish Day

Standing: On a deaths per million population measure on a steady   but slow climb to 1860 the U.S. ranks behind Peru (5728) the new number 1 which has had a quantum leap in deaths previously unmatched which was a change in the classification to give Peru the a new method of reporting to have a fatality rate of 9.38% of total cases now; Hungary the new number 2 has had a huge continuing surge in deaths with the increase now slowing down and improving slightly to  3.91% of its closed cases have died (3111), aping Hungary in terms of increase in deaths Bulgaria (2614),   Brazil (2389 which has been hit with a rapid rise in deaths and cases and passed us and Italy, Belgium (2162), Italy (2110), Argentina (2017), Poland (1983), and the UK (1877) which had passed us despite leading world in testing and now has new deaths barely increasing),  and slightly better than Mexico (1784), Spain (1727), Romania (1722), France (1696),  Portugal (1680),  Chile (1661), Sweden (1435) that never closed its economy down like we did, Bolivia (1395) and Switzerland (1248).                  Tests: We have now conducted 503,006,392 tests (now at 1,510,948/M) compared to number 2 now France at 1,406,463/M) as we are conducting more tests in number and on a per capital basis for all nations (other than those nations that contain small populations like Bahrain, Denmark, Israel, Malta, Singapore and UAE) other than the U.K. which remains as king of the mountain with respect to tests at 3,035,991/M.
CV Open Gate: Lost in the pronouncements by Biden and his lackeys   that there is no crisis of illegals surging across the border is that fact that COVID-19 is alive and well and spreading in the Northern Triangle and Mexico which been passed by Argentina to move down to 11th  on my list of deaths from the pandemic  at 1784/M with a fatality rate of 10.48% of closed cases and the 3 countries in the Northern Triangle in terms of active cases and deaths per million are as follows even though the data may be suspect as underreported (regardless of number we need no more cases):
Guatemala:  Active Cases:  20,177  Deaths/M  491
Honduras:    Active Cases: 159,194  Deaths/M  686
El Salvador:  Active Cases:    3,525  Deaths/M  361
US Vaccinations: As of 6/25/21 321.2 million doses with 3 days of decreasing doses to .763 million per day which means if the rate does not increase it will take now take us  some 6 months to miss Biden’s goal of having 75% of the population vaccinated by the 4th of July which many believe is necessary to develop herd immunity. In California 41,985,070 total doses have been given (85.9% of doses received to exceed the U.S. average of 84.5%), but even with the pressure of a recall to be scheduled this fall which hopefully end Newsom’s term, California has finally  moved up 22nd tied with Ohio to 21st  of the 50 states in terms of the percentage of doses administered as a percentage of doses delivered to the states and at 48.8% of its population fully vaccinated compared to the U.S. average of 45.7% has  moved up from 17th to 16th  among the 50 states.  A long way to go still to get herd immunity in terms of getting vaccines received into arms and the percentage of the population fully vaccinated compared to other states which means a great reason to recall this inept and hypocritical governor.
Non  CV News: In Minneapolis, the judge threw the book at Chauvin ignoring sentencing guidelines of 12 ½ years and sentencing him to 22 ½ years not the 30 that the Floyd family wanted but when coupled with a likely guilty verdict trial in the fed’s case for depriving Floyd of his civil rights will most likely mean Chauvin will die in prison if his conviction is not reversed; the death toll in the Champlain Tower Condominium collapse has risen to 4 and the missing number has risen to 159 as searchers putting their own lives at risk continue to search for survivors (how could anyone survive the collapse of 12 stories on top of them as this graphic photo shows?): 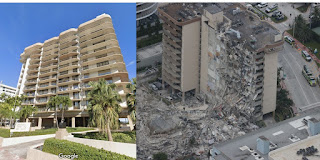 Where’s Waldo from the safety of an airport and a CBP processing facility not on the border and with apparently no contact with Americans living on the border proves she can with a straight face and without her normal deflecting her incompetency chuckle lie with the best of them, blaming who else but Trump and claiming “progress is being made” (if progress means achieving more illegals crossing the border which apparently is the Blues’ goal she is sadly right); Nike CEO seems to show where his loyalties lie claiming Nike is the brand of China and for China, ignoring China’s abysmal record of human rights abuses (If left believes that abuse of human rights is racist like almost everything else in our society they should cease buying Nike products); ESPN commentator Jalen Rose can complain that a white player was picked on the U.S. Olympic Basketball Team that’s OK but if a black player were picked on an otherwise white team like tennis, golf, or swimming an called a token there would be all Hell to pay; looks like the BLM movement has new competition on the block from a group of blacks claiming to be the Al Moroccan Empire which believes the blacks have special rights and privileges such that they are immune from obeying our laws as 4 of them entered a vacant house in New Jersey that had be purchased and was awaiting remodeling and repair, changed the locks and had to be arrested and removed by police; the Blues continue to prove that “racist” is the most overused word in the political dictionary as Red Representative Bob Good is called a racist by Blue Representative Donald Norcross for questioning Education Secretary Miguel Cardona on Critical Race Theory prompting Reds on the Education Committee to demand an apology from Norcross (sadly when Reds have no viable argument they quickly toss out the racist card to squelch any sane discussion of an issue they do not want discussed); Bubba Watson with an 8 shot lead on the Traveler’s Challenge on the Par 4 350 yard 2nd hole separated his driver’s head from the shaft on impact but still managed to place the ball 5 yards from the green to birdie the hole;  as Blues are pushing the false narrative that the Georgia Reds are engaging in black voter suppression by requiring voter IDs, leave it to the political cartoonist to portray the real voter suppression Reds are guilty of thanks to Schumer the Gloomer and Doomer: 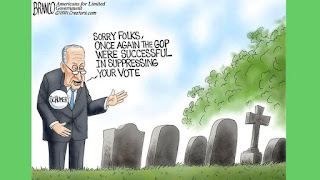 On this day in:
a. 1913 Civil War Veterans from the Union and  the  Confederacy  began arriving in Gettysburg, Pennsylvania for the Great Reunion of 1913.
b. 1950 North Korean forces emboldened by U.S. pronouncements that South Korea was not in its sphere of influence, crossed the 17th Parallel into South Korea to begin the Korean War.
c.  1978 the rainbow flag representing gay pride was flown for the first time in the Gay Freedom Day Parade in San Francisco.
d.  1981 Microsoft was reincorporated in its home state of Washington.
e. 2017 the World Health Organization estimated that Yemen has a plague of over 200,000 cases of cholera.
Reflections on the Great Reunion of 1913: “The great reenactment of Pickett’s charge. . . .  Out of the woods came the Southerners, just as before - well, in some ways just as before.  They came out more slowly this time. . . .  We could see, not rifles and bayonets, but canes and crutches.  We soon could distinguish the more agile ones aiding those less able to maintain their places in the ranks.

Nearer they came, until finally they raised their frightening falsetto scream.  As the Rebel yell broke out after half a century of silence, a moan, a gigantic sigh, a gasp of unbelief, rose from the onlookers.  So “Pickett’s men” came on, getting close at last, throwing that defiant yell up at the stone wall and the clump of trees and the ghosts of the past.

It was then that the Yankees, unable to restrain themselves longer, burst from behind the stone wall, and flung themselves upon their former enemies.  The emotion of the moment was so contagious that there was scarcely a dry eye in the huge throng.  Now they fell upon each other - not in mortal combat, but reunited in brotherly love and affection.

The Civil War was over.” Ken Burns, from his PBS Documentary The Civil War
Please enjoy the poems on events of interest on my twitter account below (if you like them, retweet, and follow me) and follow my blogs. Always good, incisive and entertaining poems on my blogs—click on the links below. Go to www.alaskanpoet.blogspot.com for Ridley’s Believe It Or Not—This Day in History,  poems to inspire, touch, emote, elate and enjoy and poems on breaking news items of importance or go to  Ridley's Believe It Or Not for just This Day in History.

© June 25, 2021 Michael P. Ridley aka The Alaskanpoet
Alaskanpoet for Hire, Poems to Admire
Poet Extraordinaire, Beyond Compare
A Unique Gift, All Recipients a Lasting Gift

Posted by Michael P. Ridley aka the Alaskanpoet at 11:38 PM