June 8,2021 Ridley's Believe It Or Not World Brain Tumor Day

CV Open Gate: Lost in the pronouncements by Biden and his lackeys   that there is no crisis of illegals surging across the border is that fact that COVID-19 is alive and well and spreading in the Northern Triangle and Mexico which has moved down to 11th  on my list of deaths from the pandemic having been passed by Argentina at 1758/M and the 3 countries in the Northern Triangle in terms of active cases and deaths per million are as follows even though the data may be suspect as underreported (regardless of number we need no more cases):

US Vaccinations: As of 6/7/21 302.9 million doses finally after decreasing for several days falling to below 1 million to increase to 1.03 million per day which means if the rate does not increase it will take us now back to some 6 months to have 75% of the population vaccinated which many believe is necessary to develop herd immunity. In California 39,541,180 total doses have been given (82.5% of doses received to exceed the U.S. average of 81.5%), but even with the pressure of a recall to be scheduled this fall which hopefully end Newsom’s term, California has not moved  from  25th out of the 50 states in terms of the percentage of doses administered as a percentage of doses delivered to the states and at 44.9% of its population fully vaccinated compared to the U.S. average of 42.1% has moved up from  19th   to 18th among the 50 states.  A long way to go still to get herd immunity in terms of getting vaccines received into arms and the percentage of the population fully vaccinated compared to other states which means a great reason to recall this inept and hypocritical governor.
Non  CV News: Our MIA immigration czar Harris is getting slammed for seeming      to treat the border as a sick joke which seems to be a trait laughing at facts and questions she seems uncomfortable with; Harris lying that she had been to the southern border and corrected leftist lackey Holt on an interview with her had Psaki in a 1984 like defense of her misstatement that saying she had been to the border counts because members of the Biden Administration have been to the border (residents of border states swamped with record numbers of illegals crossing are being hung out to dry and twist in the wind by this administration); racism may not be systematic in America but it sure is at the MSM as NYT editorial board member Mara Gay after seeing pickup trucks of Long Island with American flags ranted she was not gay but “disturbed” prompting attacks she was playing the race card (this pathetic excuse for a “journalist” must think that only the BLM flag merits display); in a win for common sense, a Virginia District Judge ruled the Louden School Board could not suspend one of its physical education teachers Tanner Cross for refusing to use pronouns requested by transgenders as opposed to those determined by biology at birth; Marcus Eriz has been charged with murder of Aiden Leos and firing a gun at an occupied vehicle and his girlfriend Wynne Lee has been charged with being an accessory after the fact and having a concealed weapon as the prosecution is asking for bail $2,000,000 million for Eriz and $500,000 for Lee; the 4th night of demonstrations in Minneapolis after police shot and killed Winston Boogie Smith, Jr., a black, a after he pointed a gun at them and fired (sadly no bodycams were worn to get a visual record of the shooting that should have defused the anger and demonstrations); in another glaring hypocrisy of BLM who must believe the only black lives that matter are those killed by police whether armed or note, the murder of 10 year old Justin Wallace sitting inside his house by a black shooter firing multiple rounds just outside the residence has not said a word nor has AOC whose district includes parts of Queens; disturbing report out of Chicago that 2021 shootings of kids is 3 times higher than in 2020; Biden has pulled the plug on further negotiations with Red Senators on the size and scope of his budget busting infrastructure bill; Maya Wiley, a leftist endorsed by AOC in the NYC Mayoral Primary is campaigning of a defund the police by $1 billion as crime is soaring yet her affluent neighborhood has hired a security firm (Eric Adams a former NYC police captain has slammed Wiley pointing out the obvious that those not wealthy enough for private security need the safety of a well-funded police force; Obama basking in the efforts of Biden to restore his legacy actually said something of a unifying nature that “cancel culture” has gone overboard in excess and that it is time to realize that “no one is perfect”; in the last several days Miami-Dade has become a zone with mass shootings  becoming common place but at least there is no “Defund the Police” hue and cry as for the next 12 weeks more patrols and more overtime are being mobilized to hit city streets; Iran is being accused by the IAEA prior to its meeting in Vienna that Iran is violating the terms of the Iran nuclear deal that the Biden Administration wants to reinstate; as Biden rants that that white supremacy is an existential threat, leave it to the political cartoonist to portray Biden as a Don Quixote on a donkey with his omnipresent teleprompter and  leveled lance chasing windmills of white supremacy while clear and present deadly dangers are lurking all around him he ignores at our peril: 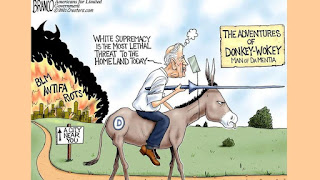 Chicago Gun Violence: Hey Jackass.com is back to show  that   through June  7, 2,021, gun violence involving mostly persons of color shooting mostly persons of color in Chicago is alive and well with 1553 persons shot of whom 267 have died.
As always, I hope you enjoy today’s holidays and observances, factoids of interest for this day in history, a video musical link to “Fantasy” by Iggy Azalea feat. Charli XCX, the fact that you live near the rivage and your flood insurance is in force actions are rarely regarded as risible, and a quote from Philip Garaldi the Israeli attack on the USS Liberty, secure in the knowledge that if you want to send a gift for any memorable events like Father’s Day, college graduations, birthdays, weddings, or anniversaries, you know that the Alaskanpoet can provide you with a unique customized poem at a great price tailored to the event and the recipient. Please contact me for details on pricing.              1.  World Brain Tumor Day—created the Germain Brain Tumor Association in 2000 to advance scientific research in the causes and treatment of brain tumors.
2. World Oceans Day—celebrated for the first time in 1992 with the goal of moving the oceans from the sidelines to the center of the intergovernmental and NGO discussions and policy and to strengthen the voice of ocean and coastal constituencies worldwide.
3. 2014 Number 1 Song USA—the number 1 song in 2014 on this day was “Fancy” by Iggy Azalea feat. Charli XCX on a run of 7 weeks in that position to join 9 other songs reaching number 1 and 5 other acts that achieved their first number 1 song either as the lead artist or featured guest.  Here is a video recording by Iggy Azalea feat. Charli XCX of “Fancy”: https://www.youtube.com/watch?v=O-zpOMYRi0w Iggy Azalea was born in Australia on June 7, 1990 and moved to the U.S. at age 16 to further her music career. This singer/songwriter, rapper and model has sold over 40 million records and has one son born out of wedlock and not in any relationships today.
4.  Word of the Day—-the word for today is “rivage” which  means  shore or  coast which usually describes a great place to live near assuming you have flood insurance in force.
5.  Where Would We Be Without This Cyber Knight--celebrating the  birth on this day in 1955 of Sir Timothy John Berners-Lee, noted English computer scientist best known as being the creator of the internet which has made profound changes to our economy, businesses and culture.
On this day in:
a. 1949 George Orwell’s Nineteen Eighty-Four was published.
b. 1953 SCOTUS ruled in the case of District of Columbia v. John R, Thompson Co. that restaurants in the District could not refuse to serve African Americans.
c. 1966 the National Football League and the American Football League announced their merger effective 1970.
d. 1967 the USS Liberty, an electronic surveillance ship on the coast of Egypt in international waters was attacked by Israeli fighter jets and motor torpedo boats which killed 34 sailors and wounded 171 and severely damaged the vessel before ceasing their attacks.
e. 1968 James Earl Ray, who pled guilty to the assassination of Martin Luther King, JR. and who later tried unsuccessfully to recant that plea, was arrested at Heathrow airport in London trying to leave the country on a false passport.
Reflections on the Israeli attack on the U.S.S. Liberty: Israel’s apologists, a virtual fixture at all levels in the U.S. government as well as in academia and the media, have long been making the argument that the attack on the Liberty was some kind of “friendly fire” accident. But the relatively recent discovery that a Navy spy plane intercepted and recorded Israeli both helicopter and fighter pilots mentioning the American flag displayed by the ship during the attack suggests otherwise. Other recordings made of the Israeli communications revealed that some of the pilots did not want to attack. One pilot said, “This is an American ship. I can see the flag. Do you still want us to attack?” Israeli ground control responded, “Yes, follow orders. Hit it!” before admonishing the pilots to “finish the job.” Philip Giraldi in Israel's War Crimes Have Killed Americans, If the president loves to honor the military, sthe U.S.S. Liberty, Unz Review, (5 May 2020).
Please enjoy the poems on events of interest on my twitter   account below (if you like them, retweet, and follow me) and follow my blogs. Always good, incisive and entertaining poems on my blogs—click on the links below. Go to www.alaskanpoet.blogspot.com for Ridley’s Believe It Or Not—This Day in History,  poems to inspire, touch, emote, elate and enjoy and poems on breaking news items of importance or go to  Ridley's Believe It Or Not for just This Day in History.

© June 8, 2021 Michael P. Ridley aka The Alaskanpoet
Alaskanpoet for Hire, Poems to Admire
Poet Extraordinaire, Beyond Compare
A Unique Gift, All Recipients a Lasting Gift

Posted by Michael P. Ridley aka the Alaskanpoet at 6:44 PM