June 21, 2021 Ridley's Believe It Or Not International Day of Yoga

US Vaccinations: As of 6/19/21 317.1 million doses finally after increasing slightly for several days to decrease from 1.36 million per day to 1.29 million which means if the rate does not increase it will take us still some 4 months to miss Biden’s goal of having 75% of the population vaccinated by the 4th of July which many believe is necessary to develop herd immunity. In California 41,346,145 total doses have been given (85.1% of doses received to exceed the U.S. average of 83.7%), but even with the pressure of a recall to be scheduled this fall which hopefully end Newsom’s term, California has finally  moved up from 24th  to 22nd of the 50 states in terms of the percentage of doses administered as a percentage of doses delivered to the states and at 47.9% of its population fully vaccinated compared to the U.S. average of 44.9% has not moved from 18th among the 50 states.  A long way to go still to get herd immunity in terms of getting vaccines received into arms and the percentage of the population fully vaccinated compared to other states which means a great reason to recall this inept and hypocritical governor.
Non  CV News: SCOTUS ruled 9-0 that the NCAA violated anti-trust rules by limiting the amount of aid  schools could pay to student athletes for musical instruments, scientific equipment, postgraduate scholarships, tutoring, academic awards and paid internships but left in place rules prohibiting the payment of salaries for playing or gifts of money and property to choose a college; Chelsea Wolfe, a biologic male who identifies as a transwoman, has won an alternate spot on the US BMX biking team in the Tokyo Olympics and has stated her goal to win a medal so she can burn the American flag while standing on the tri-level podium (1968 Olympics Black Power salute déjà vu for which if she does like then she should be immediately expelled from the Olympic Village and sent home and another example of the unfair advantage leading to the end of women’s gains under Title IX); a waitress at Nifty Fifties in Washington Township, New Jersey ran after 5 patrons who left without paying a $70 check and was abducted, assaulted and then thrown out of the car (lucky she wasn’t killed and should have taken down license plate but maybe restaurant is allowed to  dock her pay if patrons flee without paying); in 1865 Juneteenth was a cause to celebrate the freeing of the slaves in Texas but in 2021 it was a scene of celebrations sullied by shootings in 7 locations across the nation with 8 killed and dozens wounded; VP Harris who has shown herself to be totally incompetent on the border crisis, and  seems incompetent on pushing through “voting rights”, now has a new task to reaffirm her incompetence—Biden’s expanded child care tax credit; the idea that someone would pay $500,000 to Hunter Biden who has no artistic talent for a painting other than for the promise of quid pro quo with his father defies any sense of reality; with this nation beset with more problems than it can shake a stick at leave it to the political cartoonist to show a frail Biden being given the  issue that he should inanely focus on: 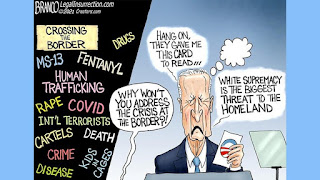 Chicago Gun Violence: Hey Jackass.com is alive and well to collect data to show that through June 19, 2,021, gun violence involving mostly persons of color shooting mostly persons of color in Chicago is alive and well with 1781 persons shot of whom 309 have died.
As always, I hope you enjoy today’s holidays and observances, factoids of interest for this day in history, a recording musical link to “The Woodpecker Song” by Glenn Miller and His Orchestra with vocals by Marion Hutton,  the fact that when your house is free of rubigo  and a quote by Aadil Palkhivala  on the nature of yoga, secure in the knowledge that if you want to send a gift for any memorable events like Fourth of July, college graduations, birthdays, weddings, or anniversaries, you know that the Alaskanpoet can provide you with a unique customized poem at a great price tailored to the event and the recipient. Please contact me for details on pricing.
1.  International Day of Yoga—created by the General Assembly after a suggestion by India’s Prime Minister Modi’s address to the UN in 2014 and first celebrated on this day in 2015 to promote the benefits of yoga toward one’s health and tranquility.
2.  World Hydrographic Day—created in 2005  by the International Hydrographic Organization and adopted by the General Assembly to give proper publicity for its work and to promote the global dissemination of hydrographic information.
3. 1940 Number 1 Song USA—the number 1 song in 1940 on this day   was “The Woodpecker Song” by Glenn Miller and His Orchestra on a run of 7 weeks in that position. Here is a recording by Glenn Miller and His Orchestra with vocals by Marion Hutton:  https://www.youtube.com/watch?v=i6GA4leN60w Marion was Betty Hutton’s sister and sang for Glenn Miller from 1938 to 1942 and died of cancer, most likely lung as she advertised for Chesterfield, at the age of 67 on January 10, 1987.
4.  Word of the Day—the word of the day is “rubigo” which means mildew which is something to not let go unchecked in your house.
5.  Smart But Not Smart Enough--celebrating the birth on this day in 1921 of Judy Holliday, a noted actress who was reputed to have an IQ of 172 but not smart enough to avoid becoming addicted to nicotine and was a heavy smoke who died way too early in her career from throat cancer on June 7, 1965, at age 43.

On this day in:
a. 1919 Admiral Ludwig von Reuter ordering the scuttling of the  German Fleet of 74 ships that was interned at Scapa Flow under the terms of the Armistice in a move that sank 52 of the ships and caused the death of 9 German sailors.
b. 1940 in what was termed a “stab in the back” Italy in a preview of its ineptness in modern warfare invaded France only to be stalled by a depleted French Army after an advance of a few kilometers.
c. 1982 John Hinckley was found not guilty by reason of insanity for the attempted assassination of President Ronald Reagan.
d. 1989 SCOTUS ruled in the case of Texas v. Johnson that burning of the American flag was a form of expression protected by the First Amendment.
e. 2005 Edgar Killen, whose trial in 1966 years ago for the murder of James Cheney, Andrew Goodman and Mickey Schwerner ended in a hung jury with the jury voting 11-1 for conviction with the prosecution refusing to retry, was convicted of manslaughter of those 3 and sentenced to 60 years to die in prison on January 11, 2018, 6 days before his 93rd birthday.
Reflections on the art and practice of yoga: “True yoga is not about the shape of your body, but the shape of your life. Yoga is not to be performed; yoga is to be lived. Yoga doesn’t care about what you have been; yoga cares about the person you are becoming. Yoga is designed for a vast and profound purpose, and for it to be truly called yoga, its essence must be embodied.”– Aadil Palkhivala, one of the foremost yoga teachers in the world
Please enjoy the poems on events of interest on my twitter account below (if you like them, retweet, and follow me) and follow my blogs. Always good, incisive and entertaining poems on my blogs—click on the links below. Go to www.alaskanpoet.blogspot.com for Ridley’s Believe It Or Not—This Day in History,  poems to inspire, touch, emote, elate and enjoy and poems on breaking news items of importance or go to  Ridley's Believe It Or Not for just This Day in History.

© June 21, 2021 Michael P. Ridley aka The Alaskanpoet
Alaskanpoet for Hire, Poems to Admire
Poet Extraordinaire, Beyond Compare
A Unique Gift, All Recipients a Lasting Gift

Posted by Michael P. Ridley aka the Alaskanpoet at 10:02 PM