June 17, 2021 Ridley's Believe It Or Not World Day To Combat Desertification And Drought

Standing: On a deaths per million population measure on a steady   but slow climb to 1852 the U.S. ranks behind Peru (5673) the new number 1 which has had a quantum leap in deaths previously unmatched which was a change in the classification to give Peru the a new method of reporting to have a fatality rate of 9.4% of total casesa ans now; Hungary the new number 2 has had a huge continuing surge in deaths with the increase now slowing down and improving slightly to  3.92% of its closed cases have died (3108), aping Hungary in terms of increase in deaths Bulgaria 2603),   Brazil (2308) which has been hit with a rapid rise in deaths and cases and passed us and Italy, Belgium (2158), (Italy (2107), Poland (1977) and the UK (1875) which had passed us despite leading world in testing and now has new deaths barely increasing), and Argentina (1914), and slightly better than Mexico (1771), Spain (1724),  France (1690), Romania (1680),  Portugal (1677),  Chile (1616), Sweden (1431) that never closed its economy down like we did, Bolivia (1338) and Switzerland (1247).
Tests: We have now conducted 497,238,570 tests (now at 1,493,836/M) compared to number 2 now France at 1,374,844/M) as we are conducting more tests in number and on a per capital basis for all nations (other than those nations that contain small populations like Bahrain, Denmark, Israel, Malta, Singapore and UAE) other than the U.K. which remains as king of the mountain with respect to tests at 2,914,434/M.
CV Open Gate: Lost in the pronouncements by Biden and his lackeys   that there is no crisis of illegals surging across the border is that fact that COVID-19 is alive and well and spreading in the Northern Triangle and Mexico which been passed by Argentina to move down to 11th  on my list of deaths from the pandemic  at 1771/M with a fatality rate of 10.52% of closed cases and the 3 countries in the Northern Triangle in terms of active cases and deaths per million are as follows even though the data may be suspect as underreported (regardless of number we need no more cases):

US Vaccinations: As of 6/17/21 315 million doses finally after decreasing for several days falling to below 1 million to increase from 1.14 million per day to 1.33 million which means if the rate does not increase it will take us now down to some 4 months to miss Biden’s goal of having 75% of the population vaccinated which many believe is necessary to develop herd immunity. In California 41,042,422 total doses have been given (84.7% of doses received to exceed the U.S. average of 83.5%), but even with the pressure of a recall to be scheduled this fall which hopefully end Newsom’s term, California has finally  moved from  24th to 23rd of the 50 states in terms of the percentage of doses administered as a percentage of doses delivered to the states and at 47.5% of its population fully vaccinated compared to the U.S. average of 44.5% has not moved from 19th among the 50 states.  A long way to go still to get herd immunity in terms of getting vaccines received into arms and the percentage of the population fully vaccinated compared to other states which means a great reason to recall this inept and hypocritical governor.
Non  CV News: After watching Biden stumble through the G-7 and his reporting of his summit with Putin, former White House Physician Ronny Jackson is demanding that Biden take a cognitive awareness test as he believes he is not mentally or physically fit to lead this nation; to the wrath of progressives SCOTUS ruled 9-0 that a Catholic foster care agency can bar same sex couples from participating (exposing the idiocy of the Blues claiming that SCOTUS is an arm of the Reds); Portland’s highly trained rapid response team formed to deal with riots and severe criminal activity has unanimously resigned from the unit after one of its members during a riot in August setting fire to the Multnomah Building was indicted for allegedly striking a rioter on the ground (omen of things to come with the defund the police and anti-police rhetoric and bias in Blue led city governments); Little Fredo Chris Cuomo after daring viewers to point out his bias was hit with a flood of tweets detailing examples https://alaskanpoet.blogspot.com/2021/06/chris-cuomo-mocked-big-time-for-claim.html; the St. Louis couple who pointed guns at a BLM mob who broke into their gated community who were charged with the felony of illegal use of a weapon have pled guilty to a stage 4 misdemeanor of causing apprehension, paid a $750 fine and forfeited the 2 guns pointed (although the charges originally brought were a Soros funded tragedy understand why they would plead and be rid of the problem); Newsom must have allowed reality to overcome his ego and has launched an ad campaign to counter the soon to be scheduled recall election; Pelosi must be shaking her Botox ravage head in fear as she has appointed her nemesis AOC to a new House Committee she formed to address wealth inequality in America; Mayor Lightfoot, who is a modern day Nero as Chicago continues to be gripped with a scourge of color on color shootings and killings that she is clueless on how to curtail, now claims that racism is a public health crisis (a mayor who demands more office time to get away from Chicago’s problems, bars whites from interviews, and ignores the public health crisis of people of color shooting and killing people of color is the true racist); Lightfoot is rightfully being slammed by a Blue Alderman for now seeking federal help from Biden but refusing it from Trump as hundreds upon hundreds of blacks died like flies; Buckhead a suburb of Atlanta has filed papers to incorporate itself from Atlanta and fund its own police department and city services; stymied by his efforts to profit from his father’s positions with the scams at Burisma and the Chinese Venture Capital Fund, Hunter Biden with no prior art experience is selling his artwork (aka access to the president) for a minimum of $500,000 a pop with purchasers’ IDs kept secret; if you are a Scotch drinker, you will be pleased that the Biden Administration has scrapped the 25% tariff levied by the Trump Administration as a result of the EU subsidies in the Boeing Airbus dispute; as more and more Americans are becoming concerned over the politization of the DOJ against conservative thought, leave it to the political cartoonist to expose the danger and the double standard of our AG: 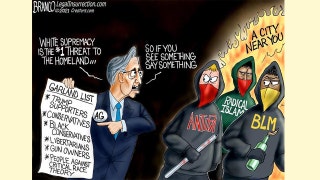 Chicago Gun Violence: Hey Jackass.com is alive and well to collect data to show that   through June 15, 2,021, gun violence involving mostly persons of color shooting mostly persons of color in Chicago is alive and well with 1707 persons shot of whom 295 have died.
As always, I hope you enjoy today’s holidays and observances, factoids of interest for this day in history, a recording musical link to “Is It True What They Say About Dixie” by Jimmy Dorsey and His Orchestra,  the fact that you do not speak rottack, and a quote from Mohammad Ali on the effects of being a garbageman, secure in the knowledge that if you want to send a gift for any memorable events like Father’s Day, college graduations, birthdays, weddings, or anniversaries, you know that the Alaskanpoet can provide you with a unique customized poem at a great price tailored to the event and the recipient. Please contact me for details on pricing.
1.  World Day to Combat Desertification and Drought—created by the UN General Assembly on January 30, 1995, to promote awareness of desertification and the effect of land use and water use practices on the creation of and the effect on by drought.
2.  National Garbage Man Day—created by John Arnold in 2011  to  honor those workers who pick up our waste and deliver it to sorting centers for recycling before delivering the residue to landfills.
3. 1936 Number 1 Song USA—the number 1 song in 1936 on this day was “Is It True What They Say About Dixie” by Jimmy Dorsey and his Orchestra a run of 4 weeks in that position. Here is a recording by Jimmy Dorsey and his Orchestra with vocals by Bob Eberle of “Is True What They Say About Dixie: https://www.youtube.com/watch?v=L9_g98kzzmo
4.  Word of the Day—-today’s word is “rottack” which means rubbish or nonsense which describes to often to ae tee what we hear when we listen to the MSM.
5.  To Lose a Battle--celebrating the birth on this day in 1989 singer, actress and dancer Simone who was winning the war of career advancement but lost the battle of depression and committed suicide by hanging herself on September 5, 2014 at age 25.

On this day in:
a. 1885 the crated Statute of Liberty arrived in New York City to be later assembled and placed where it sits today.
b. 1939 Eugene Weidmann, a convicted serial murderer, had the dubious distinction of being the last person in France to be publicly guillotined.
c. 1963 SCOTUS in the case of Abington School District  v. Schempp ruled against requiring the reciting of Bible verses and the Lord’s Prayer in public schools.
d. 1994 in a low-speed chase on the 405 Freeway OJ Simpson with his friend Al Downing as a passenger was watched by millions on a low-speed caravan back to Brentwood where he was charged with the murder of Nicole Brown Simpson and Ronald Goldman.
e. 2015 a self-proclaimed white supremacist Daniel Root attacked a  Bible Study Group at the Emanuel Methodist Baptist Church in Charleston, South Carolina killing 9 African Americans; Root was tried, convicted and sentenced to death and is now in a federal prison while his case is under appeal.
Reflections on being a garbageman: “You could be the world's best garbage man, the world's best model; it don't matter what you do if you're the best. — Muhammad Ali.
Please enjoy the poems on events of interest on my twitter account below (if you like them, retweet, and follow me) and follow my blogs. Always good, incisive and entertaining poems on my blogs—click on the links below. Go to www.alaskanpoet.blogspot.com for Ridley’s Believe It Or Not—This Day in History,  poems to inspire, touch, emote, elate and enjoy and poems on breaking news items of importance or go to  Ridley's Believe It Or Not for just This Day in History.

© June 17, 2021 Michael P. Ridley aka The Alaskanpoet
Alaskanpoet for Hire, Poems to Admire
Poet Extraordinaire, Beyond Compare
A Unique Gift, All Recipients a Lasting Gift

Posted by Michael P. Ridley aka the Alaskanpoet at 8:51 PM