June 11, 2021 Ridley's Believe It Or Not National Wedding Day

Standing: On a deaths per million population measure on a steady but slowing climb to 1845 the U.S. ranks behind Peru (5624 the new number 1 which has had a quantum leap in deaths previously unmatched which may be a change in the method of reporting; Hungary the new number 2 has had a huge continuing surge in deaths with the increase now slowing down and improving slightly to  3.96% of its closed cases have died (3103), aping Hungary in terms of increase in deaths Bulgaria 2593),   Brazil (2253) which has been hit with a rapid rise in deaths and cases and passed us and Italy, Belgium (2154), (Italy (2101), Poland (1971) and the UK (1875) which had passed us despite leading world in testing and now has new deaths barely increasing),  and slightly better than Argentina (1841), Mexico (1763), Spain (1720),  France (1686), Portugal (1676), Romania (1657),  Chile (1574), Sweden (1431) that never closed its economy down like we did but has recently been experiencing a steady rise in deaths, Bolivia (1290) and Switzerland (1246).
Tests: We have now conducted 491,905,860 tests (now at 1,477,956/M) compared to number 2 now France at 1,345,443/M) as we are conducting more tests in number and on a per capital basis for all nations (other than those nations that contain small populations like Bahrain, Denmark, Israel, Malta, Singapore and UAE) other than the U.K. which remains as king of the mountain with respect to tests at 2,832,890/M.
CV Open Gate: Lost in the pronouncements by Biden and his lackeys   that there   is no crisis of illegals surging across the border is that fact that COVID-19 is alive and well and spreading in the Northern Triangle and Mexico which has moved down to 11th  on my list of deaths from the pandemic having been passed by Argentina at 1763/M and the 3 countries in the Northern Triangle in terms of active cases and deaths per million are as follows even though the data may be suspect as underreported (regardless of number we need no more cases):

US Vaccinations: As of 6/10/21 305.7 million doses finally after decreasing       for  several days falling to below 1 million to increase again to 1.14 million per day which means if the rate does not increase it will take us now down to some 5 months to have 75% of the population vaccinated which many believe is necessary to develop herd immunity. In California 39,765,872 total doses have been given (82.7% of doses received to exceed the U.S. average of 82.0%), but even with the pressure of a recall to be scheduled this fall which hopefully end Newsom’s term, California has not moved  up from  25th   to 24th out of the 50 states in terms of the percentage of doses administered as a percentage of doses delivered to the states and at 45.3% of its population fully vaccinated compared to the U.S. average of 42.6% has not moved up  from  19th among the 50 states.  A long way to go still to get herd immunity in terms of getting vaccines received into arms and the percentage of the population fully vaccinated compared to other states which means a great reason to recall this inept and hypocritical governor.
Non  CV News: The backlash against the teaching of the insanity of Critical Race Theory continues to grow as even black parents are condemning it for dividing kids based on the color of their skin and permanently turning them into racial oppressors or oppressed https://www.foxnews.com/us/black-mother-slams-critical-race-theory;  CNN is being rightfully slammed as it allows the on camera masterbator Jeffrey Toobin to return to the network of pure biased cack; in what must have been a bitter divorce with probably some parent alienation syndrome involved, a Virginia father dumped his last $800 a month child support payment in the form of 80,000 pennies on his ex-wife’s front lawn which with his estranged daughter’s agreement was donated to a battered woman’s shelter; with a record number of 180,000 illegals crossing the border in May with many of them lining the Mexican cartels’ pockets, FBI Director Wray has confirmed the obvious that cartel activity is spreading into the U.S.; Time which used to be worth reading on its cover is using drawing instead of a photo of Biden which would reveal his aging and frail state trying to make him look “cool” when the C word that should be used is “clueless”; 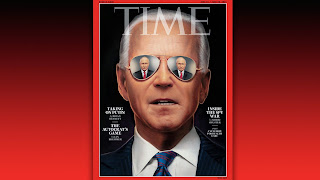 the Blues pushing H.R. 4 as the “John Lewis Voting Rights Bill” that would federalize state election practices under the myth of ongoing black voter suppression have been caught with lies as the Blue run state of Massachusetts has the lowest black voter participation and the Red run states of Mississippi and Tennessee have the highest; just like BLM hypocritically believes that only black lives ended by police matter the Congressional Black Caucus believes that any black Red Congressman is not black enough to be admitted; the left’s mantra that climate change will result in stronger and more storms has been dealt a severe setback with news that for the first time in 70 years’ May resulted in no tornadoes stronger than EF3; the politization of the DOJ which had been curtailed in the Trump Administration is back pedal to the metal with the AG Garland doubling the number of DOJ lawyers involved with voting issues with the inflation vultures coming home to roost, leave it to the political cartoonist to portray the effects of trillions of dollars printed for stimulus spending, minimum wage increases and increased unemployment insurance benefits encouraging jobless not to return to work: 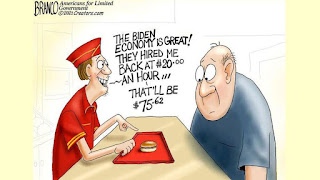 Chicago Gun Violence: Hey Jackass.com is back to show that   through June 10, 2,021, gun violence involving mostly persons of color shooting mostly persons of color in Chicago is alive and well with 1601 persons shot of whom 277 have died.
As always, I hope you enjoy today’s holidays and observances, factoids of interest for this day in history, a video musical link to “Despacito” by Louis Fonsi and Daddy Yankee feat. Justin Bieber, the fact that you are roborean in nature, and a quote from Stephen Jones, counsel for Timothy McVeigh on the impact of his acts, secure in the knowledge that if you want to send a gift for any memorable events like Father’s Day, college graduations, birthdays, weddings, or anniversaries, you know that the Alaskanpoet can provide you with a unique customized poem at a great price tailored to the event and the recipient. Please contact me for details on pricing.
1.  National Wedding Day—celebrated on the second Friday in June not        to encourage marriages but to commemorate Elkton, Maryland with its no waiting, no blood test, no witnesses requirement to get married being the “Marriage Capital of the East with dozens of wedding chapels holding very large numbers of weddings each year.
2. King Kamehameha Day—celebrating the achievement of  King Kamehameha 1 who established a kingdom over all of the Hawaiian Islands since 1872.
3. 2017 Number 1 Song USA—the number 1 song in 2017 on this day       was  “Despacito” by Louis Fonsi and Daddy Yankee feat. Justin Bieber on a run of 16 weeks in that position to join 11 other songs reaching number 1 and 10 other acts that achieved their first number 1 song either as the lead artist or featured guest.  Here is a video recording by Louis Fonsi and Daddy Yankee feat. Justin Bieber of “Despacito”: https://www.youtube.com/watch?v=dr_GAJZviR0
4.  Word of the Day—-the word for today is “roborean” which means strong like an oak which is a good characteristic to have in dealing with issues confronting us today.
5.  Big C Faster Than Most Runners--celebrating the   birth on this day in 1964 of Kim Gallagher an Olympic medalist runner who after the 1988 Olympics was diagnosed with colon cancer but opted out of chemotherapy and instead used vitamins, diet and rest to keep it in remission until it came back in spades in 1994 to take away after 8 years her running shoes for good on November 18, 2002.

On this day in:
a. 1919 Sir Barton won the first Triple Crown.
b. 1963 a Buddhist monk Thich Quang Duc fatally burned himself to death in   a busy Saigon intersection with gasoline to protest lack of religious freedom in South Vietnam.
c. 1971 the U.S. forcibly removed the last holdouts of the 17 month occupation of Alcatraz Island by Native Americans.
d. 1998 Compaq Computer paid $9 billion to acquire Digital Equipment Corporation.
e. 2001 Timothy McVeigh was executed for the Oklahoma City Bombing.                               Reflections on the impact of what Timothy McVeigh did:  For those of us in Oklahoma, the bombing of the Alfred P. Murrah Federal Building is the event by which we measure time. It is to my generation in Oklahoma what Pearl Harbor was to my parents’ generation. -Stephen Jones, counsel who defended Timothy McVeigh.                                Please enjoy the poems on events of interest on my twitter   account below (if you like them, retweet, and follow me) and follow my blogs. Always good, incisive and entertaining poems on my blogs—click on the links below. Go to www.alaskanpoet.blogspot.com for Ridley’s Believe It Or Not—This Day in History,  poems to inspire, touch, emote, elate and enjoy and poems on breaking news items of importance or go to  Ridley's Believe It Or Not for just This Day in History.

© June 11, 2021 Michael P. Ridley aka The Alaskanpoet
Alaskanpoet for Hire, Poems to Admire
Poet Extraordinaire, Beyond Compare
A Unique Gift, All Recipients a Lasting Gift

Posted by Michael P. Ridley aka the Alaskanpoet at 1:45 PM