June 18, Ridley's Believe It Or Not Autistic Pride Day

US Vaccinations: As of 6/18/21 316 million doses finally after decreasing for several days falling to below 1 million to increase from 1.33 million per day to 1.36 million which means if the rate does not increase it will take us now down to some 4 months to miss Biden’s goal of having 75% of the population vaccinated by the 4th of July which many believe is necessary to develop herd immunity. In California 41,189,877 total doses have been given (84.9% of doses received to exceed the U.S. average of 83.6%), but even with the pressure of a recall to be scheduled this fall which hopefully end Newsom’s term, California has finally  moved down from 23rd to 24th of the 50 states in terms of the percentage of doses administered as a percentage of doses delivered to the states and at 47.7% of its population fully vaccinated compared to the U.S. average of 44.7% has not moved up from 19th to 18th among the 50 states.  A long way to go still to get herd immunity in terms of getting vaccines received into arms and the percentage of the population fully vaccinated compared to other states which means a great reason to recall this inept and hypocritical governor.
Non  CV News: Macy Gray as we approach the 4th of July is making a run at being the Woke Cancel Culture Queen ranting our flag is out dated, divisive, and doesn’t represent the different races and short changes the Swamp and Puerto Rico which should be states (she should stick to resurrecting her career as a singer and be thankful this “systematic racist” nation rule by “white supremacists” has enable her to make a pretty good living and that she can voice such inane ideas) as shootings in cities are rising off the charts and police are being demonized and seeing their budgets cut, gun sales are going through the roof and gun buyers are finding it harder to find ammo on the shelves; at a virtual conference of Catholic Bishops, 73% voting in favor a drafting new protocols on communion and whether politicians supporting abortion and other positions antithetical to key doctrinal stands of the Catholic Church should receive communion (looks like the two most notable Catholics Biden and Pelosi may have to choose between party and faith); an Illinois black father Ty Smith has shredded the cramming of Critical Race Theory down children’s throats which has gone viral (the nail in the coffin to the teaching of Critical Race Theory is “How do I have two medical degrees if I’m sitting here oppressed?”;  Biden who has the press fawning over and lauding profusely his every move like he walks on water during the summertime seems to be snapping more than a turtle when reporters have the temerity to ask him a non T-Ball or softball question (his normal personality or another example of fading mental state?); NASA may be planning a mission to Venus but closer to home it is seeking input on how to achieve “equity” in its programs; while the West is sweltering under a massive heat wave, Death Valley, living up to its name, recorded a temperature of 128 degrees; the ultra leftwing on line magazine Slate is slamming Krysten Sinema as a “toxic white lady” for some of her more moderate positions such as not wanting to end the filibuster right in the Senate in a Slate podcast (totally despicable for this leftist online rag to attack a person based on race then branch out an attack her on her choice of wardrobe-ad hominem to the max); if you want to see “Springsteen on Broadway” you will have to show proof of full vaccination by Pfizer, Moderna or Johnson & Johnson to get in; Shelby Houlihan after eating a burrito with tainted pork offal has lost her appeal and will be banned from the Tokyo Olympics and even the trials for it; while Biden and Harris have their heads stuck in the sands of illegal alien migration crisis denial, Texas is charging forward to start building a wall and is moving out inmates from South Texas prison to make room for the illegal aliens who will commit or who have committed crimes; Don Lemon whose ratings are in the toilet was ranting inanely that parents who oppose critical race theory are “privileged” and was shredded by Kayleigh McEnaney pointing out the obvious that regardless of race parents don’t want to have their kids branded that are oppressors or oppressed; the EU has ended its ban of nonessential travel from the U.S. but even though over half of the U.K. has been vaccinated and new cases and deaths are barely increasing, such travel is still banned from the UK; a video in NYC captured the shocking shooting by a black gang member of another while two small children are inches away from the victim; https://www.foxnews.com/us/nyc-gunman-shoots-man-bronx-broad-daylight-violence; after looking like a weak and frail person fearing to stand up to Putin, it appears that he has canceled a military aid package to the Ukraine which should be an open signal to Putin that like the Crimea, Ukraine is yours for the taking; the idea that someone would pay $500,000 for a painting from Hunter Biden reeks of potential quid pro quo from Joe; so leave it to the political cartoonist to expose the obvious sordid connection: 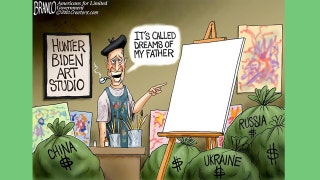 Chicago Gun Violence: Hey Jackass.com is alive and well to collect data to show that   through June 17, 2,021, gun violence involving mostly persons of color shooting mostly persons of color in Chicago is alive and well with 1724 persons shot of whom 298 have died.
As always, I hope you enjoy today’s holidays and observances, factoids of interest for this day in history, a recording musical link to “September in theRain” by Guy Lombardo and His Orchestra with vocals by Carmen Lombardo,  the fact that you are much more than a mere roué  and a quote from UN Secretary General Ban Ki-Moon on autism, secure in the knowledge that if you want to send a gift for any memorable events like Father’s Day, college graduations, birthdays, weddings, or anniversaries, you know that the Alaskanpoet can provide you with a unique customized poem at a great price tailored to the event and the recipient. Please contact me for details on pricing.                                  1.  Autistic Pride Day—created by the Aspies for Freedom in 2005 with the date chosen as it was the birthday of the youngest member of the group to promote acceptance of those with autism and to recognize their contributions to our society and culture.                       2.  National Day Of Prayer for Law Enforcement Officers—created by the group
Wives Behind the Badges, Inc. in 2011 and celebrated on the 3rd Friday in June to promote respect for law enforcement officers and support polices that enhance their safety and join in prayer that they come home live at the end of their work shift.
3. 1937 Number 1 Song USA—the number 1 song in 1937 on this day       was “September in the Rain” by Guy Lombardo and His Orchestra on a run of 4 weeks in that position. Here is a recording by Guy Lombardo and His Orchestra with vocals by Carmen Lombardo, Guy Lombardo’s younger brother of “September in the Rain”:  https://www.youtube.com/watch?v=PLqODPIkWo4
4.  Word of the Day—the word of the day is “roué” which means a  man devoted to a life of pleasure.
5.  To Succeed Without a Sheepskin--celebrating the birth on this day in 1917 of noted big screen and TV actor who learned his craft thanks to the GI Bill after 4 years of service in the Navy in WWII, Richard Boone who attended Stanford but did not graduate. He is perhaps best remembered for the 6 year series of Have Gun—Will Travel playing the role of Paladin. A heavy smoker, he contracted throat cancer and died from it on January 10, 1981 at the age of 63.
On this day in:
a. 1815 Napoleon was defeated in the Battle of Waterloo by the British and Prussian forces commanded by Duke of Wellington and General Gebhard Leberecht von Blücher, respectively and was forced to abdicate his rule of France as Emperor for the second time and go into exile on the remote island of St. Helena, located some 1200 miles west of Africa and 2500 miles east of Rio de Janeiro where he would die on May 5, 1821.
b. 1945 William Joyce aka” Lord Haw-Haw” who broadcast pro-Nazi anti-British propaganda during World War II was arrested for treason. He was tried, found guilty and had the dubious distinction of being the last person executed in Great Britain for treason by hanging on January 3, 1946 at age 39.
c. 1948 Columbia Records introduced the long playing 33 r.p.m record at a demonstration at the Waldorf Astoria Hotel in NYC.
d. 1981 the F-117 Nighthawk, the first jet warplane designed to maximize stealth technology made its first flight.
e. 1983 17 year old Mona Mahmudnizhad, an Iranian Baháʼí and nine other women of her faith, were hanged in Shiraz, Iran for the crime of being a member of the Baháʼí.
Reflections on autism: “To measure the success of our societies, we should examine how well those with different abilities, including persons with autism, are integrated as full and valued members.”-UN Secretary General Ban Ki-Moon                                        Please enjoy the poems on events of interest on my twitter account below (if you like them, retweet, and follow me) and follow my blogs. Always good, incisive and entertaining poems on my blogs—click on the links below. Go to www.alaskanpoet.blogspot.com for Ridley’s Believe It Or Not—This Day in History,  poems to inspire, touch, emote, elate and enjoy and poems on breaking news items of importance or go to  Ridley's Believe It Or Not for just This Day in History.

© June 18, 2021 Michael P. Ridley aka The Alaskanpoet
Alaskanpoet for Hire, Poems to Admire
Poet Extraordinaire, Beyond Compare
A Unique Gift, All Recipients a Lasting Gift

Posted by Michael P. Ridley aka the Alaskanpoet at 11:30 PM