June 28, 2021 Ridleyt's Believe It Or Not International Body Piercing Day

Standing: On a deaths per million population measure on a steady   but slow climb to 1861 the U.S. ranks behind Peru (5741) the new number 1 which has had a quantum leap in deaths previously unmatched which was a change in the classification to give Peru the a new method of reporting to have a fatality rate of 9.37% of total cases now; Hungary the new number 2 has had a huge continuing surge in deaths with the increase now slowing down and improving slightly to  3.90% of its closed cases have died (3112), aping Hungary in terms of increase in deaths Bulgaria (2614),   Brazil (2399) which has been hit with a rapid rise in deaths and cases and passed us and Italy, Belgium (2162), Italy (2112), Argentina (2030), Poland (1983), and the UK (1877) which had passed us despite leading world in testing and now has new deaths barely increasing),  and slightly better than Mexico (1785), Romania (1743), Spain (1727),  France (1697),  Portugal (1680),  Chile (1675), Sweden (1435) that never closed its economy down like we did, Bolivia (1402) and Switzerland (1248).
Tests: We have now conducted 503,818,434 tests (now at 1,513,339/M) compared to number 2 now France at 1,419,669/M) as we are conducting more tests in number and on a per capital basis for all nations (other than those nations that contain small populations like Bahrain, Denmark, Israel, Malta, Singapore and UAE) other than the U.K. which remains as king of the mountain with respect to tests at 3,077,388/M.
CV Open Gate: Lost in the pronouncements by Biden and his lackeys   that there is no crisis of illegals surging across the border is that fact that COVID-19 is alive and well and spreading in the Northern Triangle and Mexico which been passed by Argentina to move down to 11th  on my list of deaths from the pandemic  at 1785/M with a fatality rate of 10.46% of closed cases and the 3 countries in the Northern Triangle in terms of active cases and deaths per million are as follows even though the data may be suspect as underreported (regardless of number we need no more cases):

US Vaccinations: As of 6/28/21 324.4 million doses with after 4 days of decreasing doses finally increasing for 2 days from .803 million per day to .875  million per day which means if the rate does not increase it will take now take us  some 6 months to miss Biden’s goal of having 75% of the population vaccinated which many believe is necessary to develop herd immunity (other than Flip Flop Fauci who is suggesting 90%). In California 42,436,028 total doses have been given (86.6% of doses received to exceed the U.S. average of 85.1%), but even with the pressure of a recall to be scheduled this fall which hopefully end Newsom’s term, California moved from n 21st  to 19th  of the 50 states in terms of the percentage of doses administered as a percentage of doses delivered to the states and at 49.6% of its population fully vaccinated compared to the U.S. average of 46.3% has  moved up from 23rd to 20th among the 50 states.  A long way to go still to get herd immunity in terms of getting vaccines received into arms and the percentage of the population fully vaccinated compared to other states which means a great reason to recall this inept and hypocritical governor.
Non  CV News: In Miami the 11th body has been recovered with over 150 still missing with one of the missing Cassie Stratton calling her husband to tell him the building was shaking and the pool just disappeared before the line went dead; it is easy to disagree with Ilhan Omar but at least she is consistent once again ranting that every illegal here deserves a pathway to citizenship (fails to realize you can’t have a nation without have a secure border to determine who is allowed to enter and stay); SCOTUS failed to grant cert. on a case in which an appellate court ruled against a school district that had barred a biological female transgender who identified as a male from using the men’s restroom at school; grudges against perceived racism evident take a long time to disappear as Scottie Pippen is still calling Bulls coach Phil Jackson a racist for drawing up a play that had a white player Toni Kukoc shoot the last second winning shot in a 1994 playoff game against the Knicks instead of Pippen; the West is suffering from a massive heatwave which has cancelled track and field turnouts in Oregon causing soaring temperatures in Seattle where only 41% of the homes have air conditioning; while de Blasio inanely touts that is time to visit the Big Apple, another shooting in broad daylight in Times Square is caught on surveillance camera fortunately by a black shooter not wearing a mask; with the CDC ruling that fully vaccinated people do not have to wear masks, Ted Cruz is blasting the Biden Administration for still requiring the wearing of masks by vaccinated people 2 years and older while on trains and planes; Jake Tapper the highly biased “journalist” for CNN has lost 75% of his January viewers and is clueless that bias no longer sells (when does the Cack News Network come to its senses and fire him or at least renegotiate his contract with a significant reduction in salary given his ratings; Florence Fang has not been defanged over her “Flintstone” additions to her home and yard in Hillsborough and has settled her law suit against the city for a $125,000 payment to her; the Spanish goaltender Unai Simon tried to freeze a pass from a teammate only to have in bounce over his leg to give Croatia a 1-0 lead but fortunately his teammates scored enough times to bail him out from his error to give Spain a 5-3 victory in the quarter finals; as Biden continues to get fawning praise from the press, leave it to the political cartoonist to portray CNN’s CEO as the shoe licker he is: 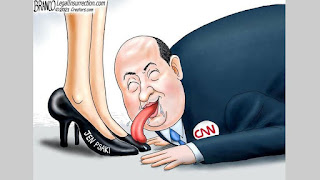 Chicago Gun Violence: Hey Jackass.com is alive and well to collect data to show that through June 26, 2,021, gun violence involving mostly persons of color shooting mostly persons of color in Chicago is alive and well with 1872 persons shot of whom 320 have died.
As always, I hope you enjoy today’s holidays and observances, factoids of interest for this day in history, a recording musical link to “Peg o 'My Heart” by The Harmonicas, the fact that your neighborhood is free of runagates and a quote by Donald Wileman on the Treaty of Versailles, secure in the knowledge that if you want to send a gift for any memorable events like Fourth of July, college graduations, birthdays, weddings, or anniversaries, you know that the Alaskanpoet can provide you with a unique customized poem at a great price tailored to the event and the recipient. Please contact me for details on pricing.

1.  Insurance Awareness Day—clueless as to who created this observance but suspect it is probably an insurance company or agency to promote awareness of the benefits of having one’s insurance in place and current and with limits and coverage appropriate for the risks need to be insured against.

2. International Body Piercing Day—commemorating the art of body pierce that has been with us for a very long time in many societies and celebrated on this day since in is the birthday of Jim Ward who opened the first commercial body piercing shop The Gauntlet in Hollywood on November 17, 1978.

3. 1947 Number 1 Song USA—the number 1 song in 1947 on this day on a run of 1 week in the position was “Peg o’ My Heart” by the Harmonicats to join 10 other songs in the number 1 position. Here is a recording of “Peg o’ My Heart” by the group: https://www.youtube.com/watch?v=9BIuX7IsdE8
4.  Word of the Day—the word of the day is “runagate” which means a fugitive which illegals here who commit crimes find it so easy to become one by crossing the border into Mexico.

5.  Father of Brazilian Rock--celebrating the birth on this day in 1945 of noted Brazilian rock composer, singer, songwriter and producer Raul Seixas who struggled with alcohol and addiction and later developed diabetes and pancreatitis that resulted in a heart attack caused by not taking his insulin that killed him on August 21, 1989 2 days after the release of his last album.

a. 1919 the Treaty of Versailles was signed ending the state of war between the Axis Powers and the Allies to start the clock ticking for the resumption of hostilities in the form of World War II.

b. 1969 the Stonewall Riots began marking the beginning of the Gay Rights Movement.

c. 1978 SCOTUS in the case of The Regents of the University of California v. Bakke  barred racial quotas in university admissions.

d.  1987 for the first time in military history civilians were targeted in a chemical attack as Iraqi warplanes bombed the Iranian town of Sardasht.

e. 1997 in the “Bite Fite” Mike Tyson was disqualified in the 3rd Round in his fight with Evander Holyfield for biting off a piece of Holyfield’s ear.

Reflections on the Treaty of Versailles:  The Germans denounced it as a fraud and a cheat which barely had a nodding acquaintance with the 14 Points.

The French cursed the treaty because they had been led to exchange solid advantages — particularly German territory — for British and US security guarantees — guaranties which then fell through when the US did not ratify the treaty.

By the 1920s most Britons deplored the Treaty as well, both for being unfair to Germany and for being so harsh economically that it kept the economy of Europe from fully recovering from the War.

The US, of course, rejected the Treaty fairly massively.   US citizens saw it as a document which — particularly through the League of Nations, whose Charter was written right into the Treaty — tried to embroil them in the corrupt politics and quarrels of old Europe — which the USA had supposedly been designed as an escape from!

Once another Great War broke out, only 20 years later, the discredit of the Treaty of Versailles was complete.   There are scholars who speak of the time between the wars as a 20 years armistice and nothing more.”  Donald G. Wileman, Ph.D, lecturer at York University, Ontario, Canada

© June 28, 2021 Michael P. Ridley aka The Alaskanpoet
Alaskanpoet for Hire, Poems to Admire
Poet Extraordinaire, Beyond Compare
A Unique Gift, All Recipients a Lasting Gift

Posted by Michael P. Ridley aka the Alaskanpoet at 4:37 PM