US Vaccinations: As of 6/19/21 317.1 million doses finally after increasing slightly for several days to decrease from 1.36 million per day to 1.29 million which means if the rate does not increase it will take us still some 4 months to miss Biden’s goal of having 75% of the population vaccinated by the 4th of July which many believe is necessary to develop herd immunity. In California 41,346,145 total doses have been given (85.1% of doses received to exceed the U.S. average of 83.7%), but even with the pressure of a recall to be scheduled this fall which hopefully end Newsom’s term, California has finally  moved up from 24th  to 22nd of the 50 states in terms of the percentage of doses administered as a percentage of doses delivered to the states and at 47.9% of its population fully vaccinated compared to the U.S. average of 44.9% has not moved from 18th among the 50 states.  A long way to go still to get herd immunity in terms of getting vaccines received into arms and the percentage of the population fully vaccinated compared to other states which means a great reason to recall this inept and hypocritical governor.
Non  CV News: If you were hoping for some sanctions top deter China from replicating its behavior on a new virus don’t hold your breath as all we got out of Biden at the G-7 is a threat that China faces isolation from the world community if it does not cooperate with WHO on the origins of the virus (if President Xi is shaking it is not from fear but laughter); the 2024 Presidential Race is a long way off but a straw vote at the Western Conservative Conference showed Ron DeSantis leading Trump as a favored candidate for the Red nomination with a 74% approval rate compared to Trump’s 71%; even though Justice Barret voted in the 7-2 majority that 18 states trying to repeal Obamacare lacked standing to sue, Sanders is still ranting against her that she wants to take away healthcare from millions of Americans; gay Mayor Dean Trantalis of Fort Lauderdale is being rightfully trashed for attacking the truck driver who drove into a Pride Day Parade as a terrorist attack against the LBGT community before it was revealed that the driver is a member of the Fort Lauderdale Gay Men’s Choir; BLM which seems Marxist and seems to believe that only blacks shot by police matter is now facing a new counter organization Every Black Life Matters to promote the obvious that all black lives matter and to focus on issues other than police shootings  like school choice and charter schools to save black children from the failing public school system; Adam Schiff who pushed the false Russian collusion delusion 24/7 against Trump and was infiltrated by a Chinese female spy Fang Fang, is now finding hawk feathers to demand that the U.S. go on the cyber offensive to deter cyberhacking; Don Lemon is on another full time rant claiming whites cannot see blacks as fully human (if a human trait is that we have the ability to move beyond instinct and be objective which he lacks maybe as to him he has something); the looters arrested in NYC in 2020 protesting Floyd’s death should be on their knees thanking Trump as NYC D.A.’s are dropping charges and not prosecution to focus on investigating the Trump Organization; WAPO once again shows its leftist rag colors in promoting to Karen Attiah, a black, to opinion columnist despite her tweet that blacks were only calling white women Karens and not seeking revenge (such unmitigated divisive hate!); Glenn Loury, the first black tenured professor at Harvard University has blasted the idea of reparations for blacks being disastrous to America; on the NYC Mayoral Election front, refreshing to see the likes of Al Sharpton blast Maya Wiley for her lack of diversity efforts and others expose her hypocrisy of sending her kids to private school and living in a neighborhood with private security force while supporting “Defund the Police”  (she’s making a six figure salary as an activist soaking “white guilt” for all its worth); as Biden was slammed for his list of hacking targets to get sanctions, leave it to the political cartoonist to portray the danger of hacking of items that didn’t make the list and making Obama like redlines in the sand the crossing of which Putin probably cannot resist: 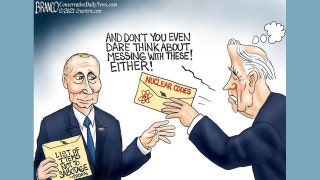 Chicago Gun Violence: Hey Jackass.com is alive and well to collect data to show that   through June 19, 2,021, gun violence involving mostly persons of color shooting mostly persons of color in Chicago is alive and well with 1772 persons shot of whom 303 have died.
As always, I hope you enjoy today’s holidays and observances, factoids of interest for this day in history, a recording musical link to “Wishing (Will Make It Easy)” by Glenn Miller and His Orchestra with vocals by Roy Eberle,  the fact that when you look rubedinous and a poem by Langston Hughes on the Detroit Race Riot on 1943, secure in the knowledge that if you want to send a gift for any memorable events like Father’s Day, college graduations, birthdays, weddings, or anniversaries, you know that the Alaskanpoet can provide you with a unique customized poem at a great price tailored to the event and the recipient. Please contact me for details on pricing.
1.  Summer Solstice—started at 8:32 p.m. PDT today as the official beginning of summer and the beginning of the longest day in the year.
2.  Father’s Day—celebrated on the third Sunday in June and created by Sonora Smart Dodd at the YMCA in Spokane, Washington in June 19, 1910 to honor her father William Smart, a Civil War Veteran who raised 6 children as a single parent.
3. 1939 Number 1 Song USA—the number 1 song in 1939 on this day    was “Wishing (Will Make It Easy)” by Glenn Miller and His Orchestra on a run of 4 weeks in that position. Here is a recording by Glenn Miller and His Orchestra with vocals by Roy Eberle: https://www.youtube.com/watch?v=IXTYhRjMbaU
4.  Word of the Day—the word of the day is “rubedinous” which means ruddy or healthy red complexion.
5.  Keeping It in the House--celebrating the birth on this day in 1942  of  Brian  Wilson, founder of the Beach Boys and the first pop artist to write, arrange, produce and perform his own material and best known for his creation of the “California Sound”. At 79 he still “Gets Around” and is performing.

On this day in:
a. 1943 the Detroit Race Riot broke out and when it had ended three days later after 6,000 troops had arrived to restore order, 34 had died, 25 of them blacks killed mostly by police and 433 had been injured, 75% of them black.
b. 1963 following the successful end of the Cuban Missile Crisis that brought the world closer to a nuclear war than ever, the Soviet Union and the United States reached an agreement to install the red hotline between Moscow and Washington, D.C. to defuse future potential armed conflicts.
c. 1975 to the terror of those who like to swim after the Sun when down in the ocean, the movie Jaws was released, starting the tradition of movie studios releasing the summer blockbusters.
d. 1982 the International Conference on the Holocaust and Genocide opened in Tel Aviv despite Turkey’s attempt to prevent it since it included discussion of the Armenian Genocide by Turkey.
e. 2003 the Wikimedia Foundation was founded in St. Petersburg, Florida by Jimmy Wales.
Reflections on the Detroit Race of 1943 raised by a poet: ““Looky here, America / What you done done / Let things drift / Until the riots come […] You tell me that hitler / Is a mighty bad man / I guess he took lessons from the ku klux klan […] I ask you this question / Cause I want to know / How long I got to fight / BOTH HITLER — AND JIM CROW.”  Langston Hughes “Beaumont to Detroit 1943"
Please enjoy the poems on events of interest on my twitter account below (if you like them, retweet, and follow me) and follow my blogs. Always good, incisive and entertaining poems on my blogs—click on the links below. Go to www.alaskanpoet.blogspot.com for Ridley’s Believe It Or Not—This Day in History,  poems to inspire, touch, emote, elate and enjoy and poems on breaking news items of importance or go to  Ridley's Believe It Or Not for just This Day in History.

© June 20, 2021 Michael P. Ridley aka The Alaskanpoet
Alaskanpoet for Hire, Poems to Admire
Poet Extraordinaire, Beyond Compare
A Unique Gift, All Recipients a Lasting Gift

Posted by Michael P. Ridley aka the Alaskanpoet at 12:26 AM