June 13, 2021 Ridley's Believe It Or Not Abused Women and Children Awareness Day

Standing: On a deaths per million population measure on a steady   but slowing climb to 1848 the U.S. ranks behind Peru (5641) the new number 1 which has had a quantum leap in deaths previously unmatched which may be a change in the method of reporting; Hungary the new number 2 has had a huge continuing surge in deaths with the increase now slowing down and improving slightly to  3.96% of its closed cases have died (3103), aping Hungary in terms of increase in deaths Bulgaria 2594),   Brazil (2273) which has been hit with a rapid rise in deaths and cases and passed us and Italy, Belgium (2155), (Italy (2103), Poland (1972) and the UK (1875) which had passed us despite leading world in testing and now has new deaths barely increasing), and Argentina (1866), and slightly better than Mexico (1767), Spain (1721),  France (1688), Portugal (1676), Romania (1665),  Chile (1593), Sweden (1431) that never closed its economy down like we did but has recently been experiencing a steady rise in deaths, Bolivia (1310) and Switzerland (1246).
Tests: We have now conducted 493,911,391 tests (now at 1,483,935/M) compared to number 2 now France at 1,354,836/M) as we are conducting more tests in number and on a per capital basis for all nations (other than those nations that contain small populations like Bahrain, Denmark, Israel, Malta, Singapore and UAE) other than the U.K. which remains as king of the mountain with respect to tests at 2,832,809/M.
CV Open Gate: Lost in the pronouncements by Biden and his lackeys   that there is no crisis of illegals surging across the border is that fact that COVID-19 is alive and well and spreading in the Northern Triangle and Mexico which has moved down to 11th  on my list of deaths from the pandemic having been passed by Argentina at 1767/M and the 3 countries in the Northern Triangle in terms of active cases and deaths per million are as follows even though the data may be suspect as underreported (regardless of number we need no more cases):

US Vaccinations: As of 6/12/21 308.1 million doses finally after decreasing  for several days falling to below 1 million to increase from 1.06 million per day to 1.14 million which means if the rate does not increase it will take us now down to some 5 months to have 75% of the population vaccinated which many believe is necessary to develop herd immunity. In California 40,236,460 total doses have been given (83.4% of doses received to exceed the U.S. average of 82.3%), but even with the pressure of a recall to be scheduled this fall which hopefully end Newsom’s term, California has moved  down from  24th  to 25th of the 50 states in terms of the percentage of doses administered as a percentage of doses delivered to the states and at 46.1% of its population fully vaccinated compared to the U.S. average of 43.1% has not moved from 20th among the 50 states.  A long way to go still to get herd immunity in terms of getting vaccines received into arms and the percentage of the population fully vaccinated compared to other states which means a great reason to recall this inept and hypocritical governor.
Non  CV News: As ratings for CNN continue to be in free fall due to its bias and fawning over Harris and Biden, a ray of hope for attempting to try journalistic integrity as a CNN panel criticizes Harris’ response to Holt’s interview with questions on her avoidance of going to the border; since Blues are prone to toss the transgender phobia card against Reds it is refreshing to see a transgender Caitlyn Jenner attack leftist Kimmy Kimmel as a transgenderphobiac for attacking her as a “Donald Trump with a wig”; in what police are initially investigating as a suicide, 45 year old Christopher Sign, the reporter who broke the news of the meeting of Bill Clinton with Lorretta Lynch on the tarmac at the Phoenix Sky Harbor Airport in 2016 as she was “investigating” Hillary Clinton’s private e-mail, has died; hold on to your wallets as the 2022 Florida Senate race between incumbent Marco Rubio and Blue challenger Rep. Val Demings is projected to be the most expensive Senate race in history; even though the life expectancy of the anti-Netanyahu coalition may be short-lived, Netanyahu is expected to have his 12 year reign as Israeli Prime Minister ended; 37 businesses in the Fells Point Area of Baltimore have written a scathing letter to the Mayor indicating they will be withholding taxes and permit fees if the city does not address the rampant crime in the area (Baltimore has resisted demands to defund the police and actually is proposing a $28 million increase put unfortunately no additional officers); the weekend was not even half over before Savannah, Chicago and Austin experienced mass shootings that left 2 dead and at least 30 wounded); the border is tidal wave of illegals is increasing overwhelming border agents while the left continues to ignore the crisis, falsely claims the border is closed and promotes the myth that we need  illegal, criminal, illiterate, or fodder to be trafficked by the cartels; Pelosi whose ability to use good judgment and claims Illan Omar is a valued member of Congress despite her anti-Semitic rants and refuses to despite Red demands to treat her like Rep. Green and remove her from her committee assignments; Minnesota Senate Reds are in a battle royal with the troika of the Blue led House, the teachers union and liberal governor Walz over the creation of education savings accounts and also vouchers that would enable parents to move their kids from public schools that they believe are failures to private schools with state funding following the student(at least charter schools receive funding from the   state); the outrage over imposing the teaching of Critical Race Theory continues to grow and now has 25 states opposing the practice; late in the first half of Denmark’s game against Finland in Euro 2020 Euro Championship, 29 year old Denmark’s midfielder Christian Eriksen’s heart stopped and in the words of the team doctor “he was gone” before resuscitated by a defibulator and taken to a hospital (after a 90 minute delay Finland ended up winning the game 1-0; parents watching the education of their kids being under attack by nonscientific lockdowns and online learning, Critical Race Theory, cancel culture and for want of a better term creeping Woke, leave in to the political cartoonist to show anger of the parents and the MIA response of Governor but the cartoon lacks under the desk joining a hiding Walz, House Speaker Melissa Hortman, and the president of the Minnesota Teachers union: 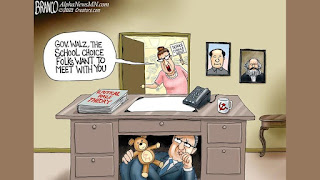 Chicago Gun Violence: Hey Jackass.com is back to show that   through June 12, 2,021, gun violence involving mostly persons of color shooting mostly persons of color in Chicago is alive and well with 1636 persons shot of whom 281 have died.
As always, I hope you enjoy today’s holidays and observances, factoids of interest for this day in history, a video musical link to “Long Road Home” by Lil Nas X feat. Billy Ray Cyrus, the fact that you like to rollick from time to time, and a quote from Michael Bassey Johnson on living with an abuser, secure in the knowledge that if you want to send a gift for any memorable events like Father’s Day, college graduations, birthdays, weddings, or anniversaries, you know that the Alaskanpoet can provide you with a unique customized poem at a great price tailored to the event and the recipient. Please contact me for details on pricing.
1.  Abused Women and Children Awareness Day—always celebrated on the second Sunday in June but clueless who created this observance or when it was first observed but creating awareness of abuse and the extent of it is a needed step to address the opinion as no man should ever abuse a woman and his children.
2.  World Softball Day—created by the International Software Federation on April 25, 2005 and celebrated on this day since 2005, the day being chosen to coincide with the day in 1991 softball was added to the Summer Olympic sports. The sport has growing popularity among girls and women and among older men who never played high school and college baseball.
3. 2019 Number 1 Song USA—the number 1 song in 2019 on this day was “Old Town Road” by Lil Nas X feat. Billy Ray Cyrus on a run of 19 weeks in that position to join 15 other songs reaching number 1 and 8 other acts achieved their first number 1 song either as the lead artist or featured guest.  Here is a video recording by Lil’ Nas X feat. Billy Ray Cyrus:  https://www.youtube.com/watch?v=w2Ov5jzm3j8
4.  Word of the Day—-the word for today is “rollick” which means frolic gaily which is a great way to chase the blues away.
5.  X’s and O’s With Wealth to Go--celebrating the birth on this day in 1926  of  noted comedian, television actor and panelist Paul Lynde who was a long time center square for the game show “Hollywood Squares from 1963 to 1981 and who poke fun with his snarky voice at his barely concealed homosexuality but who struggled with alcohol for many years until finally getting sober in the early 80’s but died too early in his sleep of a heart attack on January 10, 1982.
On this day in:
a. 1944 too late to interfere with D-Day or its preparations the first 4 V-1 rockets were launched toward London with only hitting in an inauspicious story of Hitler’s new vengeance weapon.
b. 1994 a jury in Anchorage, Alaska found Exxon and the captain Joseph Hazelwood of the Exxon Valdez guilty of recklessness after running onto the rocks after leaving Valdez, Alaska with a full tanker of crude oil, giving plaintiffs the right to seek $15 billion.
c. 1996 the Montana Freeman a right-wing group surrendered to the FBI after an 81 day standoff.
d. 2005 a jury founded Michael Jackson was found not guilty of sexually molesting a child in 1993.
e. 2018 Volkswagen was fine 1 € for programing its emission control software to activate the cars’ emission controls only during laboratory testing.
Reflections on living with abuse: “Putting up with an abusive person is like living with a pig in a pigsty and pretending not to care about the smell.”― Michael Bassey Johnson, The Book of Maxims, Poems and Anecdotes., noted inspirational writer and poet.
Please enjoy the poems on events of interest on my twitter   account below (if you like them, retweet, and follow me) and follow my blogs. Always good, incisive and entertaining poems on my blogs—click on the links below. Go to www.alaskanpoet.blogspot.com for Ridley’s Believe It Or Not—This Day in History,  poems to inspire, touch, emote, elate and enjoy and poems on breaking news items of importance or go to  Ridley's Believe It Or Not for just This Day in History.

© June 13, 2021 Michael P. Ridley aka The Alaskanpoet
Alaskanpoet for Hire, Poems to Admire
Poet Extraordinaire, Beyond Compare
A Unique Gift, All Recipients a Lasting Gift

Posted by Michael P. Ridley aka the Alaskanpoet at 5:04 PM