June 23, 2021 Ridley's Believe It Or Not International Widows Day

US Vaccinations: As of 6/22/21 319.2 million doses finally after a decrease    from 1.29 million per day to 1.04 million followed by a blip up to 1.05 million which means if the rate does not increase it will take us still some 4 months to miss Biden’s goal of having 75% of the population vaccinated by the 4th of July which many believe is necessary to develop herd immunity. In California 41,639,567 total doses have been given (85.5% of doses received to exceed the U.S. average of 84.1%), but even with the pressure of a recall to be scheduled this fall which hopefully end Newsom’s term, California has finally  moved up from 22nd   to 20th tied with Ohio of the 50 states in terms of the percentage of doses administered as a percentage of doses delivered to the states and at 48.4% of its population fully vaccinated compared to the U.S. average of 45.3% has  moved down from 18th  to 22nd among the 50 states.  A long way to go still to get herd immunity in terms of getting vaccines received into arms and the percentage of the population fully vaccinated compared to other states which means a great reason to recall this inept and hypocritical governor.
Non  CV News: In a wheels of justice move slowly but at least they move, Brian Andrews who had two prior DUI convictions was arrested on June 30, 2007 for a DUI in which he killed a husband and wife, was jailed for 2 days, posted bail in the amount of $10,000 and fled to Mexico where he hid out for 14 years before being arrested there and extradited to Florida where hopefully he will not have bail allowed to remain in jail until trial; our inept Immigration Czar after 90 days of avoiding the border like the plague that will interfere with her 25th goal has finally had the light bulb turned on that the border crisis is no laughing matter and she cannot chuckle her way out of it and will be visiting the border at El Paso this week (El Paso is light years away from the crisis in the Del Rio section and was chosen to do a Acosta like photo op of the Wall showing no illegals trying to come across); Biden and his politicized side kick Garland have announced a war on “rogue gun dealers” to complement his war on guns, seeking to ban “assault rifles” aka any semiautomatic rifle with a magazine and high capacity magazines, increasing background checks and expanding community policing (the two evidently are completely dismissing the defund the police movement, the blatant city councils’ war on police and liberal D.A.’s and judges who are too quick to put criminals back out on the streets); 39 year old Brittany Spears is in court trying to prove the her father, her appointed conservatorship does not know best and wants her life back free of a conservatorship and if the court does not agree that she be allowed to chose (sad state if affairs); Whitehouse caught with his hands in the lack of diversity jar over membership in Bailey’s Beach Club has another jar with his hand caught it, a sailing club also in Rhode Island (his hypocrisy of lecturing mere mortals is outrageous-- more so than his membership in a non-diverse club); John McAfee, the founder of cyber security software McAfee, has been found dead in his Barcelona jail cell, hours after his extradition to the U.S. was approved by a Spanish court (too early for cause of death yet); 1.7 million signatures for Newsom’s recall have been verified so the recall election is now a sure thing; 2 term Blue Rochester Mayor Lovely Warren has lost in the Blue primary which should come as no surprise as she had been indicted for campaign finance law violations and married to a jailed drug trafficker to Blue councilman Malik Evans (sadly this city in heavily Blue so Rochester will face most likely more or the same Blue ineptness with a different face; with crime going through the roof in Blue run cities, leave it to the political cartoonist to reveal the effects of  their ideas on how the Blues intend to fight the rise in crime: 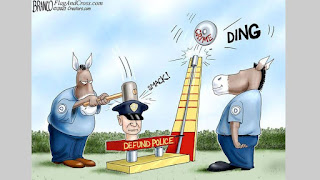 Chicago Gun Violence: Hey Jackass.com is alive and well to collect data to show that through June 20, 2,021, gun violence involving mostly persons of color shooting mostly persons of color in Chicago is alive and well with 1806 persons shot of whom 316 have died.
As always, I hope you enjoy today’s holidays and observances, factoids of interest for this day in history, a recording musical link to “Sleepy Lagoon” by Harry James and His Orchestra,  the fact that you live in a neighborhood not subjection to ruction and a quote by Donna Lopiano on male transgenders competing in women’s sports, secure in the knowledge that if you want to send a gift for any memorable events like Fourth of July, college graduations, birthdays, weddings, or anniversaries, you know that the Alaskanpoet can provide you with a unique customized poem at a great price tailored to the event and the recipient. Please contact me for details on pricing.                                       1.  International Widows Day—created by the Loomba Foundation in 2005  to call attention to the poverty and discrimination some 115 million widows of the over 250 million widows today face each and every day, with the additional struggle of supporting children.
2. UN Public Service Day--created by the General Assembly in 2003 to honor the contribution of public servants to society and its economy.
3. 1942 Number 1 Song USA—the number 1 song in 1942 on this day   was “Sleepy Lagoon” by Harry James and his Orchestra to join 8 other songs in the number 1 position. Here is a recording of “Sleepy Lagoon” by Harry James and his Orchestra: https://www.youtube.com/watch?v=mtSawvkJFzU
4.  Word of the Day—the word of the day is “ruction” which means a  disturbance  or uproar which we have had to witness all too often in the protests over deaths that turned into riots.
5.  Impossible to Body Check Drugs and Alcohol or the Big E--celebrating the birth on this day in 1982 of professional hockey player for the New York Rangers who was known as the “Boogeyman” and “The Mountie” as one of the most feared enforcers in the game and who died from an accidental overdose of drugs and alcohol from recovering from a concussion on May 13, 2011 at the age of 28. An autopsy showed stages of traumatic encephalopathy from prior brain concussion like collisions.
On this day in:
a.  1942 in a real oops moment the pilot of Germany’s latest fighter, the Focke-Wulfe 190 in a wrong way Corrigan type move, landed by mistake at RAF Pembrey in Wales as was captured intact which spared English from a commando raid on a German airfield in France to try to capture one and fly it back to England.
b. 1969 IBM announced that it would effective January 1970 price its hardware separately from its software giving a great push to the creation of the software industry.
c. 1972 Title IX of the United States Civil Rights Act of 1964 was amended to prevent sexual discrimination by any institution receiving federal funds which resulting in
an explosion of women and girls entering sports, whose progress has been put in peril over the idiocy of biologic males competing in sporting competition for biologic females.                           d.  2016 the United Kingdom in a referendum voted 52% to 48% to leave the European Union.
e. 2018 12 young male soccer players and their coach were trapped in an underground cave which flooded due to tropical storms that flooded the area that spawned an 18 day rescue attempt that attracted worldwide attention and prayers and cost the life of one diver engaged in the rescue attempt before all 12 players and coach were rescued.                  Reflections on Title IX and the danger from Transgender males competing as females: I’m not saying transgender girls are going to take over women’s sports. I’m saying that the law protects girls and women, and they shouldn’t have to compete against someone who has an immutable testosterone-based advantage.” Donna Lopiano, Title IX advocate
Please enjoy the poems on events of interest on my twitter account below (if you like them, retweet, and follow me) and follow my blogs. Always good, incisive and entertaining poems on my blogs—click on the links below. Go to www.alaskanpoet.blogspot.com for Ridley’s Believe It Or Not—This Day in History,  poems to inspire, touch, emote, elate and enjoy and poems on breaking news items of importance or go to  Ridley's Believe It Or Not for just This Day in History.

Posted by Michael P. Ridley aka the Alaskanpoet at 11:43 PM