Standing: On a deaths per million population measure on a steady   but slow climb to 1860 the U.S. ranks behind Peru (5732) the new number 1 which has had a quantum leap in deaths previously unmatched which was a change in the classification to give Peru the a new method of reporting to have a fatality rate of 9.38% of total cases now; Hungary the new number 2 has had a huge continuing surge in deaths with the increase now slowing down and improving slightly to  3.91% of its closed cases have died (3111), aping Hungary in terms of increase in deaths Bulgaria (2614),   Brazil (2396) which has been hit with a rapid rise in deaths and cases and passed us and Italy, Belgium (2162), Italy (2111), Argentina (2024), Poland (1983), and the UK (1877) which had passed us despite leading world in testing and now has new deaths barely increasing),  and slightly better than Mexico (1785), Romania (1740), Spain (1727),  France (1696),  Portugal (1680),  Chile (1675), Sweden (1435) that never closed its economy down like we did, Bolivia (1399) and Switzerland (1248).
Tests: We have now conducted 503,469,781 tests (now at 1,512,316/M) compared to number 2 now France at 1,414,448/M) as we are conducting more tests in number and on a per capital basis for all nations (other than those nations that contain small populations like Bahrain, Denmark, Israel, Malta, Singapore and UAE) other than the U.K. which remains as king of the mountain with respect to tests at 3,035,948/M.
CV Open Gate: Lost in the pronouncements by Biden and his lackeys   that there is no crisis of illegals surging across the border is that fact that COVID-19 is alive and well and spreading in the Northern Triangle and Mexico which been passed by Argentina to move down to 11th  on my list of deaths from the pandemic  at 1785/M with a fatality rate of 10.48% of closed cases and the 3 countries in the Northern Triangle in terms of active cases and deaths per million are as follows even though the data may be suspect as underreported (regardless of number we need no more cases):
Guatemala:  Active Cases:  20,374  Deaths/M  496
Honduras:    Active Cases: 160,403  Deaths/M  688
El Salvador:  Active Cases:    3,514  Deaths/M  363
US Vaccinations: As of 6/27/21 323.3 million doses with after 4 days of decreasing doses finally increasing from .748 million per day to .803 million per day which means if the rate does not increase it will take now take us  some 6 months to miss Biden’s goal of having 75% of the population vaccinated which many believe is necessary to develop herd immunity ( other than Flip Flop Fauci who is suggesting 90%). In California 42,312,077 total doses have been given (86.3% of doses received to exceed the U.S. average of 84.8%), but even with the pressure of a recall to be scheduled this fall which hopefully end Newsom’s term, California remains alone in 21st  of the 50 states in terms of the percentage of doses administered as a percentage of doses delivered to the states and at 49.4% of its population fully vaccinated compared to the U.S. average of 46.1% has  moved down 18th to 23rd  among the 50 states.  A long way to go still to get herd immunity in terms of getting vaccines received into arms and the percentage of the population fully vaccinated compared to other states which means a great reason to recall this inept and hypocritical governor.
Non  CV News: In Miami the 9th body has been recovered with 156 still missing and if in the ruble rapidly running out of survival time as concerns rising the e North Tower may be in danger of aping the South Tower (as a precautionary move Miami has ordered a safety audit of all resident structures higher that 5 stories and the Army Corps of Engineers is examining the North Tower); not as bad as the Black Power Salute in the 1968 Mexico City Olympics but close as Gwen Berry, a black female athlete who won the Bronze Medal in the hammer throw at the Olympic Trials turned her back on the flag while on the podium and covered her head with a “Activist Athlete” T-shirt; 30 miles out from the finish line of Stage 1 of the Tours de France, a female spectator holding a large cardboard sign caused a massive crash of riders, seriously injuring several riders, and fled from the scene as French police are now looking for her ( the event has to be one of the few where spectators are not kept back and pose a safety hazard to themselves and the riders); Biden must not remember what he believes in as after turning thumbs down to the dismay of senators who were working tirelessly to craft an infrastructure bill the compromise if it did not include his massive social spending, he reversed and said he would sign it (another sign of growing dementia?); never underestimate the ability of the Cancel Culture Wokes to find systematic racism in every nook and cranny of our society with the National Archives Commission reporting that the Rotunda in the Capitol which displays our founding documents is structurally racist as the Founding Fathers are portrayed too positively (when will “racism” be so commonly found in the left’s warped minds that no one pays any attention to their racist rants); the Texas Supreme Court dismissed law suits filed by the estates of the survivors of those gunned down in 2017 at the Sutherland Church because the gun shop followed the law and conducted a background check which did not reveal that the shooter while in the Air Force had been court martialed for assault on his wife and child (law suits against the Air Force for its negligence in failing to report are still ongoing); as murders and shootings in our large cities are skyrocketing a news item that will shake your faith in the criminal justice system as Ira Grayson after being released on “supervised probation” awaiting a hearing on whether he should be returned to prison, shot and killed a father in front of his kids on Father’s Day and is now in jail without bail for murder, illegal drugs and illegal firearm possession: 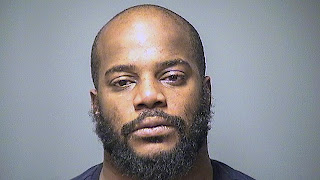 After De Blasio was seen promoting tourism in NYC, a tourist walking with his family in broad daylight in Times Square was shot by 2 Hispanic males that remain at large; the developers that built the Champlain Towers are being accused of shady practices in its construction and operation but the principals involve are long since dead; in addition to the expanding controversy over teaching CRT schools, in Minneapolis a controversy has arisen over the Lakewood School District reversing its ban of political signs in classrooms and was excoriated by Novalee, a 9 year old, for not removing a Black Lives Matter sign from her classroom which supposedly members of the School Board Created; leave it to the political cartoonist to portray the heavy hand of the government in quashing dissent on this issue: 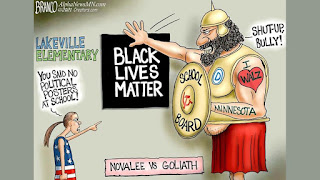 Chicago Gun Violence: Hey Jackass.com is alive and well to collect data to show that through June 26, 2,021, gun violence involving mostly persons of color shooting mostly persons of color in Chicago is alive and well with 1872 persons shot of whom 320 have died.
As always, I hope you enjoy today’s holidays and observances, factoids of interest for this day in history, a recording musical link to “The Gypsy” by The Ink Spots, the fact that you are rarely rumbustious in your behavior and a quote by Danielle Bernock on PTSD, secure in the knowledge that if you want to send a gift for any memorable events like Fourth of July, college graduations, birthdays, weddings, or anniversaries, you know that the Alaskanpoet can provide you with a unique customized poem at a great price tailored to the event and the recipient. Please contact me for details on pricing.                  1.  National PTSD Day--created by the U.S. Senate in 2010 to promote awareness of post traumatic stress disorder which is not confined only to those experiencing combat in the military but affects a large percentage of the general public with women twice as likely as men to be affected.
2. Helen Keller Day—created by the mayor of Newark, New Jersey Leo P. Carlin on March 23, 1960 and celebrated on her birthday to honor the accomplishments of Helen Keller to overcome her challenges of being deaf and blind and becoming the first deafblind person to achieve a bachelor of arts degree enroute to becoming an author, lecturer and activist.
3. 1946 Number 1 Song USA—the number 1 song in 1946 on this day on a run of 10 weeks not continuous in the position was “The Gypsy” by the Ink Spots to join 14 other songs in the number 1 position. Here is a recording of “The Gypsy” by The Ink Spots:https://www.youtube.com/watch?v=vG6g5CkyWAo
4.  Word of the Day—the word of the day is “rumbustious” which means boisterous which describes behavior often found in bars and taverns after too many libations.                     5.  All Ears--celebrating the birth on this day in 1930 of Ross Perot,  a  Texas businessman who founded Electronic Data Systems and made millions from its sale and as a 3rd Party candidate received almost 20% of the vote in the election where he ran against George H.W. Bush and Bill Clinton and probably resulted in Clinton becoming president. After saying in the campaign he would be here for a long time he passed at age 89 on July 9, 2019.

On this day in:
a. 1941 Romania launched its deadliest pogrom against Jews in the city of Iasi, killing at least 13,266 Jews.
b. 1950 the United States decided to send troops to Korea to stop the invasion by North Korea of South Korea.
c. 1974 President Richard Nixon visited the Soviet Union.
d.  1994 members of the Aum Shinrikyo cult in a warmup to the sarin nerve gas attack in the Tokyo Subway 9 months later released Sarin nerve gas in Matsumoto, Japan, killing 8 and injuring over 500.
e. 2007 Tony Blair after serving as the British Prime Minister for 10 years resigned.               Reflections on the PTSD: “Trauma is personal. It does not disappear if it is not validated. When it is ignored or invalidated the silent screams continue internally heard only by the one held captive. When someone enters the pain and hears the screams healing can begin.”―Danielle Bernock, Emerging With Wings: A True Story of Lies, Pain,And the LOVE that Heals
Please enjoy the poems on events of interest on my twitter account below (if you like them, retweet, and follow me) and follow my blogs. Always good, incisive and entertaining poems on my blogs—click on the links below. Go to www.alaskanpoet.blogspot.com for Ridley’s Believe It Or Not—This Day in History,  poems to inspire, touch, emote, elate and enjoy and poems on breaking news items of importance or go to  Ridley's Believe It Or Not for just This Day in History.

© June 27, 2021 Michael P. Ridley aka The Alaskanpoet
Alaskanpoet for Hire, Poems to Admire
Poet Extraordinaire, Beyond Compare
A Unique Gift, All Recipients a Lasting Gift

Posted by Michael P. Ridley aka the Alaskanpoet at 7:00 PM