Standing: On a deaths per million population measure on a steady   but slow climb to 1858 the U.S. ranks behind Peru (5724) the new number 1 which has had a quantum leap in deaths previously unmatched which was a change in the classification to give Peru the a new method of reporting to have a fatality rate of 9.38% of total cases now; Hungary the new number 2 has had a huge continuing surge in deaths with the increase now slowing down and improving slightly to  3.91% of its closed cases have died (3110), aping Hungary in terms of increase in deaths Bulgaria (2613),   Brazil (2379 which has been hit with a rapid rise in deaths and cases and passed us and Italy, Belgium (2161), (Italy (2110), Argentina (2005), Poland (1982), and the UK (1877) which had passed us despite leading world in testing and now has new deaths barely increasing),  and slightly better than Mexico (1782), Spain (1727), Romania (1715), France (1695),  Portugal (1680),  Chile (1650), Sweden (1435) that never closed its economy down like we did, Bolivia (1388) and Switzerland (1248).                 Tests: We have now conducted 502,180,123 tests (now at 1,508,490/M) compared to number 2 now France at 1,402,505/M) as we are conducting more tests in number and on a per capital basis for all nations (other than those nations that contain small populations like Bahrain, Denmark, Israel, Malta, Singapore and UAE) other than the U.K. which remains as king of the mountain with respect to tests at 3,018,441/M.
CV Open Gate: Lost in the pronouncements by Biden and his lackeys   that there is no crisis of illegals surging across the border is that fact that COVID-19 is alive and well and spreading in the Northern Triangle and Mexico which been passed by Argentina to move down to 11th  on my list of deaths from the pandemic  at 1782/M with a fatality rate of 10.48% of closed cases and the 3 countries in the Northern Triangle in terms of active cases and deaths per million are as follows even though the data may be suspect as underreported (regardless of number we need no more cases):
Guatemala:  Active Cases:  19,168  Deaths/M  488
Honduras:    Active Cases: 157,752  Deaths/M  684
El Salvador:  Active Cases:    3,525  Deaths/M  361
US Vaccinations: As of 6/24/21 320.7 million doses finally after a decreases from to 1.04 million followed to a to 1.05 million a major decrease to .816 million per day which means if the rate does not increase it will take now take us  some 6 months to miss Biden’s goal of having 75% of the population vaccinated by the 4th of July which many believe is necessary to develop herd immunity. In California 41,839,888 total doses have been given (85.7% of doses received to exceed the U.S. average of 84.6%), but even with the pressure of a recall to be scheduled this fall which hopefully end Newsom’s term, California has finally  moved down from 20th tied with Ohio to 22nd tied with Ohio of the 50 states in terms of the percentage of doses administered as a percentage of doses delivered to the states and at 48.6% of its population fully vaccinated compared to the U.S. average of 45.6% has  moved up from 22nd to 17th  among the 50 states.  A long way to go still to get herd immunity in terms of getting vaccines received into arms and the percentage of the population fully vaccinated compared to other states which means a great reason to recall this inept and hypocritical governor.
Non  CV News: In Miami a 12 story condominium built in 1981 that was undergoing recertification process had half of the structure pancake with so far 3 dead, 102 rescued but sadly and with prayers in full force 99 missing; in a great commercial for it being a leader in crash safety, a Tesla 3 plunged in a 100 foot drop off of Highway 18 on the road to Lake Arrowhead into a grove of trees and all 4 occupants survived with minor cuts and bruises; Britany Spears in court speaking for the first time on the issue is arguing her conservatorship must be ended, wants to get married and wants her IUD removed so she can have children (if someone so rich and famous can be stuck it what may be an overreaching and abusive conservatorship by a father, what chance do mere mortals have when faced with the same dilemma?);  Cece Tefler, a transgender woman who won the 2019 NCAA Division II 400 meters hurdles championship, has been ruled ineligible to compete in the Olympic Trials as her testosterone is above 5 nanomoles per liter; the BLM narrative that all cops are guilty of systematic racism and therefore a stopped black can attack them with impunity was in full force and effect in Aurora, Illinois when a cop stopped a car for rolling through a stop sign to have the 2 females attack him after he started chasing the fleeing male driver (in our yo-yo criminal justice system, bail was set at $50,000 for females and $75,000 for male which means they will likely soon be back on the street); Boris Johnson was not in the room when Biden was wimping out with Putin, but our fears that Russian will be emboldened may be bearing fruit as Russia fired warning shots and dropped a bomb in the path of a UK destroyer, a NATO member, claiming it was in Russian territorial waters in the Black Sea; the leftist leaning 9th Circuit moved somewhat to the middle by the Trump Presidency will now consider a California District Court’s overturning of California’s ban on ten shot or more magazines;  Biden appears on whispering about his infrastructure bill whispering and going off the mental stability charts;  as parents in a growing trend are fighting back against teaching of CRT in schools leave it to the political cartoonist to reveal what teaching it means in school: 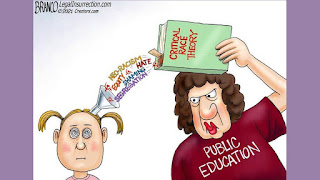 Chicago Gun Violence: Hey Jackass.com is alive and well to collect data to show that through June 23, 2,021, gun violence involving mostly persons of color shooting mostly persons of color in Chicago is alive and well with 1825 persons shot of whom 316 have died.
As always, I hope you enjoy today’s holidays and observances, factoids of interest for this day in history, a recording musical link to “Taking a Chance on Love” by Benny Goodman and His Orchestra with vocals by Helen Forest,  the fact that you rarely are accused of speaking in a ruderary manner and a quote by President Ronald Reagan on UFO’s, secure in the knowledge that if you want to send a gift for any memorable events like Fourth of July, college graduations, birthdays, weddings, or anniversaries, you know that the Alaskanpoet can provide you with a unique customized poem at a great price tailored to the event and the recipient. Please contact me for details on pricing.               1.  World UFO Day-- created by the World UFO Organization to alert us to the fact that we may not be alone and promote the fact that UFOs may exist.
2. National Bomb Pop Day—during the Cold War and the  always  present threat of nuclear annihilation in 1955 James Merritt with the aid of D.S. Abernathy came up with the idea of the Bomb Pop, a blue, red and white popsicle to cool the world of tensions which lasted well past the demise of Merritt’s company which sold the Bomb Pop.
3. 1943 Number 1 Song USA—the number 1 song in 1943 on this day was “Taking a Chance on Love” by Benny Goodman and his Orchestra with Helen Forest on vocals to join 11 other songs in the number 1 position. Here is a recording of “Taking a Chance of Love” by Benny Goodman and his Orchestra with Helen Forest on vocals: https://www.youtube.com/watch?v=E65N6d_vBVw
4.  Word of the Day—-the word of the day is “ruderary” which means    of  or relating to rubbish which if a Red you believe is what you normally hear on the MSM.
5.   Challenging Space Is Not a Piece of Cake--celebrating the birth of  Ellison Onizuka on this day in 1946 who became the first Japanese American to go into space on the Space Shuttle Discovery on January 24, 1985 but then on his return to space on January 26, 1986 as a mission specialist on the Space Shuttle Challenger died along with all his crew members when it exploded shortly after takeoff.

On this day in:
a.  1948 the Soviet Union breaching its existing agreements closed overland traffic from West Germany into West Berlin which prompted the Berlin Airlift which ultimately broke the back of the Soviet’s efforts.
b. 1957 SCOTUS ruled in the case of Roth v. United States that obscenity was not protected by the First Amendment without to the bane of future court decisions giving us a bright line test of what obscenity was.
c. 1975 Eastern Airlines Flight 66 on approach to JFK was hit by a     severe wind shear and crashed, killing all 124 aboard which led to decades of research on the phenomena of downbursts and microbursts and their effect on aircraft.
d.  1982 British Airways Flight enroute Perth from Kuala Lumpur ran through a volcanic ash cloud which shut down all of its 747’s engines forcing the plane to try to glide to an emergency landing in Jakarta some 100 miles away or make an emergency ditch in the ocean; at the last moment before the plane would have to head to the ocean, the engines were restarted and the plane with all its visibly shaken passengers and crew landed safely.
e. 2013 former Italian Prime Minister Silvio Berlusconi was found guilty of having sex with an underage prostitute and abusing his power to cover up the charge and was sentenced to 7 years in prison which he appealed and had the conviction reversed.                           Reflections on UFO’s and their possible impact: “Perhaps we need some outside, universal threat to make us recognize this common bond. I occasionally think how quickly our differences worldwide would vanish if we were facing an alien threat from outside this world.” President Ronald Reagan
Please enjoy the poems on events of interest on my twitter account below (if you like them, retweet, and follow me) and follow my blogs. Always good, incisive and entertaining poems on my blogs—click on the links below. Go to www.alaskanpoet.blogspot.com for Ridley’s Believe It Or Not—This Day in History,  poems to inspire, touch, emote, elate and enjoy and poems on breaking news items of importance or go to  Ridley's Believe It Or Not for just This Day in History.

© June 24, 2021 Michael P. Ridley aka The Alaskanpoet
Alaskanpoet for Hire, Poems to Admire
Poet Extraordinaire, Beyond Compare
A Unique Gift, All Recipients a Lasting Gift