June 22, 2021 Ridley's Believe It Or Not World Rainforest Day

Standing: On a deaths per million population measure on a steady   but slow climb to 1856 the U.S. ranks behind Peru (5713) the new number 1 which has had a quantum leap in deaths previously unmatched which was a change in the classification to give Peru the a new method of reporting to have a fatality rate of 9.39% of total cases now; Hungary the new number 2 has had a huge continuing surge in deaths with the increase now slowing down and improving slightly to  3.91% of its closed cases have died (3109), aping Hungary in terms of increase in deaths Bulgaria 2611),   Brazil (2359 which has been hit with a rapid rise in deaths and cases and passed us and Italy, Belgium (2160), (Italy (2109), Poland (1980), Argentina (1980) and the UK (1876) which had passed us despite leading world in testing and now has new deaths barely increasing),  and slightly better than Mexico (1777), Spain (1726),  France (1694), Romania (1699),  Portugal (1679),  Chile (1644), Sweden (1434) that never closed its economy down like we did, Bolivia (1373) and Switzerland (1248).
Tests: We have now conducted 500,790,852 tests (now at 1,504,364/M) compared to number 2 now France at 1,396,887/M) as we are conducting more tests in number and on a per capital basis for all nations (other than those nations that contain small populations like Bahrain, Denmark, Israel, Malta, Singapore and UAE) other than the U.K. which remains as king of the mountain with respect to tests at 2,987,491/M.
CV Open Gate: Lost in the pronouncements by Biden and his lackeys   that there is no crisis of illegals surging across the border is that fact that COVID-19 is alive and well and spreading in the Northern Triangle and Mexico which been passed by Argentina to move down to 11th  on my list of deaths from the pandemic  at 1777/M with a fatality rate of 10.48% of closed cases and the 3 countries in the Northern Triangle in terms of active cases and deaths per million are as follows even though the data may be suspect as underreported (regardless of number we need no more cases):

US Vaccinations: As of 6/22/21 318.6 million doses finally after increasing slightly for several days to decrease from 1.29 million per day to 1.04 million which means if the rate does not increase it will take us still some 4 months to miss Biden’s goal of having 75% of the population vaccinated by the 4th of July which many believe is necessary to develop herd immunity. In California 41,584,951 total doses have been given (85.6% of doses received to exceed the U.S. average of 84.1%), but even with the pressure of a recall to be scheduled this fall which hopefully end Newsom’s term, California has finally  moved up from 22nd of the 50 states in terms of the percentage of doses administered as a percentage of doses delivered to the states and at 48.3% of its population fully vaccinated compared to the U.S. average of 45.2% has not moved from 18th among the 50 states.  A long way to go still to get herd immunity in terms of getting vaccines received into arms and the percentage of the population fully vaccinated compared to other states which means a great reason to recall this inept and hypocritical governor.
Non  CV News: The Randolph, New Jersey School Board after bowing to the cancel culture movement that is killing this country voted to remove the names of holidays from the school calendar to replace them with “Days Off” which produced a hurricane of outrage from parents, after parting shots to parents protesting as “right wing fanatics” reversed itself 8-1 and holiday names will be restored (the lone dissenter’s political career should end next election and the fellow school board members who originally voted for this inanity should join him or her); after the Gay Pride Event in Seattle announced it would charge “reparations” to whites to attend which the city’s Human Rights Commission actually found no discrimination, 2 members of the event committee apologized for “reverse discrimination” only to be attacked and forced to apologize (the organizers of this event seem oblivious to the inanity of their own discrimination); after the NFL’s first active gay player came out, Joyless Behar in a typical clueless moment on The View cracked what if made by a Red would be slammed as homophobic that she didn’t understand “penetration in the end zone”; maybe Biden has some spine as the U.S. seized 36 Iranian social media sites for disinformation and Iran’s new ruler Raisi already being condemned for human rights violations flatly rejected any talks with U.S. on nuclear deal discussions restart as long as sanctions remain; for Biden in Iowa the rose still is in bloom with 89% of Blues who approve his policies as opposed to 6% of Reds but among all voters his honeymoon may have ended as 52% disapprove; bipartisanship may be an endangered species on most issues but evidently not immigration as a bipartisan troika of legislators Cornyn, Gonzales and Cuellar are slamming Biden’s border policies and demanding Harris and Biden come to the border to witness firsthand the chaos; the chickens are coming home to roost over the Blue’s idiocy of locking down Washington for weeks with 26,000 members of the National Guard as the Secretary of the Army is claiming that unless the National Guard is reimbursed $521 million for its costs it will be forced to cut back on training (the number and duration was sheer 1984 overkill); as crime continues to spiral out of control and far too many charged are too quickly released, it looks like Biden is still sticking to his “no cash bail” campaign promise; Portland, racked by riots and resigning police, now prohibits officers from non-safety related traffic stops and requires officers to inform those stopped of their right to not consent to having their vehicle searched (wonder how many felons that would otherwise be caught in a routine traffic stop will now continue to go free and raise deadly havoc); as record numbers of illegals flood our border while the Biden Administration is MIA on trying to secure it, leave it to the political cartoonist to point out our shortfalls in addressing this very dangerous crisis that seems to worsen each day: 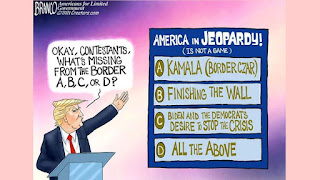 Chicago Gun Violence: Hey Jackass.com is alive and well to collect data to show that through June 20, 2,021, gun violence involving mostly persons of color shooting mostly persons of color in Chicago is alive and well with 1791 persons shot of whom 315 have died.
As always, I hope you enjoy today’s holidays and observances, factoids of interest for this day in history, a recording musical link to “Daddy” by Swing and Sway with Sammy Kaye and the Kaye Choir,  the fact that you are not cursed with the need of ructation to embarrass yourself  and a quote by Michael Somare on the importance or rainforests, secure in the knowledge that if you want to send a gift for any memorable events like Fourth of July, college graduations, birthdays, weddings, or anniversaries, you know that the Alaskanpoet can provide you with a unique customized poem at a great price tailored to the event and the recipient. Please contact me for details on pricing.             1.  National HVAC Tech Day—created by the ARS Rescue Rooter in 2016 to honor the work of the HVAC technicians that keep us warm in the winter and cool in the summer and well ventilated all year round.
2.  World Rainforest Day—created by the Rainforest Partnership in 2017 to create awareness of the critical importance of rainforests to animal habitat and to the elimination of carbon dioxide in our atmosphere and to promote efforts to preserve this vital resource.              3. 1941 Number 1 Song USA—the number 1 song in 1941 on this day   was “Daddy” by Swing and Sway with Sammy Kaye and the Kaye Choir on a run of 1 week in that position. Here is a recording of “Daddy” by Swing and Sway with Sammy Kaye and the Kaye Choir: https://www.youtube.com/watch?v=5xY2vd-mNSU Classic song of imagined gold diggers.
4.  Word of the Day—the word of the day is “ructation” which means the act of belching which will not endear you to your host in social settings.
5.  Holding On--celebrating the birth on this day in 1933 of Diane Feinstein, a Stanford graduate and the oldest senator at 88 years old and the second oldest member of Congress being 9 days junior of misnamed 25 term Alaska Congressman Dan Young.                          On this day in:
a. 1870 the Department of Justice was created by Congress.
b. 1944 President Roosevelt signed into law the Serviceman’s Readjustment Act, more commonly known to the millions who benefited from it as the G.I. Bill.
c. 1948 in a better late than never moment, King George VI formally relinquished his title as Emperor of India some 6 months after England had granted independence to the country.
d.  1969 in a classic warning of the dangers of pollution to our waterways the Cuyahoga River in Cleveland caught fire assisting the passage of the Clean Water Act and the creation of the Environmental Protection Agency.
e. 1990 Checkpoint Charlie on the now erased border of West and East Berlin was dismantled.
Reflections on rainforests: “The answer is simple. If we lose the world's forests, we lose the fight against climate change. Rainforests are our Earth's greatest utility - our planet's lungs, thermostat and air-conditioning system.” Michael Somare, the first Prime Minister of Papua New Guinea after its independence.
Please enjoy the poems on events of interest on my twitter account below (if you like them, retweet, and follow me) and follow my blogs. Always good, incisive and entertaining poems on my blogs—click on the links below. Go to www.alaskanpoet.blogspot.com for Ridley’s Believe It Or Not—This Day in History,  poems to inspire, touch, emote, elate and enjoy and poems on breaking news items of importance or go to  Ridley's Believe It Or Not for just This Day in History.

Posted by Michael P. Ridley aka the Alaskanpoet at 12:39 PM