October 29, 2021 Ridley's Believe It Or Not International Internet Day

RIDLEY’S BELIEVE IT OR NOT October 29, 2021
CV World Cases: The CV pandemic across the planet continues on an increasing basis with cases now over 246 million at 246,592,349 cases,  18,192,948 of which are active, 228,399,401  closed with 223,398,263 recoveries (97.81%), and cracking the 5,000,000 barrier 5,001,138 deaths (2.19% )to continue the low trend of increased cases with increased recovery percentages and decreased death percentages with some plateaus, dips, and rises.
CV USA Cases: Total cases now over 46 million at 46,693,879 with 9,362,900 active cases of which 12,966 are serious or critical, (8,599 on 3/25/2021) (back to steady decreases despite the  Delta variable to .138 % of active cases and to increase the reduction from the 29,271 peak on 12/31/2020 to 16,305, 37,330,979 closures with 763,894 deaths (2.05%) and with 36,567,085 recoveries (97.95%). Our death rate percentage is .14% lower than the world’s death rate.
Standing: On a deaths per million population measure on a steady   but slow climb to 2290 the U.S. ranks behind Peru (5961) the new number 1 which has had a quantum leap in deaths previously unmatched which was a change in the classification to give Peru the a new method of reporting to have a fatality rate of 9.26% of total cases now; Bulgaria the new number 2 (3488), Hungary (3192) just passed by Bulgaria, Brazil (2830) which has been hit with a rapid rise in deaths and cases and passed us and Italy, Argentina (2534),  Columbia newly added to the list  (2465), and  Romania (2240),  and slightly better than Belgium (2228), Mexico (2200), Italy (2188), UK (2054),  Poland (2034), Chile (1960),  Spain (1868),  Ecuador newly added to list (1831),  France (1797), Portugal (1787), Bolivia (1591),  Sweden (1472) that never closed its economy down like we did, and Switzerland (1287).
Tests: No need to tally tests as testing programs are functioning well.
CV Open Gate: Lost in the pronouncements by Biden and his lackeys  that there is no crisis of illegals surging across the border is that fact that COVID-19 is alive and well and spreading in the Northern Triangle and Mexico which is  10th  on my list of deaths from the pandemic  at 2200/M with 385,347 active cases and a fatality rate of 8.34% of closed cases and the 3 countries in the Northern Triangle in terms of active cases and deaths per million are as follows even though the data may be suspect as underreported (regardless of number we need no more cases):
Guatemala:  Active Cases:    6,588 Deaths/M  813
Honduras:    Active Cases: 249,161 Deaths/M 1012
El Salvador:  Active cases:   14,829 Deaths/M  553
US Vaccinations: As of 10/29/2021 417.8 million doses,  1.09 million per day (down to 2 months for 75% of population vaccinated) and in California 135,122  per day  (which means if the rate does not increase it will take us now only  4 weeks to have 75% of the population of California vaccinated which many believe is necessary to develop herd immunity (other than Flip Flop Fauci who may believe that 90% is required).  In California 53,719,846 total doses have been given (86.1%  of doses received to exceed the U.S. average of 81.9%), California has moved from 19th to 4th  tied with New York  of the 50 states in terms of the percentage of doses administered as a percentage of doses delivered to the states and at 61.1% of its population fully vaccinated compared to the U.S. average of 57.6% and has moved from 1st to 15th  in terms of getting vaccines received into arms and the percentage of the population fully vaccinated compared to other states.
Non  CV News: On the vaccine mandate front, the FDA has just approved on an emergency basis the Pfizer vaccine for children 5 to 11 (look to more outrage among parents with young kids now facing vaccine mandates to be able to attend public schools); GOP mayoral candidate Curtis Sliwa enroute to a radio interview was hit by a cab but still able to appear and complete the interview (déjà vu of Teddy Roosevelt on the Bull Moose being shot and still delivering a campaign address); the McAuliffe Youngkin campaign appears to be infected by “dirty tricks” of McAuliffe as Younkin charged him of colluding with the Lincoln Project to have 5 false Youngkin supporters appear at his rally dressed like “Unite the Right” supporters (McAuliffe’s campaign denied the allegation declaring “there is only one white supremacist in the race—Glenn Youngkin” before the Lincoln Project admitted to the deceptive stunt); the Wokes and PC warriors ranting against the tomahawk chop of Atlanta Brave fans have been scalped by Baseball Commissioner Rob Mansfeld who supported its use pointing out that the Eastern Band of the Cherokee Indians are supportive of it (wonder if Pocahontas is too busy with her billionaire’s wealth tax to weigh in on the issue); Scott Ziegler, the embattled superintendent of the Loudin County School District, evidently has never read How to Win Friends and Influence People as he compares the parents in Loudin County protesting CRT to the protestors on July 6 and those drinking on a public beach; Rep. Adam Kinzinger, a Red who voted to impeach Trump has announced he will not seek reelection; AG Merrick Garland who refused to answer a simple question of whether he had contacted the Office of Government Ethics given his son-in-law’s company Panorama who has business dealings with the Loudin County School District that may involve the CRT that the parents were so outraged about is now facing a demand for investigation by the Office of Government Ethics filed by America First Legal (Garland is coming across as a man bent on revenge due to his failure to even get a vote on his nomination); WHO’s leader Tedros disgraced over his handling of China’s involvement in the COVID-19 pandemic is running for another term unopposed; in the hardware versus software market cap battle Microsoft at $2.47 trillion has edged Apple’s $2.46 trillion; as Biden jets off to Rome for an audience with the Pope and the G20 Summit in Rome and then to Switzerland for a climate conference while the nation is beset with major issues where he and his Immigration Czar are MIA, leave it to the political cartoonist to reveal the molehill he is focused on while ignoring the chaos of the mountains: 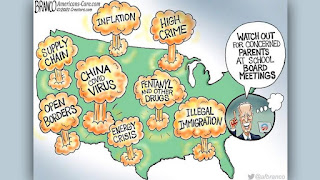 Chicago Gun Violence: Hey Jackass.com is alive and well to collect data to show that through October 28, 2021, gun violence involving mostly persons of color shooting mostly persons of color in Chicago is alive and well with 3895 persons shot of whom 668 have died.
As always, I hope you enjoy today’s holidays and observances, factoids of interest for this day in history, a  music video link to  “Look What You Made Me Do”  by Taylor Smith, the fact that you rarely express ideas that are shuck; and a quote by Christina Romer on the 1929 Stock Market Crash, secure in the knowledge that if you want to send a gift for any memorable events like Halloween or Veterans  Day, college graduations, birthdays, weddings, or anniversaries, you know that the Alaskanpoet can provide you with a unique customized poem at a great price tailored to the event and the recipient. Please contact me for details on pricing.
1.  International Internet Day—created by the Association of Internet Users and celebrated since 2005 on this day which is the anniversary of the first computer to computer transmission on this day in 1969.
2.  World Stroke Day—created by the World Stroke Organization in 2006 to create awareness of a condition that is the leading cause of disability and the second leading cause of death and means to prevent a stroke and methods to recover from one.
3. 2017  Number 1 Song USA—the number 1 song in 2017 on this day was “Look What You Made Me Do” by Taylor Swift  on  a run in that position of 3 weeks to join 11 other  songs that achieved number 1 status  as 12 acts achieved  their first number 1 song on the Billboard Hot 100. Here is a music video of “Look What You Made Me Do” by Taylor Swift:  https://www.youtube.com/watch?v=3tmd-ClpJxA
4.  Word of the Day—the word of the day is “shuck” which means nonsense which describes typically what comes out of the mouths of any member of the Squad.
5.  Rx For Death—celebrating the birth on this day in 1943 of noted screen writer, actor and producer Don Simpson who produced such memorable films as Flashdance, Beverly Hills Cop, Top Gun and The Rock that grossed over $3 billion worldwide was heavily addicted to drugs both prescription and illegal and before he died of heart failure due to combined drug intoxication of cocaine and prescription drugs from a habit that was running $60,000 a month on prescription drugs on January 19, 1996.
On this day in:
a. 1929 in what became known as “Black Tuesday” the New York Stock Exchange crashed marking the end of the great Bull Run of the 20’s to be replaced with the Great Depression.
b. 1960 a plane carrying the Cal Poly Mustangs football team crashed shortly after takeoff from Toledo, Ohio, killing 22, including 16 members of the football team and injuring 24.
c. 1994 53 year old Francisco Duran fired over 2 dozen rounds at the White House  trying to kill President Clinton before being subdued by onlookers. Arrested and convicted after he asserted a not guilty plea by reason of insanity and was sentenced to 40 years. Currently rotting in a Super Max federal penitentiary with a parole date in 2029.
d. 1998  the Space Shuttle Discovery, carrying 77-year-old John Glenn aboard, was launched into space with the distinction of carrying the oldest person into space until l surpassed by 82 year old Wally Funk and later by 90 year old William Shatner thanks to Jeff Bezos whose trips unlike Glenn’s were very brief and suborbital.
e. 2008 Delta Airlines merged with Northwest Airlines reducing the number of major carriers in the U.S. to 5.
Reflections on the Stock Market Crash known as Black Tuesday: “ The stock market crash in October 1929 didn't destroy a particularly large amount of wealth or make people highly pessimistic. Rather, it made companies and consumers very unsure about future income, and so led them to stop spending as they waited for more information.” Christina Romer noted Professor of Economics at the University of California Berkeley and former chair of the Council of Economic Advisers for President Obama
Please enjoy the poems on events of interest on my twitter account below (if you like them, retweet, and follow me) and follow my blogs. Always good, incisive and entertaining poems on my blogs—click on the links below. Go to www.alaskanpoet.blogspot.com for Ridley’s Believe It Or Not—This Day in History,  poems to inspire, touch, emote, elate and enjoy and poems on breaking news items of importance or go to  Ridley's Believe It Or Not for just This Day in History.

© October 29 ,2021 Michael P. Ridley aka The Alaskanpoet
Alaskanpoet for Hire, Poems to Admire
Poet Extraordinaire, Beyond Compare
A Unique Gift, All Recipients Receive a Lasting Lift

Posted by Michael P. Ridley aka the Alaskanpoet at 6:07 PM