RIDLEY’S BELIEVE IT OR NOT October 20, 2021
CV World Cases: The CV pandemic across the planet continues on an increasing basis with cases now over 246 million at 246,586,837 cases,  17,807,469 of which are active, 224,779,368  closed with 219,846,826 recoveries (97.81%), and 4,932,542 deaths (2.19% )to continue the low trend of increased cases with increased recovery percentages and decreased death percentages with some plateaus, dips, and rises.
CV USA Cases: Total cases now over 46 million at 46,002,053 with 9,541,967 active cases of which 14,797 are serious or critical, (8,599 on 3/25/2021) (back to steady decreases despite the  Delta variable to .156 % of active cases and to increase the reduction from the 29,271 peak on 12/31/2020 to 14,474, 36,460,386 closures with 748,827 deaths (2.05%) and with 35,711,559 recoveries (97.95%). Our death rate percentage is still .14% lower than the world’s death rate.
Standing: On a deaths per million population measure on a steady   but slow climb to 2245 the U.S. ranks behind Peru (5956) the new number 1 which has had a quantum leap in deaths previously unmatched which was a change in the classification to give Peru the a new method of reporting to have a fatality rate of 9.26% of total cases now; Bulgaria the new number 2 (3286), Hungary just passed by Bulgaria (3162),   Brazil (2815) which has been hit with a rapid rise in deaths and cases and passed us and Italy, Argentina (2531),  Columbia newly added to the list  (2460), and  Romania (2257),  and slightly better than Belgium (2213), Italy (2182), Mexico (2180),  UK (2,034),  Poland (2018), Chile (1947),  Spain (1861),  Ecuador newly added to list (1831),  France (1793), Portugal (1782), Bolivia (1589),  Sweden (1468) that never closed its economy down like we did, and Switzerland (1280).
Tests: We have now conducted 664,015,290 tests (2,020,903/M) just passed by France at 2,309,846 who is now 1st  on a per capital basis for all nations (other than those nations that contain small populations like Bahrain, Denmark, Israel, Malta, Singapore and UAE) other than the U.K. which remains as king of the mountain with respect to tests at 4,729,189/M.
CV Open Gate: Lost in the pronouncements by Biden and his lackeys  that there is no crisis of illegals surging across the border is that fact that COVID-19 is alive and well and spreading in the Northern Triangle and Mexico which is  11th  on my list of deaths from the pandemic  at 2180/M with 355,694 active cases and a fatality rate of 8.36% of closed cases and the 3 countries in the Northern Triangle in terms of active cases and deaths per million are as follows even though the data may be suspect as underreported (regardless of number we need no more cases):
Guatemala:  Active Cases:  32,161 Deaths/M 787
Honduras:    Active Cases: 248,700 Deaths/M 1,004
El Salvador:  Active cases:   14,495 Deaths/M 539
US Vaccinations: As of 10/20/2021 409.4 million doses,  .816 million per day (down to 3 months for 75% of population vaccinated) and in California 90,556  per day  (which means if the rate does not increase it will take us now only  some 2 months to have 75% of the population of California vaccinated which many believe is necessary to develop herd immunity (other than Flip Flop Fauci who may believe that 90% is required).  In California 52,655,046 total doses have been given (86.7%  of doses received to exceed the U.S. average of 82.7%), California has not moved from 6th to 7th  of the 50 states in terms of the percentage of doses administered as a percentage of doses delivered to the states and at 60.4% of its population fully vaccinated compared to the U.S. average of 57.1% and has  not moved  from 15th in terms of getting vaccines received into arms and the percentage of the population fully vaccinated compared to other states.
Non  CV News: Nikolas Cruz, the shooter in the Parkland School case, entered a plea of guilty to the killing of 17 persons at the school and now faces the penalty phase where the jury will determine whether he will face life of execution; AG Garland under severe criticism for his labeling of parents as domestic terrorists and referring the matter to the FBI will face his first House Oversight hearing on Thursday; in the Quinnipiac poll just released on Tuesday, Biden’s approval continues to sink like a stone with an approval rate of 28% among Independents, 3% among Reds and 80% among Blues (given the Blue infighting between the expanding Progressives and the dwindling Moderates some surprise approval is that high) and 58% of Americans do not want Trump to run in 2024 (in a potential suicidal election mode 78% of Reds want him to run); the mask wearing debate continues unabated for schools and the CDC Director Walensky continues along with her allies the teachers unions to press for mask mandates for kids returning to school (when will we ever get some unbiased studies on the effectiveness of masks in preventing the spread of the COVID-19 virus?); the undermanned and underfunded CBP arrested more than 1.7 million illegals, a record only surpassed in 1986 when the Amnesty Bill was passed; our vaunted intelligence community was caught asleep at the switch as China revealed that it had developed a hypersonic ICBM capable of carrying nuclear warheads; McAuliffe may be cracking under the increasing signs that his support of CRT and opposition to parents’ influencing what is taught in Virginia’s public schools after he terminated a televised interview half way into it slamming the interviewer for doing his job by asking “dumb questions” ( in Blue speak questions that were not T-Ball or softball); Witless Whitmer has indicated that she will veto a Red sponsored bill that enable students who so desire to enter private schools where they will have a much better chance of receiving a quality education as opposed to being trapped in a failed urban school preparing them only for prison; leave it to the political cartoonist to reveal how out of touch General Milley is concerning the issues that should trouble the nation’s defense: 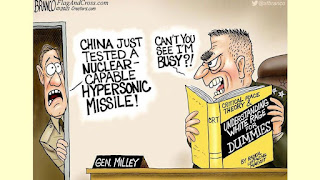 © October 20 ,2021 Michael P. Ridley aka The Alaskanpoet
Alaskanpoet for Hire, Poems to Admire
Poet Extraordinaire, Beyond Compare
A Unique Gift, All Recipients Receive a Lasting Lift

Posted by Michael P. Ridley aka the Alaskanpoet at 12:23 PM