Merrick Garland was touted by Obama as a moderate centrist SCOTUS nominee
Thank God the Reds stalled his nomination as we now have seen his true colors as Biden’s AG
As CRT by the left and the teachers’ unions was being pushed down our throats
Parents black, brown and white were protesting that racism and divide it seem to promote
Parents showed up at school board meetings objecting to what their kids were being taught
Angry voices, mics cut off by school board members causing the National Association of School Boards to DOJ help being sought
Garland rose not to the defense of free speech
But rather to parent protests he considered overreach
In his mind he equated protest with domestic terrorism and so informed the FBI
The FBI Section on Domestic Terrorists were now to be involved and assistance to school boards supply
Having the FBI come knocking on your door to investigate your school board meeting conduct
Will have a chilling effect on parents’ 1st Amendment Rights and any discussions on whether CRT belongs obstruct
No federal crimes or state lines are being crossed by parents going to a school board meeting
Even if the protests crossed the line into disorderly conduct it’s a local issue and FBI jurisdiction is fleeting
But if one wants to add to the threat as a conspiracy measure
Garland’s daughter is married to the founder of Panorama a firm with school board CRT like data consulting to its profit treasure
Panorama and Garland will immediately say there is no conflict not even the appearance
Leave it to the political cartoonist to raise the issue of whether Garland is not guilty of to the conflict of interest rules nonadherence: 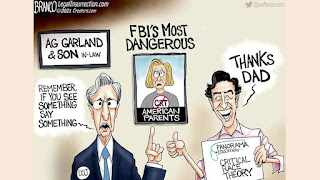 Posted by Michael P. Ridley aka the Alaskanpoet at 11:58 PM