October 21, 2021 Ridley's Believe It Or Not International Shakeup Day

RIDLEY’S BELIEVE IT OR NOT October 21, 2021
CV World Cases: The CV pandemic across the planet continues on an increasing basis with cases now over 243 million at 243,243,001 cases,  17,855,784 of which are active, 225,363,187  closed with 220,420,425 recoveries (97.81%), and 4,942,762 deaths (2.19% )to continue the low trend of increased cases with increased recovery percentages and decreased death percentages with some plateaus, dips, and rises.
CV USA Cases: Total cases now over 46 million at 46,174,547 with 9,522,759 active cases of which 14,232 are serious or critical, (8,599 on 3/25/2021) (back to steady decreases despite the  Delta variable to .149 % of active cases and to increase the reduction from the 29,271 peak on 12/31/2020 to 15,039, 36,651,788 closures with 753,747 deaths (2.06%) and with 35,898,041 recoveries (97.94%). Our death rate percentage is noel .14% lower than the world’s death rate.
Standing: On a deaths per million population measure on a steady   but slow climb to 2260 the U.S. ranks behind Peru (5956) the new number 1 which has had a quantum leap in deaths previously unmatched which was a change in the classification to give Peru the a new method of reporting to have a fatality rate of 9.26% of total cases now; Bulgaria the new number 2 (3320), Hungary just passed by Bulgaria (3164),   Brazil (2819) which has been hit with a rapid rise in deaths and cases and passed us and Italy, Argentina (2532),  Columbia newly added to the list  (2461), and  Romania (2280),  and slightly better than Belgium (2215), Italy (2183), Mexico (2183),  UK (2036),  Poland (2019), Chile (1947),  Spain (1862),  Ecuador newly added to list (1831),  France (1794), Portugal (1784), Bolivia (1590),  Sweden (1468) that never closed its economy down like we did, and Switzerland (1280).
Tests: We have now conducted 667,292,559 tests (2,030,665/M) just passed by France at 2,319,818/M who is now 1st  on a per capital basis for all nations (other than those nations that contain small populations like Bahrain, Denmark, Israel, Malta, Singapore and UAE) other than the U.K. which remains as king of the mountain with respect to tests at 4,745,922/M.
CV Open Gate: Lost in the pronouncements by Biden and his lackeys  that there is no crisis of illegals surging across the border is that fact that COVID-19 is alive and well and spreading in the Northern Triangle and Mexico which is  11th  on my list of deaths from the pandemic  at 2183/M with 385,347 active cases and a fatality rate of 8.36% of closed cases and the 3 countries in the Northern Triangle in terms of active cases and deaths per million are as follows even though the data may be suspect as underreported (regardless of number we need no more cases):
Guatemala:  Active Cases:   9,716 Deaths/M 794
Honduras:    Active Cases: 248,747 Deaths/M 1,006
El Salvador:  Active cases:   14,483 Deaths/M 541
US Vaccinations: As of 10/20/2021 409.4 million doses,  .816 million per day (down to 3 months for 75% of population vaccinated) and in California 90,556  per day  (which means if the rate does not increase it will take us now only  some 2 months to have 75% of the population of California vaccinated which many believe is necessary to develop herd immunity (other than Flip Flop Fauci who may believe that 90% is required).  In California 52,655,046 total doses have been given (86.7%  of doses received to exceed the U.S. average of 82.7%), California has not moved from 6th to 7th  of the 50 states in terms of the percentage of doses administered as a percentage of doses delivered to the states and at 60.4% of its population fully vaccinated compared to the U.S. average of 57.1% and has  not moved  from 15th in terms of getting vaccines received into arms and the percentage of the population fully vaccinated compared to other states.
Non  CV News: The human remains found yesterday in Florida have been confirmed to be those of Brian Laundrie although his cause of death has not be confirmed; Merrick Garland was grilled by the House Oversight Committee today and seemed unaware of the reality of the threats of violence and harassment against teachers and school board members that prompted the DOJ’s involvement and somewhat unprepared; Democrats in Connecticut have formed a new PAC Democrats Against Parents with tweets comparing parents who are protesting CRT to noted movie horror creatures (brilliant way to turn parents with school kids against the party in droves next November); hard to believe but the latest poll averages  shows Biden’s approval/disapproval rating lower than Obama and Bush but higher than Trump’s at 43/51 to 40/55 (watch the rising inflation rates and the continuing border surge to accelerate Biden’s decline); recent poll about concerns of voters showed inflation and political agendas of school boards are major concerns (explains why McAuliffe is in major trouble in Virginia); hard to believe given Biden’s rating collapse but he is coming soon to Virginia to campaign for Terry McAuliffe); bipartisanship briefly surfaced in the House where it found Steve Bannon in contempt of Congress for failing to comply with a subpoena concerning events surrounding January 6, 2021 demonstrations at the Capitol; Missouri and Texas have just filed suit to compel the federal government to resume construction of the border wall; Dodger bats which had been in hibernation came out and came out in force as the Dodgers facing elimination 3-1 beat the Braves in game 5 11-2;  CNN’s Biden’s Town Hall was packed with 7 Blues and 2 Reds and Biden even with Anderson Cooper to moderate damage, came across as someone really cognitively struggling;  leave it to the political cartoonist to reveal the Biden myth that Reconciliation won’t cost a thing when the costs will create a great hole our kids and grandkids will be stuck with: 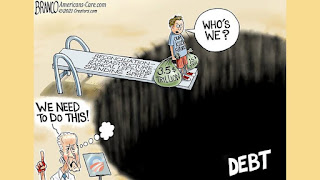 Chicago Gun Violence: Hey Jackass.com is alive and well to collect data to show that through October 20, 2021, gun violence involving mostly persons of color shooting mostly persons of color in Chicago is alive and well with 3817 persons shot of whom 649 have died.
As always, I hope you enjoy today’s holidays and observances, factoids of interest for this day in history, a  music video link to  “The Hills”  by The Weeknd, the fact that you have never worked as a shenago; and a quote by Bob Woodward’s failed attempt to rewrite the history of Watergate, secure in the knowledge that if you want to send a gift for any memorable events like Halloween or Veterans  Day, college graduations, birthdays, weddings, or anniversaries, you know that the Alaskanpoet can provide you with a unique customized poem at a great price tailored to the event and the recipient. Please contact me for details on pricing.
1.  International Shakeout Day—created by the United States Geological Survey in 2008 and celebrated on 3rd Thursday in October to create awareness of earthquakes with earthquake drills to help protect those persons subject to an earthquake which unlike hurricanes or tornados occur with almost no reliable predictable warning.
2.  Latina Women Equal Pay Day—commemorating the day each year that a Latina women has worked enough days in the current year when added to the past year results in her equaling the amount earned by non-Hispanic white males for the similar job.
3. 2015  Number 1 Song USA—the number 1 song in 2015 on this day was “The Hills”  by The Weekend  on  a run in that position of 6 weeks to join 8 other  songs that achieved number 1 status  and join 5 other acts that  achieved their first number 1 song on the Billboard Hot 100. Here is a music video of “The Hills” by The Weeknd: https://www.youtube.com/watch?v=yzTuBuRdAyA This 31 year old Canadian R&B singer with a falsetto voice was born as Abel Makkonen Tesfaye has been performing since 2009 after beginning to release his songs on YouTube and has sold 75 million records.
4.  Word of the Day—the word of the day is “shenago” which means a casually hired dock worker which given the automation at clogged ports like Los Angeles and Long Beach will probably not be able to help with the supply chain shortages.
5.  The Third Out—celebrating the birth on this day of Brett Mydland, noted keyboardist for the Grateful Dead who became the third member of the band to die of a drug overdose following ingesting some speedballs on July 26, 1990.
On this day in:
a. 1850 the first National Women’s Rights Convention was held in Worcester, Massachusetts where the participants demanded among other things suffrage.
b. 1911 in an omen of the future role of airplanes in war occurred when the first use of an airplane occurred in military operations in the Italo-Turkish War when Italian planes were used for reconnaissance.
c. 1973 the Watergate noose became tighter as President Nixon agreed to turn over the subpoenaed Watergate Tapes to the Senate Committee investigating the Watergate break-in.
d. 1995 Selena’s former fan club president Yolanda Saldívar was convicted of killing up and coming singer Selena on March 31, 1995 and sentenced to life imprisonment in Texas but eligible for parole on March 30, 2025.
e. 2002 40 heavily armed Chechen terrorists seized the Dubrovaka Theater in Moscow holding some 850 people hostage and after the Russians stormed the theater all 40 terrorists had been killed along with 131 hostages.
Reflections on the Watergate Tapes: “ After Nixon resigned in 1974, he engaged in a very aggressive war with history, attempting to wipe out the Watergate stain and memory. Happily, history won, largely because of Nixon's tapes.” Bob Woodward, noted American author and co-author of All The President’s Men.
Please enjoy the poems on events of interest on my twitter account below (if you like them, retweet, and follow me) and follow my blogs. Always good, incisive and entertaining poems on my blogs—click on the links below. Go to www.alaskanpoet.blogspot.com for Ridley’s Believe It Or Not—This Day in History,  poems to inspire, touch, emote, elate and enjoy and poems on breaking news items of importance or go to  Ridley's Believe It Or Not for just This Day in History.

© October 21 ,2021 Michael P. Ridley aka The Alaskanpoet
Alaskanpoet for Hire, Poems to Admire
Poet Extraordinaire, Beyond Compare
A Unique Gift, All Recipients Receive a Lasting Lift

Posted by Michael P. Ridley aka the Alaskanpoet at 6:15 PM