In 2016 Hillary by the polls showing her in the lead was seduced
Believing there was no way her coronation chances would be reduced
Purchased massive amount of fireworks to a salute to her coronation display
Oblivious to the signs that her coronation chances had faded away
Barely campaigned or campaigned to small crowds in the closing days
While Trump on the rallies stump with SRO  and people outside the venue coming his way
In Virginia it looks like a 2016 déjà vu
As voters support for Youngkin only grew
Watching McAuliffe rallies is like paraphrasing the Vietnam War protest sign
“What if they gave a McAuliffe rally and no one came this time?”
Saturday morning at a McAuliffe rally sponsored by Senator Kaine
Only 40 probably voters pressed to attend came
Appearing at a rally like being recorded by a voter pollster is not the same as casting a vote
But crowd rally size and McAuliffe’s inane view of parental role in education makes his win chances remote
Unless massive mail in Blue voters voted before McAuliffe’s shooting himself in the foot during his  debate
When the polls close on Election Day a McAuliffe loss maybe a landslide will be his fate
© October 30, 2021 The Alaskanpoet 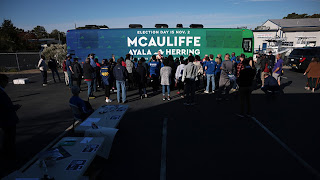 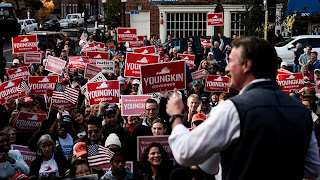 Posted by Michael P. Ridley aka the Alaskanpoet at 11:51 AM