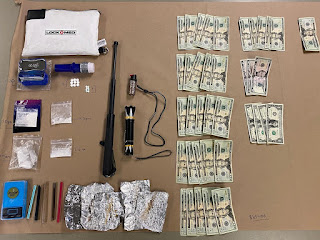 Glad someone acted to a drug mall on our streets prevent
One less pusher of death to the Orange County quickly sent
More so than ever before we need to support our thin Blue Line
A levee of courageous men and women holding back a tidal wave of violent crime
In SLO yesterday 2 cops whose lives in leftist BLM thought must not matter
Serving a warrant were shot--1 will live and the other's family by his death will be shattered
We must never allow the PC Warriors to force us to “Blue Lives Matter” erase
While ignoring the carnage of black on black shootings which is a national disgrace
If we allow the defunding of the police to hinder their ability to protect, serve and arrest
God help us all, many of us unarmed and heading back to the violent times of the Wild, Wild West!

Posted by Michael P. Ridley aka the Alaskanpoet at 3:39 PM