US Vaccinations: As of 5/15/2021 270.8 million doses and finally after a third day of previous increases dropping for the third day to 1.93 million per day in the last week sounds impressive but if the rate does not increase it will take us now back to some 4 months to have 75% of the population vaccinated which many believe is necessary to develop herd immunity. In California 34,715,312 total doses have been given (78.5% of doses received now less than the U.S. average of 78.6%), but even with the pressure of a recall to be scheduled this fall which hopefully end Newsom’s term, California has moved down p from 26th tied with Maryland to 27th   out of the 50 states in terms of the percentage of doses administered as a percentage of doses delivered to the states and at 37.7% of its population fully vaccinated compared to the U.S. average of 36.7% has  moved  up  from 24th tied with Ohio to 23rd tied with Alaska among the 50 states.  A long way to go to get herd immunity in terms of getting vaccines received into arms and the percentage of the population fully vaccinated compared to other states which means a great reason to recall this inept and hypocritical governor.
Non CV News: India, the Bengal Tiger who escaped on Sunday and has been the  object of a massive search in Houston, has been recovered uninjured and from the video clip seems to be overjoyed https://www.foxnews.com/us/houston-tiger-found-safe-after-terrorizing-neighborhoodhavtfodday and band As Police Week comes to an end and police shot and killed in the line of duty for the period ending May 15 total 23 up 28% over the same period last year Biden panders to the left and BLM that minority communities are distrustful and fearful of police (what they should fear is the wave of black on black shootings and killings in urban killing zones like Chicago which I tally daily and over 95% of the deaths are blacks shooting blacks); our once independent and objective and respected FBI has finally reversed its inane conclusion the attack on Red members practicing for the annual Congressional Baseball game was a “suicide by cop” event and called it what it was “a domestic terrorist attack” in which the terrorist was an avowed leftist; while Israel seems to be bending over backwards as it warned occupants of the office building housing journalists that was also suspected of storing weapons for Hamas to evacuate which they did before it was destroyed, no such niceties observe by Hamas launching massive numbers of rockets against civilians in Israel which fortunately most are destroyed in flight by Israel’s Iron Dome; Biden belatedly has called Hamas’ leader and Israeli leader Netanyahu to reaffirm Israel’s right to defend itself but calling for a cease fire and economic aid to Palestinians; when more than ever the nation is looking for compromise from the Swamp to get things done and issues resolved, AOC ranks as the least bipartisan Blue in the House; a professor at St. John’s, the daughter of Holocaust Survivors was fired for reading a passage with the N-word from Mark Twain’s novel Puddin’head Wilson which focused on the absurdity of slavery and racism (academic freedom no longer exists unless one is espousing tenets of the left); Biden doled out another incentive to illegals to come here reversing Trump’s executive order barring immigrants who cannot afford to pay for health care; California is facing severe drought conditions but the water situation on the California Oregon border now catastrophic as many farmers are having their irrigated water cut off (time to consider building solar and wind powered desalinization plants?);  Jimmy Inn, the Stockton police officer killed in a shootout with Lance Lowe, a parole who was released in April of last year after being sentenced to 5 years in 2018 for armed robbery with a gun, has left a wife, a 7 month old son and 2 step children, and 2 stepchildren, age 12 and 14.
Leave it to the political cartoonist to reveal the dangers and mistake of exchanging failed and weak policies for aggressive and egotistical behavior: 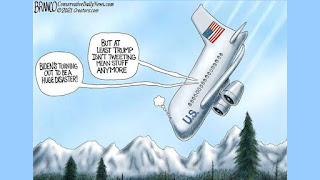 Chicago Gun Violence: Hey Jackass.com is back to show that through May 14, 2021,  gun violence involving mostly persons of color shooting mostly persons of color in Chicago is alive and well with 1215 persons shot of whom 211 have died.
As always, I hope you enjoy today’s holidays and observances, factoids of interest for this day in history, a video musical link to “The Sign“ by the Ace of Base , the fact that you have achieved retiracy and a quote from Mark Gottdiener on Las Vegas,  secure in the knowledge that if you want to send a gift for any memorable events like Father’s Day, college graduations, birthdays, weddings, or anniversaries, you know that the Alaskanpoet can provide you with a unique customized poem at a great price tailored to the event and the recipient. Please contact me for details on the pricing.
1. Armed Forces Day—created by Secretary of Defense Louis Johnson on August 31, 1949 to celebrate those serving in all branches of our Armed Forces and first celebrated on May 20, 1950 and since then on the 3rd Saturday in May.
2. HG Awareness Day—created by the HER Foundation in May 15, 2012 to promote awareness of Hyperemesis Gravidarum (morning sickness) that affects most pregnant women but can be serious and life threatening in some cases.
3. 1994 Number 1 Song USA—the number 1 song in 1994 was “The Sign” by Ace of  ase on a run of 6 weeks non continuous in that position to join 9 other songs reaching number 1 and 5 other acts achieving their first number 1 song. Here is a video recording by Ace of Base of “The Sign”: https://www.youtube.com/watch?v=iqu132vTl5Y Ace of Base was a Swedish group of 3 Berggren siblings   and Ulf Ekberg formed in 1990 and largely inactive since 2012 but never formerly disbanded.
4.  Word of the Day—the word of the day is “retiracy” which means having sufficient means or property to be able to retire which many young people graduating from college with a huge amount of debt and degrees that are useless in finding good paying jobs are going to have difficulty in achieving.
5.  Never Too Late to Sing—celebrating the birth on this day in 1942 of noted actress, singer/ songwriter K.T. Oslin who achieved commercial success singing at age 45 and semi-retired in 2001 to later be afflicted with Parkinson’s Disease in 2015 to move into an assisted living facility and die from COVID-19 on December 21, 2020 a week after being diagnosed with the disease.
On this day in
a. 1905 Las Vegas was founded in Nevada to ultimately grow into the gambling Mecca of the United States.
b. 1963 the last Mercury spacecraft was launched into orbit with Gordon Cooper who became the last American astronaut to enter space by himself.
c. 1988 after 8 years of aping the United States’ experience in South Vietnam, the Soviet Union call it quits and began to withdraw its forces from Afghanistan due in large part to the Stingers provided to the insurgents by the U.S. that were causing Soviet Hind helicopters to drop like flies.
d. 2008 California became the second state to legalize same sex marriages after Massachusetts.
e. 2010 Jessica Watson, age 16 became the youngest person to sail around the world non assisted, nonstop and solo in a journey that started on October 18, 2009 from Sydney, Australia and end in Sydney on May 15, 2010, 3 days before her 17th birthday.

Reflections on Las Vegas: “In the fledgling days of the town, the notorious Block 16 was set aside for card games and prostitution. Sin and commerce have marched hand-in-hand ever since, but this alliance made Las Vegas no more atypical than any other American city of the time. The difference is that Las Vegas extolled with pride what other places sought to hide. To the commonplace culture of heavily populated cities and industrial towns that made up the urban fabric of the country, Las Vegas alone stood as the behavioral "Other," a land where the "victimless" crimes of sex, drink, and gambling were not only condoned, but celebrated.” Mark Gottdiener, noted urban sociologist.
Please enjoy the poems on events of interest on my twitter   account below (if you like them, retweet, and follow me) and follow my blogs. Always good, incisive and entertaining poems on my blogs—click on the links below. Go to www.alaskanpoet.blogspot.com for Ridley’s Believe It Or Not—This Day in History,  poems to inspire, touch, emote, elate and enjoy and poems on breaking news items of importance or go to  Ridley's Believe It Or Not for just This Day in History.

© May 15, 2021 Michael P. Ridley aka The Alaskanpoet
Alaskanpoet for Hire, Poems to Admire
Poet Extraordinaire, Beyond Compare
A Unique Gift, All Recipients a Lasting Gift

Posted by Michael P. Ridley aka the Alaskanpoet at 9:17 PM