US Vaccinations: As of 5/18/2021 275.5 million doses and finally after one day of a significant drop an increase of .15 million to 1.77 million per day in the last week sounds impressive but if the rate does not increase it will take us now back to some 4 months to have 75% of the population vaccinated which many believe is necessary to develop herd immunity. In California 35,518,035 total doses have been given (79.0% of doses received to trail the U.S. average of 79.5%), but even with the pressure of a recall to be scheduled this fall which hopefully end Newsom’s term, California has  moved from 27th to 24th tied with Indiana and Tennessee out of the 50 states in terms of the percentage of doses administered as a percentage of doses delivered to the states and at 39.0% of its population fully vaccinated compared to the U.S. average of 37.5% has  moved  up from  24th  to 21st tied with Michigan among the 50 states.  A long way to go to get herd immunity in terms of getting vaccines received into arms and the percentage of the population fully vaccinated compared to other states which means a great reason to recall this inept and hypocritical governor.
Non  CV News: Rashida Tlaib seems to be the point person on the left attacking Israel for apartheid policies and terrorist activities against the Palestinians and had a heated 8 minute on the tarmac before Biden’s meeting with autoworkers (not sure what the two talked about but he called her Rasheed and praised her later from the podium); Blues will not support any condemnation for its rocket attacks on Israel causing many to wonder how solid there support of Israel is or whether they are going through the motions only; Pelosi will not let go of remote voting for the House despite the huge number of House members that have been vaccinated; Mark McCloskey, who with his wife with guns in hand to defend their home when BLM “protestors” broke through a gate to his gated community, will be running for Senate in Missouri; Consumers Information a nonprofit consumers’ group founded to provide product information to consumers has launched a new ad campaign against companies like Nike, American Airlines and Coca-Cola putting woke politics over the needs of their consumers; Black Lives Matter was showing its Marxist colors as it announced it was standing with Hamas as Hamas rocket attacks against Israeli civilians have killed 12 Israelis while over 200 Palestinians have lost their lives in Gaza due to Israeli air strikes (Blues in increasing numbers are demanding Biden be more forceful in obtaining a cease fire in the conflict); Mayor Lightfoot, who has been from day one MIA on the color on color shootings in Chicago, evidently is practicing her own brand of racism by refusing to be interviewed by any journalist other than one who is brown or black.
Where’s Waldo is still MIA in her position on Immigration Czar and 56 days have come and gone and not peep out of this political hack on the border; as a barometer of how unsafe and troubled Americans are on the issue of safety, gun sales are going through the roof as background check requests are up 31% in the first 4 months of this year compared to the same period last year; as America is trying to reopen its economy and return to its way of life, leave it to the political cartoonist to reveal the establishment’s reluctance to allow that to happen as evidenced by Fauci: 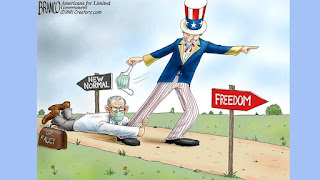 Chicago Gun Violence: Hey Jackass.com is back to show that through May 17, 2021,  gun violence involving mostly persons of color shooting mostly persons of color in Chicago is alive and well with 1262 persons shot of whom 218 have died.
As always, I hope you enjoy today’s holidays and observances, factoids of interest for this day in history, a video musical link to “Hypnotize“ by Notorious B.I.G. the fact that you don’t allow retrophilia from diverting you from the present or preparing for the future  and a quote from George Will on the success of the Tennessee Valley Authority, secure in the knowledge that if you want to send a gift for any memorable events like Father’s Day, college graduations, birthdays, weddings, or anniversaries, you know that the Alaskanpoet can provide you with a unique customized poem at a great price tailored to the event and the recipient. Please contact me for details on the pricing.

1. World AIDS Vaccine Day— prompted by President Clinton’s Commencement Speech at Morgan State University where he challenged the medical and scientific community to develop a vaccine for AIDS by the end of the next decade and first celebrated on May 18, 1998; despite massive efforts thus far we are not close to a vaccine for this deadly disease.
2. National Speech Pathologists Day—honoring the work of speech pathologists who help those with speech issues caused by injury or disease to enable them to be more effective oral communicators.
3.  1997 Number 1 Song USA—the number 1 song in 1997 was “Hypnotize” by The Notorious B.I.G. on a run of 3 weeks in that position to join 9 other songs reaching number 1 and 6 other acts that achieved their first number 1 song and The Notorious B.I.G. became the 5th artist to reach that status posthumously. Here is a video recording by The Notorious B.I.G. of ”Hypnotize”: https://www.youtube.com/watch?v=glEiPXAYE-U The Notorious B.I.G. was a rapper who in his short career sold 21 million records and caused The Rolling Stone to name him as the most influential rapper of all time. He was killed in a drive by shooting while in a car in L.A. on March 9, 1997 at the age of 24 and his murderer has never been identified.
4.  Word of the Day—the word of the day is “retrophilia” which means a love of things of the past which can sidetrack you from learning how to cope and master new things and ideas of the future.
5.  I Went to a Fight the Other Night and a Hockey Game Broke Out—celebrating the birth on this day in 1963 of Marty McSorley who played for 17 years in the NHL and was one of the most feared enforcers in the league and who has the dubious distinction of having criminal charges brought against him for assaulting an opposing player resulting in a concussion and his suspension and retirement from hockey. An avid fan of the Kings a team he played on for 8 seasons he ended his career as number 4 in terms of penalty minutes at 3381.
On this day in
a. 1927 Andrew Kehoe angered that he had lost in the election for the town clerk and facing foreclosure of his farm, had previously planted explosives under the Bath Elementary School in Bath Township, Michigan and on this day killed his wife and as the explosives under the school went off he blew up his farm and then drove his explosive laden truck into the school yard as rescuers were combing the wreckage and detonated it killing himself. When it was over, he had killed 38 elementary school children and 6 adults including himself and wounded 58 people. The massacre remains the deadliest school killings in our history.
b. 1933 President Franklin D. Roosevelt signed legislation which created the Tennessee Valley Authority.
c. 1980 Mt. St. Helens in Washington after weeks of seismic activity erupted, killing 57 people and causing 3 billion dollars of damage in the deadliest and costliest in terms of destruction in U.S. history.
d. 1990 a modified French TGV train achieved a world rail speed record of   320.2 m.p.h.
e. 2018 Dimitrios Pagourtzis, a student at Santa Fe High School in Santa Fe, Texas entered the school and started shooting, killing 8 students and 2 teachers and wounding 13 before surrendering after being wounded. He is undergoing psychiatric treatment and has been adjudged unfit to stand trial at the present moment.

Reflections on the creation of the TVA: “The Tennessee Valley Authority and the Interstate Highway System were not just good in themselves. They were good for the morale of government, which periodically needs some inspiring successes.” George Will, noted conservative columnist Newsweek July 25, 1988.
Please enjoy the poems on events of interest on my twitter   account below (if you like them, retweet, and follow me) and follow my blogs. Always good, incisive and entertaining poems on my blogs—click on the links below. Go to www.alaskanpoet.blogspot.com for Ridley’s Believe It Or Not—This Day in History,  poems to inspire, touch, emote, elate and enjoy and poems on breaking news items of importance or go to  Ridley's Believe It Or Not for just This Day in History.

© May 18, 2021 Michael P. Ridley aka The Alaskanpoet
Alaskanpoet for Hire, Poems to Admire
Poet Extraordinaire, Beyond Compare
A Unique Gift, All Recipients a Lasting Gift

Posted by Michael P. Ridley aka the Alaskanpoet at 2:11 AM