May 6, 2021 Ridley's Believe It Or Not National Day of Prayer

US Vaccinations: As of 5/6/2021 252.0 million falling to 2.09 million per day in the last week sounds impressive but if the rate does not increase it will take us now increased to some 4 months to have 75% of the population vaccinated which many believe is necessary to develop herd immunity. In California 31,997,303 total doses have been given (78.0% of doses received slightly more than the U.S. average of 77.6%), but even with the pressure of a recall to be scheduled this fall which hopefully end Newsom’s term, California has finally moved from 27th to 25th  tied with Illinois  out of the 50 states in terms of the percentage of doses administered as a percentage of doses delivered to the states and at 32.9% of its population fully vaccinated compared to the U.S. average of 32.8% is still stuck at 30th among the 50 states.  A long way to go to get herd immunity in terms of getting vaccines received into arms and the percentage of the population fully vaccinated compared to other states which means a great reason to recall this inept and hypocritical governor.
Non CV News: We need the corruptive influence of “dark money” into our political system like the proverbial hole in the head but Biden’s Chief of Staff is a premier Blue dark money head and Biden’s Administration has some 60 similar based leftists already serving in his administration; maybe there is a gleam of hope that the left will realize they are not meant for elective office as Atlanta Leslie Ann Bottoms has seen bottom because of her ineptness and has indicated she will not seek reelection; in another example the total breakdown we are facing in our society, a female 6th grader in  a Rigby, Idaho Middle School has shot and wounded  a custodian and 2 students before being disarmed by a teacher; Biden’s National Day of Prayer was another example of the fact he has lost it in terms of mental acuity in which God was not mentioned or alluded to (if not God who are we supposed to pray to?—a rock, a door knob or our favorite pet?); Gascom, facing recall must believe as a leftist that he is above the law as he refuses to seek the death penalty against Heather Barron and Kareem Leiva for the torture murder of Barron’s  10 year old son Anthony Avalos ( hope this outrage from the conduct of this Soros funded idiot spawns thousands upon thousands of recall signatures); News surfacing that the Melinda and Bill divorce may not be an amicable one but still hopes that the divorce will not impact the work of the Bill and Melinda Gates Foundation.
Pfizer has been hit with a good bad 1-2 punch with the goods news being that its vaccine works against the CV-19 variants but the bad news is that the Biden Administration is pushing to have Pfizer waive its patent protection; Mayor Lightfoot whose city is under daily color on color shootings and murders going through the roof has been quietly lobbying against the end of qualified immunity for cops; Biden who has a proclivity of wearing masks where the CDC says are not needed, throws caution to the wind to meet former president Jimmy Carter and his wife Rosalind, 96 and  93 years old respectively and who would want guests wearing facial masks. 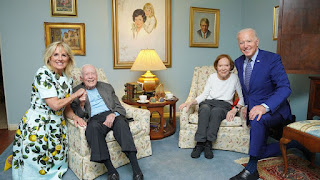 The left is on a full court press to get liberal justice Stephen Breyer to retire so Biden can replace him with a younger jurist which has prompted Diane Feinstein to denounce the move while Rep. Omar is ranting incessantly to have the Senate end the filibuster so the left can pack the court with leftist judges while Biden is still president.
Chicago Gun Violence: Hey Jackass.com is back to show that through May 2, 2021, gun violence involving mostly persons of color shooting mostly persons of color in Chicago is alive and well with 1115 persons shot of whom 195 have died.
As always, I hope you enjoy today’s holidays and observances, factoids of interest for this day in history, a video musical link to “We Are the World” by USA for Africa, that you enjoy not encountering remora in career endeavors and a quote by Bob Hope on USO,  secure in the knowledge that if you want to send a gift for any memorable events like Mother’s Day, college graduations, birthdays, weddings, or anniversaries, you know that the Alaskanpoet can provide you with a unique customized poem at a great price tailored to the event and the recipient. Please contact me for details on the pricing.              1. International No Diet Day—created by Mary Evans Young in the UK in May of 1992  and now expanded to numerous countries to promote acceptance of one’s normal body size which given the fact that obesity is a growing problem in developed countries as it too often leads to diabetes, strokes, heart attacks and joint problems and with CV still running rampant greatly increases the chance of death if someone has become infected.
2. National Day of Prayer—created by Congress in 1952 and calling upon all citizens to turn to God in prayer and meditation on the first Thursday of May although this year in Biden’s proclamation any reference to God did not survive the cut.
3.  1985 Number 1 Song USA—the number 1 song in 1985 was “We Are the World” by USA for Africa on a run of 4 weeks in that position to join 26 other songs reaching number 1 and 16 other acts achieved who their first number 1 status. Here is a video recording by USA for Africa of “We Are the World”: https://www.youtube.com/watch?v=9AjkUyX0rVw The song sold over 20 million copies and raised millions for famine relief in Africa, was written by Ritchie and Jackson in a day, and assembled a group of incredible talents to perform, all of whom checked their egos at the front door of the recording studio.
4.  Word of the Day—the word of the day is “remora” which means a hindrance or a drag which describes the progressives’ view of the Senate’s filibuster’s effect on the transformative agenda they want to push down conservative and moderate throats.
5.  Hurricane Winds Finally Blow Free—celebrating the birth on this day in 1937 of professional boxer Rubin “Hurricane” Carter who was arrested, tried and convicted for a triple murder he did not commit and spent 19 years in prison proclaiming his innocence. He was ultimately released without bail following a successful writ of habeas corpus in the federal courts in November 1985   and when the state, having lost its appeal of the habeas corpus ruling, elected not to retry the case again, had the charges dismissed. He lived as a free man until he died of prostate cancer at the age of 76 on April 20, 2014.
On this day in
a. 1937 the German zeppelin Hindenburg that used highly flammable Hydrogen for its lift as opposed to inert Helium, the export of which to Germany had been banned by the U.S., burst into flames while docking at Lakehurst, New Jersey killing 36 passengers and crew while news cameras caught survivors running for their lives from the flames and a radio announcer tearfully and hysterically broadcasting the horrific carnage.
b. 1941 Bob Hope performed at March Field his first USO show that started a string of USO performances for those serving in the military that would last until 1990.
c. 1949 EDSAC the world’s first practical digital stored program computer ran its first operation.
d. 1998 Steve Jobs unveiled Apple’s iMac.
e. 2010 at 2:32 p.m. the Dow Jones already having slid down over 300 fell down some 600 points in 36 minutes before starting to recover that crash by close of the market in a wild volatile market move known as the “Flash Crash.”

Reflections on USO performances: "Believe me when I say that laughter up at the front lines is a very precious thing — precious to those grand guys who are giving and taking the awful business that goes on there. There's a lump the size of Grant's Tomb in your throat when they come up to you and shake your hand and mumble 'Thanks.' Imagine those guys thanking me! Look what they're doin' for me. And for you."- Bob Hope

© May 6, 2021 Michael P. Ridley aka The Alaskanpoet
Alaskanpoet for Hire, Poems to Admire
Poet Extraordinaire, Beyond Compare
A Unique Gift, All Recipients a Lasting Gift

Posted by Michael P. Ridley aka the Alaskanpoet at 2:21 PM