US Vaccinations: As of 5/14/2021 268.4 million doses and finally after a third day of increases dropping for the second day to 1.95 million per day in the last week sounds impressive but if the rate does not increase it will take us now back to some 4 months to have 75% of the population vaccinated which many believe is necessary to develop herd immunity. In California 34,319,950 total doses have been given (78.0% of doses received now less than the U.S. average of 78.5%), but even with the pressure of a recall to be scheduled this fall which hopefully end Newsom’s term, California has moved up from 26th tied with Maryland to 30th  out of the 50 states in terms of the percentage of doses administered as a percentage of doses delivered to the states and at 37.1% of its population fully vaccinated compared to the U.S. average of 36.2% has  moved  up  from 25th  to 24th tied with Ohio among the 50 states.  A long way to go to get herd immunity in terms of getting vaccines received into arms and the percentage of the population fully vaccinated compared to other states which means a great reason to recall this inept and hypocritical governor.
Non CV News: As another example of why we need term limits at the federal level to prevent the establishment of an aristocratic ruling class, Maxine Waters has been demanding air marshals be on her flights even the flight to Minneapolis to present at the Chauvin verdict pulling air marshals away from flights deemed high risk (sadly this tyrant is alone as more and more members of Congress are demanding Marshals on board making commercial air travel for them more like a concierge service); on the anniversary of Israel’s creation in 1948, the nation looks headed for war against Hamas as it calls up now 9,000 reservists and rockets continue to be launched against it (the progressive side of the Blues is condemning Israel and the BLM shows its true Marxist colors by standing with the Palestinians); rising star in the Reds Elise Stefanick was elected by the Reds to replace an ousted Liz Cheney pledging unity in the party and a goal to regain the House in 2022; a fully vaccinated Bill Maher has tested positive for CV, is asymptomatic, and “is feeling fine” (hopefully he is also unable to spread the virus which would likely imperil the push to get more people vaccinated); the CDC hopefully in its last flip flop has indicated that fully vaccinated people do not need to wear masks indoors or outdoors or heed social distancing as some critics of Biden allege the change is due to the need to distract attention from the growing number of crises the administration seems incapable of handling from the border surge to the Colonial Pipeline ransomware to looming Israeli Hamas armed conflict; concerned over the barrier to going back to work that the enhanced unemployment compensation is creating, 16 states will be terminating those benefits this summer as businesses are complaining they can’t find workers to fill vacant jobs; NYC continues to spiral downward in terms of public safety with the latest being a spree of stabbings on the subway system and instead of more uniformed officers, DeBlasio’s latest brilliant idea is to  of have municipal workers use a buddy system when using the subways.
Medina Spirit, the winner of the Kentucky Derby whose disqualification is still up in the air, has been cleared to run in the Preakness; former MLB player Johnny Damon who was arrested for a DUI with a BAT of .3% has cut a deal with prosecutors in Florida to avoid jail time with community service and a donation to charity; (had he been arrested in Boston given his role in bring the Red Sox a World Series Championship the police would have probably issued a warning and then driven him home); even though it may be hard to link Biden to the Colonial Pipeline ransomware, leave it to the political cartoonist to gauge the public’s thinking of who to blame: 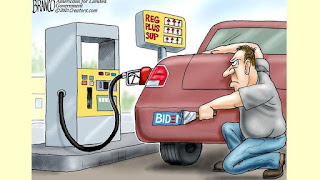 Where’s Waldo, who has not been to the border,  has border state mayors and governors and the Border Patrol rightfully feeling abandoned and mystified as to what if anything she has in mind to address the crisis other than the platitude “address the root causes” has higher negatives than positives which should surprise no one.
Chicago Gun Violence: Hey Jackass.com is back to show that through May 13, 2021, gun violence involving mostly persons of color shooting mostly persons of color in Chicago is alive and well with 1189 persons shot of whom 206 have died.
As always, I hope you enjoy today’s holidays and observances, factoids of interest for this day in history, a video musical link to “Freak Me” by Silk , the fact that you want resipiscence from the Progressives in the Blues and a quote from Burt Rutan on the Space Lab and space travel.  secure in the knowledge that if you want to send a gift for any memorable events like Father’s Day, college graduations, birthdays, weddings, or anniversaries, you know that the Alaskanpoet can provide you with a unique customized poem at a great price tailored to the event and the recipient. Please contact me for details on the pricing.
1. Underground America Day—created by architect Malcom Wells in 1974 to promote the idea of creating housing underground which some 6,000 Americans have followed and who died in 2009 and who true to the holiday he created is probably now buried permanently 6 feet underground.
2. Shades Day—created in 2016 by the Family Holiday Association, a UK charity helping cope with issues such as disability, severe and sudden illness, bereavement, mental health issues and domestic violence and founded on the on the belief that holidays are a lifeline, not a luxury with many of their donated holidays at the beach which usually will involve the need for wearing shades.
3.  1993 Number 1 Song USA—the number 1 song in 1993 was “Freak Me” by Silk on a run of 2 weeks in that position to join 10 other songs reaching number 1 and 5 other acts achieving their first number 1 song. Here is a video recording by Silk of “Freak Me”:https://www.youtube.com/watch?v=Ry6XUsow4Vg Silk was formed as a quintet in Atlanta, Georgia and after a one year hiatus in 2002 is still performing today, having released 7 albums.

4.  Word of the Day—the word of the day is “resipiscence” which means to return to a sane, sound, or correct view or position, something Reds are waiting with bated breath to see from the Squad but sadly probably never will.
5.  Queen for a Day King for Life—celebrating the birth on this day in 1996 of Blake Brockington who was born female but came out as a transgender male and became the first transgender in a North Carolina High School to be crowned a prom king but ended up committing suicide on March 23, 2015 at age 18.
On this day in
a. 1878 in a “you have to be kidding me” moment, in Salem, Massachusetts, Lucretia L. S. Brown, an adherent of Christian Science, accused fellow adherent Daniel H. Spofford of attempting to harm her through his “mesmeric” powers. Fortunately, the judge quickly dismissed the case which gives it the distinction of the last attempted witchcraft trial in the United States.
b. 1943 a Japanese submarine torpedoed and sunk the Australian Hospital Ship the AHS Centaur, off the coast of Queensland, killing all but 64 of the 334 patients, staff and crew aboard.
c.  1955 the Soviet Union and 7 Eastern Europe Communist Countries signed a mutual defense pact to counter NATO.
d. 1973 Skylab, America’s first space station, was successfully launched and was occupied by 3 different crews for a total of about 24 weeks until 1974 and since the Shuttle was not yet available to reboost its orbit higher, the orbit decayed and ended up disintegrating over the Indian Ocean on July 11, 1979.
e. 1988 on Interstate 71 near Carrollton, Kentucky, Larry Mahoney, DUI driver driving the wrong way ran head on into a church youth group bus carrying 67 people, killing 27 and injuring 34. Mahoney was tried for multiple counts of manslaughter, convicted, and served 9 ½ years in prison.

Reflections on Skylab and missed opportunities: “By 1973, we had a space station, the Skylab, and we had multiple probes going up to planets. So, all this wonderful stuff happened in 10 to 15 years. About that time, there should have been enormous initiatives to make it affordable for people to fly in space, not just a handful of trained NASA astronauts and Russian cosmonauts.” Burt Rutan, noted aerospace engineer and designer.
Please enjoy the poems on events of interest on my twitter   account below (if you like them, retweet, and follow me) and follow my blogs. Always good, incisive and entertaining poems on my blogs—click on the links below. Go to www.alaskanpoet.blogspot.com for Ridley’s Believe It Or Not—This Day in History,  poems to inspire, touch, emote, elate and enjoy and poems on breaking news items of importance or go to  Ridley's Believe It Or Not for just This Day in History.

© May 14, 2021 Michael P. Ridley aka The Alaskanpoet
Alaskanpoet for Hire, Poems to Admire
Poet Extraordinaire, Beyond Compare
A Unique Gift, All Recipients a Lasting Gift