US Vaccinations: As of 5/19/2021 277.3 million doses and finally a second day of daily increases in doses from 1.77 to 1.8 million on per day in the last week sounds impressive but if the rate does not increase it will take us now back to some 4 months to have 75% of the population vaccinated which many believe is necessary to develop herd immunity. In California 35,767,717 total doses have been given (78.9% of doses received to trail the U.S. average of 79.4%), but even with the pressure of a recall to be scheduled this fall which hopefully end Newsom’s term, California has  moved from  24th down to 27th out of the 50 states in terms of the percentage of doses administered as a percentage of doses delivered to the states and at 39.3% of its population fully vaccinated compared to the U.S. average of 37.8% has  moved down  from  21st tied with Michigan to 22nd  among the 50 states.  A long way to go to get herd immunity in terms of getting vaccines received into arms and the percentage of the population fully vaccinated compared to other states which means a great reason to recall this inept and hypocritical governor.
Non  CV News: The evidence appears to get clearer each day that the Wuhan Virus that has devastated the world came from the Wuhan Lab as China loses more and more credibility with its denials; Biden had a call with Netanyahu indicating that he expected a de-escalation of the Israeli responses to the now more than 3,400 rockets fired from Gaza toward Israel and Netanyahu diplomatically told Biden to pound sand; hundreds of protestors demonstrated outside the Israeli Embassy in Washington, many of whom were calling for the destruction of the Jewish state; the District Attorney for Elizabeth City, North Carolina has ruled that the shooting of Andrew Brown “while tragic was justified” as Brown in trying to flee drove his car towards the police which decision is not being well received by BLM who are demanding an independent prosecutor and threatening a boycott of the city (some body cam footage was released which appears to show Brown almost hitting an officer as he tries to flee); Pelosi is on a control binge, as 4 Reds protesting the idiocy of requiring the wearing of masks on the House floor were each fined $500 and 7 others were warned (Blues are so quick to demand we follow the science then ignore the latest guidelines on mask wearing for vaccinated people); Christhian Rivera, the illegal alien who brutally stabbed Mollie Tibbets to death, is now in court as his trial for 1st degree murder has begun; Where’s Waldo who continues to be MIA on the border crisis is front and center on the hypocrisy stage as she has her assets in a family trust that Biden vowed to eliminate for federal officials as the assets therein escape financial disclosure requirements; Texas has just adopted a law banning abortions after 6 weeks even though a woman might not even know she was pregnant but bans officials from enforcing it but gives private citizens the right to sue abortion providers who violate it; Letitia James, the AG for New York, has announced that her office’s investigation of the Trump Organization is now a criminal one, no longer civil; one small step to return some balance and sanity to our ivy covered walls does not a victory make, but refreshing to learn that the University of North Carolina has denied tenure to Nicole Hannah-Jones, the founder of the 1619 Project, and instead is considering her for a 5 year contract; after Liz Cheney was ousted from her leadership position in the Reds in the House, leave it to the political cartoonist to reveal that TDS sadly crosses the aisles: 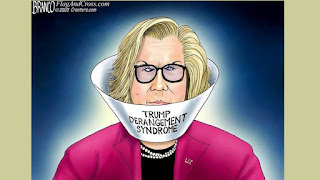 Chicago Gun Violence: Hey Jackass.com is back to show that through May 18, 2021,  gun violence involving mostly persons of color shooting mostly persons of color in Chicago is alive and well with 1270 persons shot of whom 219 have died.
As always, I hope you enjoy today’s holidays and observances, factoids of interest for this day in history, a video musical link to “Too Close“ by Next, the fact that you don’t retrovert from challenges worth meeting  and a quote from Timothy Murphy on illegal immigration, secure in the knowledge that if you want to send a gift for any memorable events like Father’s Day, college graduations, birthdays, weddings, or anniversaries, you know that the Alaskanpoet can provide you with a unique customized poem at a great price tailored to the event and the recipient. Please contact me for details on the pricing.

1. World Family Doctor Day— founded by the World Organization of Family Doctors in 2010 to highlight the role of and contributions by family doctors and primary care teams in healthcare systems around the world.
2. World IBD Day—celebrated since 2010 to promote awareness of Crohn’s disease and ulcerative and to promote efforts to find better treatment modalities for conditions that can really be debilitating.
3.  1998 Number 1 Song USA—the number 1 song in 1998 was “Too Close” by Nest on a run of 5 weeks non continuous in that position to join 15 other songs reaching number 1 and 9 other acts that achieved their first number 1 song. Here is a video recording by Next of “Too Close”: https://www.youtube.com/watch?v=kwEZRPkAAu8 Next is a R&B group consisting of Robert “R.L.” Huggar and 2 brothers Rapheel “Tweety” Brown and Terry “T-Low” Brown formed in 1992 and still performing today.
4.  Word of the Day—the word of the day is “retrovert” which means a turn back which Biden seems to be doing pedal to the metal to return to Obama/Biden policies of the past from Trump’s economic policies.
5.  The First Hippy-Cowboy—celebrating the birth on this day in 1940 of noted  singer and Songwriter Hall of Fame member Mickey Newbury, who was a dynamic force in country music in the 60’s and 70’s and a prolific songwriter whose songs were recorded by other artists and hit the charts. Sadly, a smoker with a genetic disposition to lung problems, he suffered from emphysema and was dependent on oxygen in his later life and died on September 29, 2002 at age 62.
On this day in
a. 1921 Congress passed the Emergency Quota Act which imposed quotas for the  numbers of immigrants allowed into the United States from various countries.
b. 1950 4 transfer barges and several railroad cars loaded with some  420  tons of explosives  and munitions suddenly detonated at loading facilities in South Amboy, New Jersey, killing 31 people and injuring 350 and destroying a good portion of the town near the port facilities.
c. 1986 as a result of growing reports that agents of the ATF were harassing and wrongfully arresting Federal Firearms Licensees, Congress passed and President Reagan signed into law the Firearm Owners Protection Act of 1986.
d. 2015 near Refugio State Beach near Santa Barbara, a 28 year old pipeline transporting oil from offshore oil platforms and not equipped with automatic shutoff valves, sprung a leak and before operators were alerted to the leakage and shut down the pipeline, 3400 barrels of oil were leaked into the surrounding ocean.
e. 2018 Prince Harry married Meghan Markle who many believe was already pregnant  with her son Archie in a televised wedding at Windsor Castle that was viewed by some 1.9 billion viewers.
Reflections on illegal immigration not legal immigration: “Illegal immigration is crisis for our country. It is an open door for drugs, criminals, and potential terrorists to enter our country. It is straining our economy, adding costs to our judicial, healthcare, and education systems.” Timothy Murphy, Irish-American actor and legal immigrant

© May 19, 2021 Michael P. Ridley aka The Alaskanpoet
Alaskanpoet for Hire, Poems to Admire
Poet Extraordinaire, Beyond Compare
A Unique Gift, All Recipients a Lasting Gift

Posted by Michael P. Ridley aka the Alaskanpoet at 7:45 PM