May 13, 2021 Ridley's Believe It Or Not National Leprechaun Day

US Vaccinations: As of 5/13/2021 264.7 million doses and finally after a third day of increases dropping to 2.16 million per day in the last week sounds impressive but if the rate does not increase it will take us now decreased to some 3 months to have 75% of the population vaccinated which many believe is necessary to develop herd immunity. In California 33,817,290 total doses have been given (78.3% of doses received now less than the U.S. average of 78.5%), but even with the pressure of a recall to be scheduled this fall which hopefully end Newsom’s term, California has moved up from 27th tied with Indiana to 26th tied with Maryland out of the 50 states in terms of the percentage of doses administered as a percentage of doses delivered to the states and at 36.2% of its population fully vaccinated compared to the U.S. average of 35.4% has not moved  up  from 25th among the 50 states.  A long way to go to get herd immunity in terms of getting vaccines received into arms and the percentage of the population fully vaccinated compared to other states which means a great reason to recall this inept and hypocritical governor.
Non CV News: Biden refused to admit whether Colonial Pipeline paid the ransomware hackers “DarkSide” it ransom but several sources were saying the company paid $4-$5 million to get and an encryption key to unlock its computer systems which means if our vaunted FBI cannot bring these extorters and our vaunted high tech social media and computer giants cannot prevent such ransomware attacks in the future, this may be the new business normal (like businesses paying small amount to dismiss ADA noncompliance litigation filed to terrorize small businesses); Cuomo’s arrogance and egoism should no longer amaze us as he now claims that making a woman feel “uncomfortable” is not harassment (what cave has this idiot been hiding in the last few years?); leave it to the political cartoonist to reveal the Squad’s true feelings about Israel trying to defend itself: 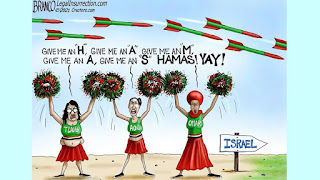 Harris’ niece is aping so many relatives of  leaders in high places in embarrassing them as this leftist rants about terrorism being practiced upon the Palestinians by the Israelis; maybe a coincidence of the revelation that Bitcoin was used to pay the ransomware in the Colonial Pipeline ransomware attack but new that the FBI and the DOJ have joined the investigation of Binance, the largest cryptocurrency exchange; in another State Street Bank of Boston was slapped by the DOJ with a $115 million fine for 7 years of defrauding customers $215 million.
Chicago Gun Violence: Hey Jackass.com is back to show that through   May   12, 2021, gun violence involving mostly persons of color shooting mostly persons of color in Chicago is alive and well with 1182 persons shot of whom 206 have died.
As always, I hope you enjoy today’s holidays and observances, factoids of interest for this day in history, a video musical link to “Jump" by Kris Kross, the fact that you resile from the rants of AOC and a quote  from Richelle E. Goodrich on leprechauns,  secure in the knowledge that if you want to send a gift for any memorable events like Father’s Day, college graduations, birthdays, weddings, or anniversaries, you know that the Alaskanpoet can provide you with a unique customized poem at a great price tailored to the event and the recipient. Please contact me for details on the pricing.
1. National Leprechaun Day—this seems like a holiday in which the creators had too much Guinness or Bushmills to drink and slept through days preceding March 17 to name a day—even today a great character chasing a pot of gold to if Irish and if not would claim to be on March 17 to commemorate.
2. International Hummus Day—celebrating that tasty snack or spread of pureed chickpeas with one’s favorited spices and juices to go with pita or naan bread and eaten since the 13th Century in the Middle East.
3.  1992 Number 1 Song USA—the number 1 song in 1992 was “Jump” by Kris Kross on a run of 8 weeks in that position to join 11 other songs reaching number 1 and 7 other acts achieving their first number 1 song. Here is a video recording by Kris Kross of “Jump”: https://www.youtube.com/watch?v=010KyIQjkTk Kris Kross was a rapper duo of 12 year old and 13 year old rappers Chris “Mac Daddy” Kelly”  and Chris “Daddy Mac” Smith who were the youngest rappers ever to hit the charts as number one and released 3 studio albums but was dissolved when Chris “Mac Daddy” Kelly died from a drug overdose on May 1, 2013 at the age of 34.
4.  Word of the Day—the word of the day is “resile” which means to recoil which probably describes the reactions of many listening to the rants of the Squad.
5.  Win a Seat and Die—celebrating the birth on this day in 1941 of up-and-coming singer Richie Valens who after a concert with Buddy Holly and A.P. “The Big Bopper” Richardson won a coin toss to board Holly’s chartered plane leaving in winter weather to the next concert and then to die at age 17 on February 3, 1959 with all aboard in a day that would be forever known as the “Day the Music Died.”
On this day in
a. 1917 3 children reported seeing the apparition of the Lady of Fatima at Fatima, Portugal.
b. 1958 Ben Cardin became the first and only person to circumnavigate the Earth by sea and by land solo in a journey that took 10 years to complete.
c.  1995 Alison Hargreaves, a 33 year old mother, became the first woman to climb Mt. Everest without the aid of supplemental oxygen or a Sherpa and later on August 13, 1995 doing what she loved to do died during her descent from the summit of K-2.
d. 1998 race riots began in Jakarta against businesses owned by persons of Chinese descent.
e. 2013 “Physician” Richard Gosnell was found guilty of murdering 3 babies born during failed abortions and other abortion related crimes and is not rotting at age 80 in a Pennsylvania state penitentiary serving a life sentence without possibility of parole.
Reflections on a world full of leprechauns: “Imagine if we were all magical leprechauns, and every wish ever made on a four-leaf clover obliged us to help others obtain their wishes. Now imagine if people simply lived like this were true.” ― Richelle E. Goodrich, Making Wishes: Quotes, Thoughts, & a Little Poetry for Every Day of the Year
Please enjoy the poems on events of interest on my twitter   account below (if you like them, retweet, and follow me) and follow my blogs. Always good, incisive and entertaining poems on my blogs—click on the links below. Go to www.alaskanpoet.blogspot.com for Ridley’s Believe It Or Not—This Day in History,  poems to inspire, touch, emote, elate and enjoy and poems on breaking news items of importance or go to  Ridley's Believe It Or Not for just This Day in History.

© May 13, 2021 Michael P. Ridley aka The Alaskanpoet
Alaskanpoet for Hire, Poems to Admire
Poet Extraordinaire, Beyond Compare
A Unique Gift, All Recipients a Lasting Gift